While the possibility of such a downturn has been discussed for weeks, and the current correction is still well within the bounds of what many analysts (including those at Morgan Stanley) had forecasted, that doesn’t mean it isn’t a nerve-rattling experience. Exhibit A: The jump in the Cboe Volatility Index (VIX), which yesterday hit its highest level since November 2020 as the SPX suffered its biggest intraday sell-off since September 2020 and fell to its lowest level since last June (even though it later reversed to close higher on the day): 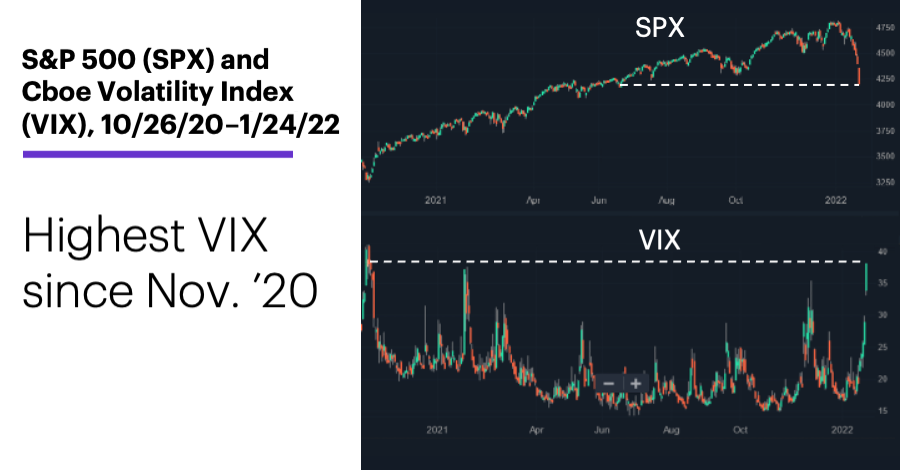 The VIX, which reflects the implied volatility (IV) of SPX options, tends to move in the opposite direction of the index, drifting lower when the market climbs and spiking higher when stocks sell off sharply. The latter part of this basic relationship reflects a simple logic: Uncertainty and anxiety about falling stock prices typically translates into a surge in SPX options IV, which pushes up the VIX. The bigger the SPX sell-off, the greater the uncertainty and the higer the VIX—usually.

Traders know to pay special attention to the VIX during market declines like the one that has unfolded this month because when the typical SPX–VIX relationship breaks down, it can signal a potential shift in market sentiment.

For example, the chart below highlights three times in late 2020 and early 2021 when the SPX fell to lower lows and the VIX—instead of pushing to higher highs as we would expect—also declined: 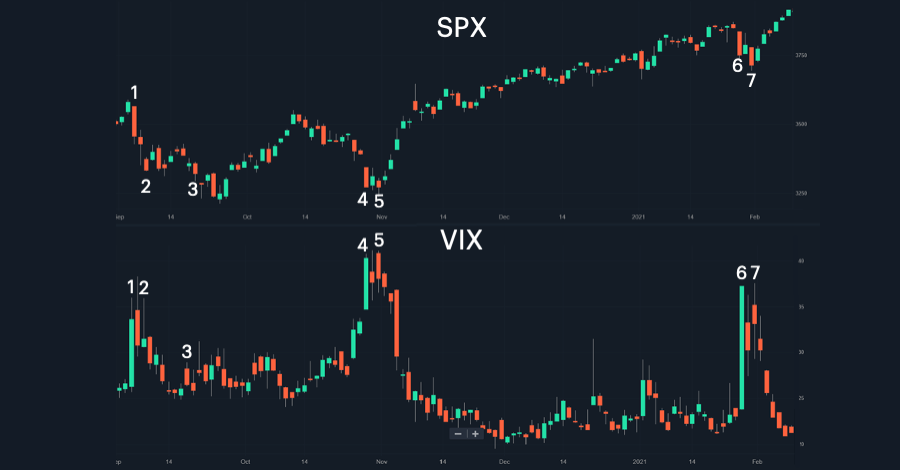 Here’s how these episodes played out:

● On October 28 the SPX fell to a one-month low (4), but when it made a lower low two days later (5), the VIX also closed lower. Result: The market closed higher the next day and rallied, with minimal downside, over the next three months.

Bottom line, when the stock market falls to fresh lows and the VIX responds with a lower reading of its own, the options market is, in a sense, signalling a lower level of anxiety despite a falling market. As these episodes illustrate, this divergence from the typical SPX–VIX pattern has sometimes been followed by stock market rebounds and rallies.

But as the September 2020 example illustrates, SPX–VIX divergence signals aren’t perfect even in those cases when they are generally “correct.” For example, the SPX fell an additional 2.5% after the September 18 SPX–VIX signal before turning higher.

Nonetheless, longtime traders know the VIX can provide very useful information about what’s going on below the market’s surface—something that can be especially important when stocks are falling and volatility is rising. If and when the market bounces and then retreats to challenge its recent lows, many eyes will likely be on the VIX.