The “China reopening” story that appeared to help fuel the recent rally in industrial metals like copper seems to have also helped crude oil bounce back after a sharp sell-off last week.1

February WTI crude oil futures (CLG3) rallied more than 3% intraday on Wednesday, topping $77.50/barrel and climbing more than 5% above their January 4 close in the process: 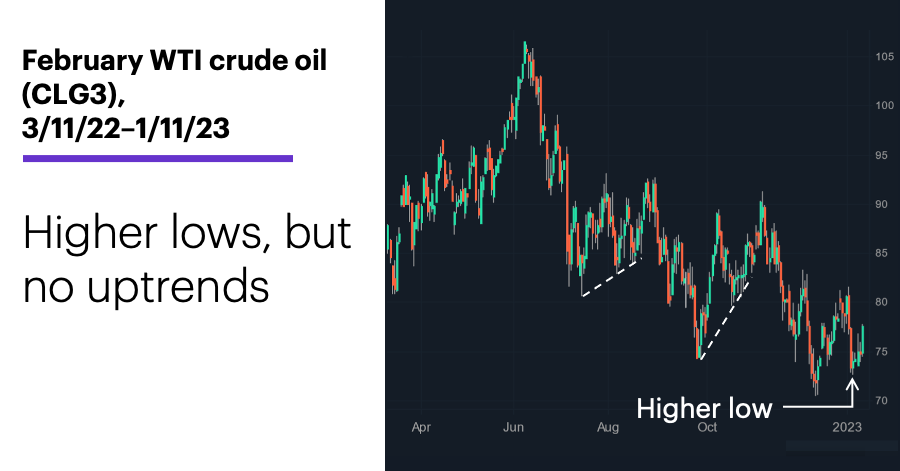 But the market is still well below its levels from June 2022, when the rally off the 2020 lows finally ran out of gas, so to speak. Since then prices have chopped their way to the downside, although last week’s low was higher than the market’s early December low. A sign the market is ready to embark on a new uptrend?

Morgan Stanley & Co. analysts do, in fact, highlight conditions that could favor higher prices later this year, but in the near term, there may be reasons for oil bulls to remain cautious. First, a glance at the chart shows that similar higher lows in 2022 (dashed lines) failed to translate into lasting uptrends.

As Morgan Stanley & Co. analysts see it, in addition to the likelihood of a modest oversupply situation in Q1, declining GDP forecasts and ongoing (global) central bank rate hikes continue to weigh on the oil market. After that, though, the picture could be more bullish: In addition to a reopening China, renewed jet fuel consumption, a decline in Russian oil production, and the US buying oil to restock its strategic reserves could support the market.2

Ultimately, the analysts see the potential for European Brent crude oil (the global oil benchmark) to climb back above $100/barrel by the middle of the year. For perspective, in recent weeks, US WTI crude oil has traded at a roughly 5%-7% discount to Brent. If that spread continued, a $100 Brent crude oil price would suggest WTI crude oil trading at roughly $93–$95.

Sellers of volatility in BOK Financial (BOKF) appeared to have done better than volatility buyers over the past month, as the stock extended its trading range. With a little more than a week until expiration, the 10,500-contract January $105 straddle described in “Large trader making volatility play?” had lost more than 40% of its value since December 7.