Summary: The coming year is likely to see weaker growth, less inflation, and the end of rate hikes, with the U.S. narrowly missing a recession, Europe contracting, and Asia offering green shoots for growth.

With excessive post-COVID consumer demand, bloated retail inventories, and the battle against inflation continuing to weigh on growth in 2023, Morgan Stanley believes global GDP growth will top out at just 2.2%, narrowly defying recession, but lower than the 3% growth expected for 2022.

The good news: Global inflation is set to peak in the fourth quarter of 2022. In fact, slowing demand, price discounts due to elevated inventories, and declining housing prices, among other factors, will help temper inflation, which should in turn prompt major central banks to pause and assess their recent historic string of rate rises. 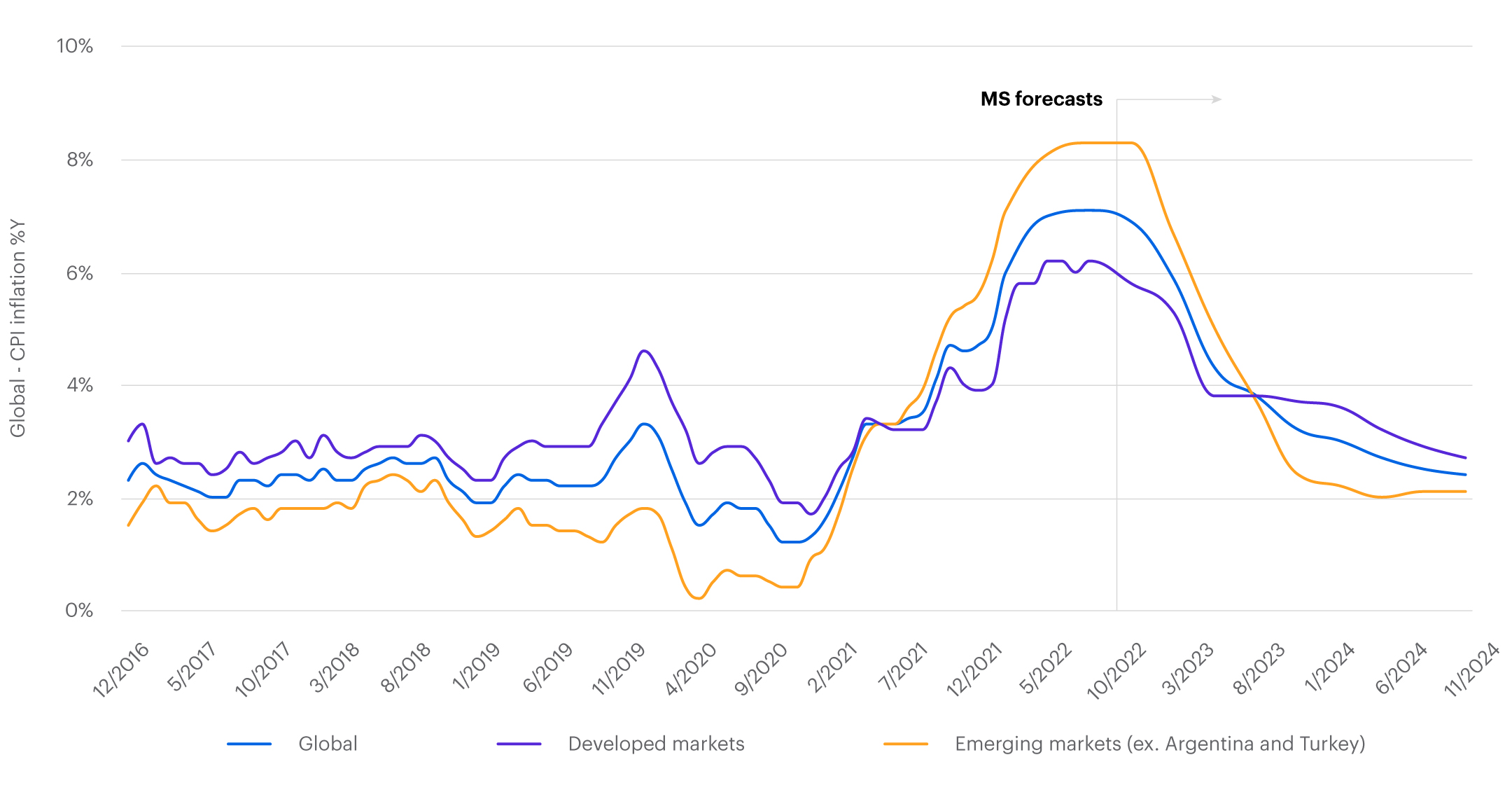 Certainly, the interplay of inflation and central-bank intervention will ultimately shape the story of economic growth for 2023.

“The last 12 months have seen the fastest increase in the Federal funds rate since 1981, and the fastest increase in European Central Bank (ECB) rates since the establishment of the Eurozone,” says Seth B. Carpenter, Morgan Stanley’s Chief Global Economist. “But as consumer goods’ supply chains recover and labor markets see less friction, we could see a sharper and broader fall in inflation, which would imply a somewhat easier path for policy and higher growth globally.”

While there are few big surprises in Morgan Stanley’s 2023 outlook, there is plenty of nuance. As always, the story varies by region, in some ways dramatically. In contrast to forecasts for Western economies, Asia could offer green shoots for growth, particularly in India, and emerging market economies could further benefit as the Fed finds its peak rate and the dollar eases.

A soft landing and tepid recovery

The combination of slowing growth and cooling inflation is likely to prompt the Fed to curb its rate hiking. “We expect the target range to reach a peak of 4.5% to 4.75% by January 2023, hold at that level through 2023 and then decline steadily throughout 2024,” says Ellen Zentner, Chief U.S. Economist. In this scenario, the U.S. economy should experience a soft landing and a tepid rebound versus the current prevailing view of a hard landing and faster recovery.

In the labor market, Morgan Stanley believes that while companies have slowed hiring, lean payrolls and difficulty in filling skilled positions argue against widespread layoffs in 2023. Net job gains have slowed markedly over the year and, together with a modest rise in labor force participation, will likely result in a slightly higher (but relatively healthy) unemployment rate of 4.3% in late 2023.

A tougher road ahead

Morgan Stanley expects the euro area economy to contract 0.2% in 2023 on the back of the ongoing energy crisis and tightening monetary policy. Inflation—which surged to an unprecedented annual rate of 10.7% in October 2022—is expected to remain well above target for the remainder of 2022 as well as 2023.

“We think the European Central Back, driven by inflation concerns, will hike rates to 2.5% in the first quarter of 2023 before it begins cutting rates in early 2024,” says Jens Eisenschmidt, Chief Europe Economist. Morgan Stanley predicts GDP in the euro region will post 0.9% GDP growth in 2024, compared with the consensus estimate of 1.6%.

On the positive side, the region’s unemployment is at a record 6.6% low, employment and hours worked are above late 2019 levels and labor market participation is higher than it was before the energy crisis. Although labor markets may weaken, the increase in unemployment may be modest.

Meanwhile, the U.K. economy grew 7.5% and estimated 4.2% in 2021 and 2022 respectively. Now, largely because of double-digit inflation, that’s slated to decline -1.5% in 2023, the greatest economic deceleration of any major economy, except for Russia. The Bank of England is thus likely to end its rate hikes at 4% and follow the Fed in cutting in early 2024.

“The ongoing hit to real disposable income will continue to weigh on consumer spending, with elevated economic uncertainty prompting people to hold onto their savings,” says Chief U.K. Economist Bruna Skarica. Additionally, a spike in mortgage rates will likely cause a sharp decline in sales of residential real estate.

Asia’s outlook for the year ahead is relatively upbeat, with three of the world’s largest economies helping to lead the way. Here’s a look at what’s ahead in the region:

In China, recovering private consumption could lead the economy to a modest recovery next year. “We’re forecasting 5% growth in 2023, with most of that coming in the second half of the year, when the economy is expected to fully reopen following the repeal of Covid-zero policies early in the year,” says Chief China Economist Robin Xing. This represents a significant improvement on our forecast of 3.2% growth for China in 2022, which is a sharp decline relative to average growth over the last decade.

In Japan, a well-developed economy and aging population have kept growth relatively tame even in the best global macro environments. To that end, Morgan Stanley’s forecast of 1.2% GDP growth for 2023 is a positive, despite being below consensus. “Households have significant excess cash and deposits that should support growth next year,” says Chief Japan Economist Takeshi Yamaguchi.

In India, the real outlier, GDP is on track to expand 6.2% in 2023 and 6.4% in 2024. According to Morgan Stanley economists, a new era of economic development, underpinned by the country’s advanced digital infrastructure, is putting India on a path to surpass Japan and Germany and become the world’s third-largest economy by 2027. “India has the conditions in place for an economic boom, fueled by offshoring, investments in manufacturing, and energy transition,” says Chief India Economist Upasana Chachra.

This strength isn’t limited to Asia’s largest economies. Many countries in the region are poised for growth in the year ahead—and that could prove positive for the rest of the world economy.

In an environment of slow growth, lower inflation, and new monetary policies, 2023 may have upside for bonds, defensive stocks, and emerging markets.

Dividends, particularly those that may grow year over year, can help contribute to long-term portfolio returns in a turbulent market.

How technology can guard against the impacts of inflation

The Global Investment Committee (GIC) is a group of seasoned investment professionals from Morgan Stanley who meet regularly to discuss the global economy and markets. The committee determines the investment outlook that guides advice to clients.
A measure of which emotion is driving the stock market. CNN tracks 7 different market indicators to calculate the index, using a scale of 0 to 100. A higher reading suggests investors are buying, while a lower reading indicates selling. 50 would signal investors are neutral.