Summary: India is on track to become the world’s third largest economy by 2027, surpassing Japan and Germany, and have the third largest stock market by 2030, thanks to global trends and key investments the country has made in technology and energy.

India is already the fastest-growing economy in the world, having clocked 5.5% average gross domestic product growth over the past decade. Now, three megatrends—global offshoring, digitalization, and energy transition—are setting the scene for unprecedented economic growth in the country of more than 1 billion people.

“We believe India is set to surpass Japan and Germany to become the world’s third-largest economy by 2027 and will have the third-largest stock market by the end of this decade,” says Ridham Desai, Morgan Stanley’s Chief Equity Strategist for India. “Consequently, India is gaining power in the world order, and in our opinion these idiosyncratic changes imply a once-in-a-generation shift and an opportunity for investors and companies.”

All told, India’s GDP could more than double from $3.5 trillion today to surpass $7.5 trillion by 2031. Its share of global exports could also double over that period, while the Bombay Stock Exchange could deliver 11% annual growth, reaching a market capitalization of $10 trillion in the coming decade.

“In a world that is currently starved of growth, the opportunity set in India must be on global investors’ radar,” says Chetan Ahya, Morgan Stanley’s Chief Asia Economist. “India will be one of only three economies in the world that can generate more than $400 billion annual economic output growth from 2023 onward, and this will rise to more than $500 billion after 2028.”

India will be one of only three economies in the world that can generate more than $400 billion annual economic output growth from 2023 onward, and this will rise to more than $500 billion after 2028.

Global offshoring creates a workforce for the world

Companies around the world have been outsourcing services such as software development, customer service and business process outsourcing to India since the early days of the internet. Now, however, tighter global labor markets and the emergence of distributed work models are bringing new momentum to the idea of India as the back office to the world.

“In a post-Covid environment, CEOs are more comfortable with both work from home and work from India,” says Desai. In the coming decade, he notes, the number of people employed in India for jobs outside the country is likely to at least double, reaching more than 11 million, as global spending on outsourcing swells from $180 billion per year to around $500 billion by 2030.

India is also poised to become the factory to the world, as corporate tax cuts, investment incentives and infrastructure spending help drive capital investments in manufacturing. 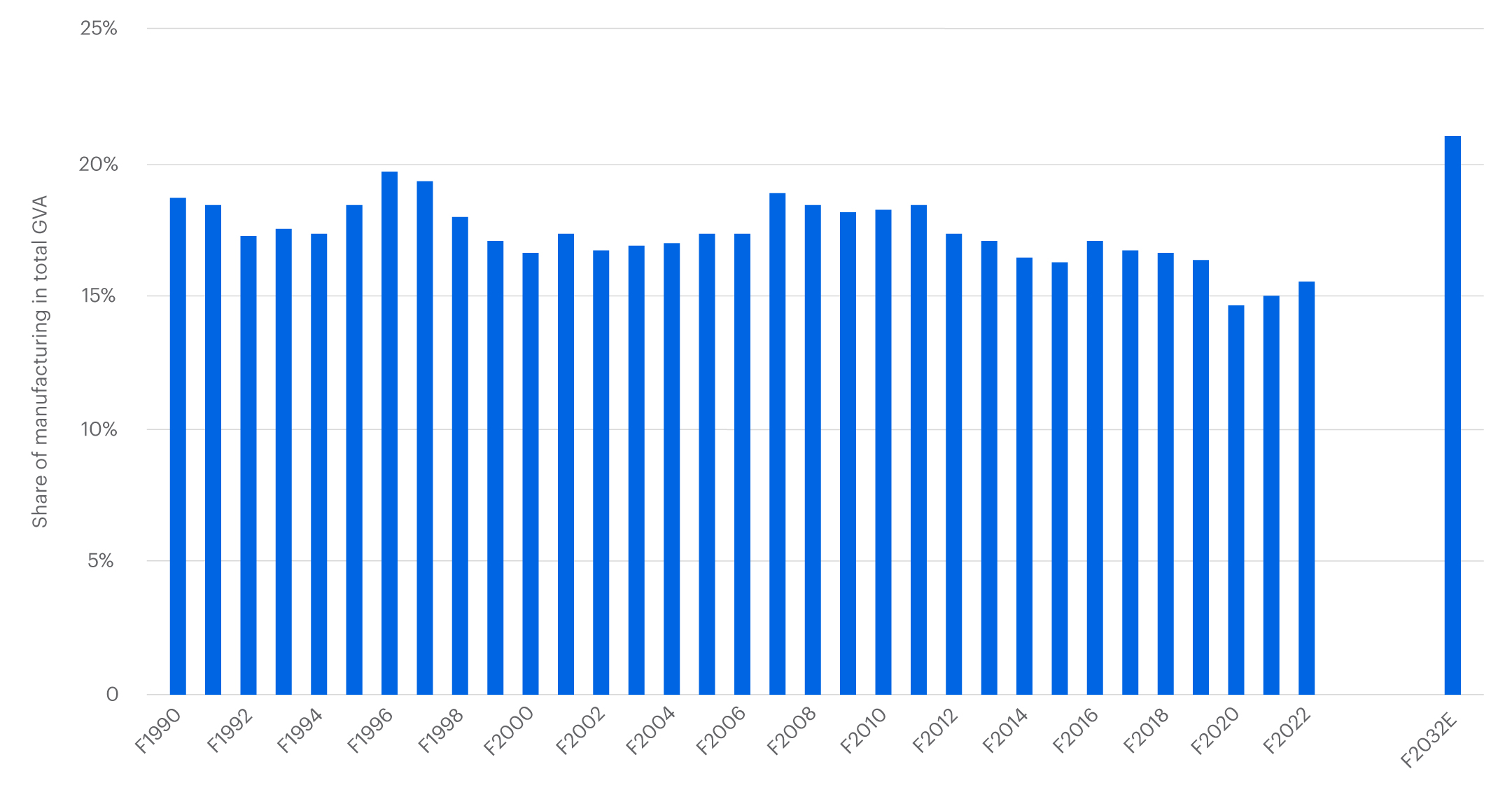 Digitalization, credit and the consumer

India began laying the foundation for a more digital economy more than a decade ago with the launch of a national identification program called Aadhaar. The system creates biometric IDs to establish proof of residence and has been instrumental in digitizing financial transactions, among other benefits.

This initiative is now part of IndiaStack, a decentralized public utility offering a low-cost comprehensive digital identity, payment and data-management system. “IndiaStack is likely to lead to a massive change in how India spends, borrows and accesses healthcare,” says Desai.

IndiaStack has broad applications, including a network for lowering credit costs, making loans more accessible and affordable for both consumers and businesses. Credit availability is an important component of economic growth, and “India is currently one of the most under leveraged countries in the world,” says Desai, whose team thinks the ratio of credit to GDP could increase from 57% to 100% over the next decade.

Indian consumers are also likely to have more disposable income. India’s income distribution could flip over the next decade, and consequently overall consumption in the country could more than double from $2 trillion in 2022 to $4.9 trillion by the end of the decade—with the greatest gains going to non-grocery retail, including apparel and accessories, leisure and recreation, and household goods and services, among other categories. 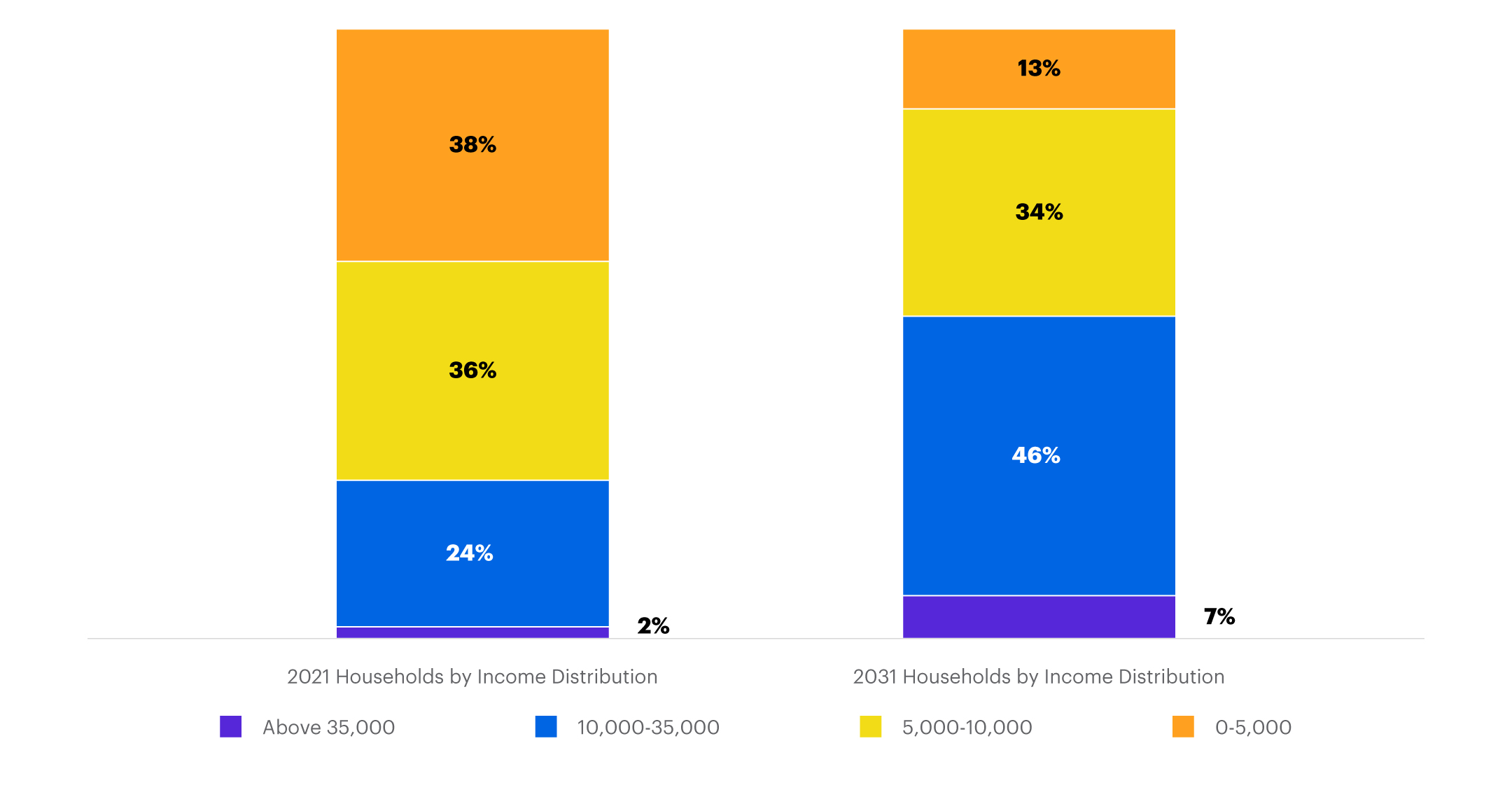 Energy is also key to economic development, as it impacts education, productivity, communication, commerce, and quality of life. All of India’s 600,000-plus villages have access to electricity, due to recent upgrades to transmission and distribution, among other changes. This could boost India’s daily energy consumption by 60% over the next decade.

Although India will need to tap fossil fuels to meet its growing energy needs, an estimated two-thirds of India’s new energy consumption will be supplied renewables like biogas and ethanol, hydrogen, wind, solar and hydroelectric power. This could reduce India’s reliance on imported energy and improve living conditions in a country that is now home to 14 of 20 the most polluted cities in the world. It also creates new demand for electric solutions, such electric vehicles, bikes, and green hydrogen-powered trucks and buses.

Investing in the India decade

Investing in India is a long-term theme, and one that comes with its share of risks, including prolonged global recession, adverse geopolitical developments, domestic policy changes, lack of skilled labor, energy shortages and commodity volatility.

While there are distinct differences between India’s evolution and economic expansion in China, many investment themes that have played out or are playing out in China—including the growth of financial services, industrials, and consumer goods—are gaining momentum.

“In the coming decade, as India’s economy transforms, we think that it will be increasingly relevant for global investors in a similar way that China is today,” says Ahya, adding that India’s next decade could resemble China’s path from 2007 through 2012. “We think that India offers the most compelling growth opportunity in Asia in the coming years.”

We think that India offers the most compelling growth opportunity in Asia in the coming years.

The source of this Morgan Stanley article, India’s impending economic boom, was originally published on November 8, 2022.

What to know about India’s economy and stock market

India’s GDP has increased 11-fold, and its equity market cap has grown by 30-fold over the past three decades. Discover what’s behind the country’s economic growth and the unique characteristics of its stock market.

The global economy is becoming increasingly decentralized as part of a trend dubbed “slowbalization.” A look at what that means for supply chains and which countries and sectors may benefit from the shift toward a multipolar world economy.

The coming year is likely to see weaker growth, less inflation, and the end of rate hikes, with the U.S. narrowly missing a recession, Europe contracting, and Asia offering green shoots for growth.