The return of inflation

The return of inflation

Summary: Investors can take steps to prepare their portfolios for inflation, which is on the rise as the economy recovers from the COVID-19 recession. Diversifying with assets like real estate, commodities, or Treasury Inflation-Protected Securities (TIPS), can help hedge the risks of higher prices.

An economic recovery from the COVID-19 recession is underway and may be on a faster track than economists expected. It’s also driving one trend investors should consider when allocating their portfolios—inflation.

Investors can help protect their portfolios from risks related to inflation in several ways, including diversifying with real estate and commodities, or by using Treasury Inflation-Protected Securities (TIPS).

Inflation is the rate at which the cost of goods and services increases over time. Several factors can lead to inflation, including higher production costs and higher demand for goods and services, often driven by higher wages and people wanting to spend more.

Rising inflation negatively affects fixed-income assets like bonds. This is because the purchasing power of money declines as inflation picks up, meaning the same amount of money buys less products and services as they become more expensive. So, fixed payments from bonds lose their purchasing power.

How is inflation measured?

Inflation is typically measured by the Consumer Price Index (CPI) or the Personal Consumption Expenditures Price Index (PCE), which is the Federal Reserve’s preferred gauge.

The chart below shows how different goods and services are weighted to calculate the CPI. The weights are intended to reflect what the average consumer spends on each. For example, many people allocate a large portion of their total spending on shelter, which comprises 33% of the CPI. 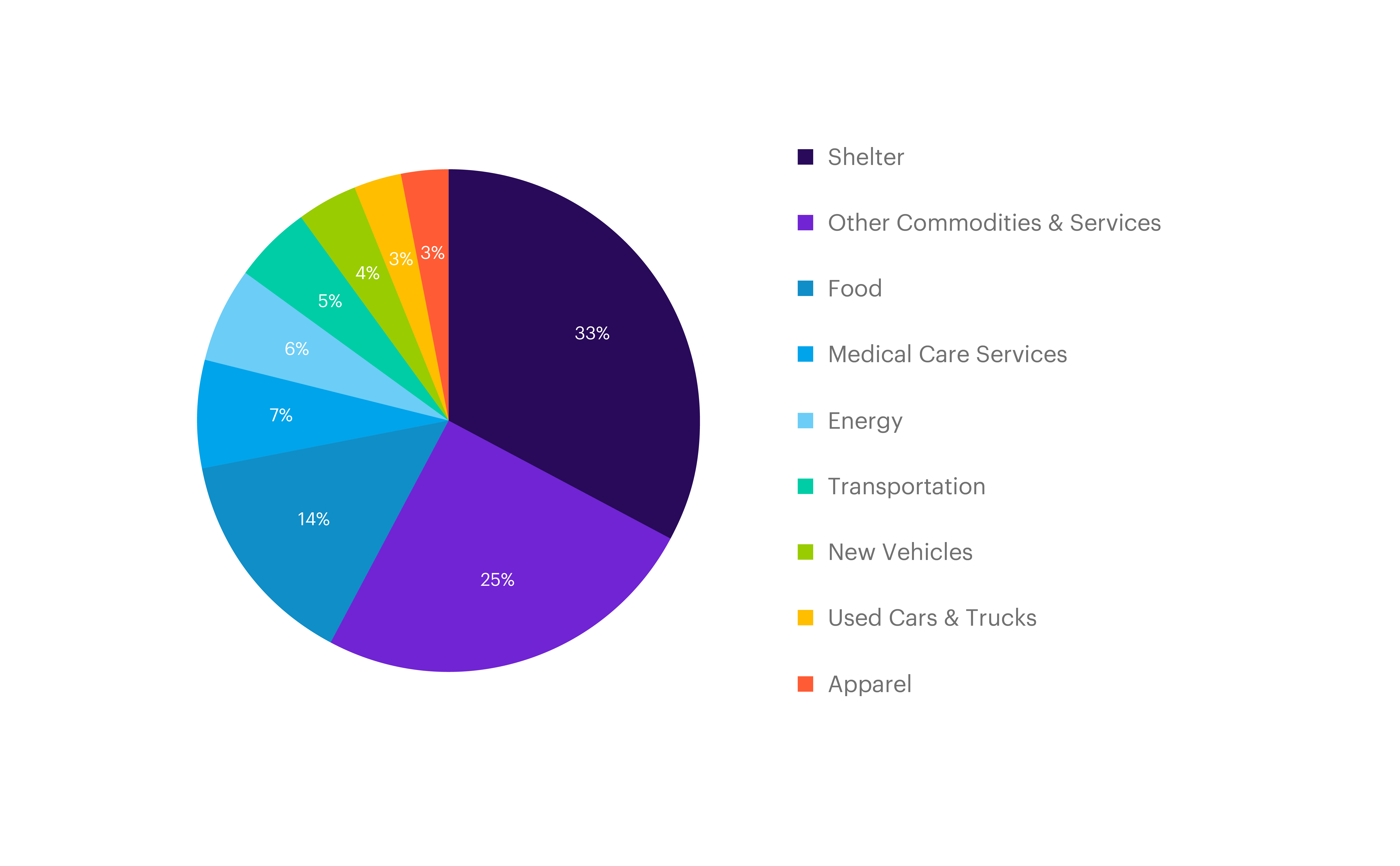 Historically, inflation has been caused by several different factors, but the most common drivers are associated with “cost-push inflation” or “demand-pull inflation.”

For much of the past decade, inflation remained at historically low levels with little movement. Until recently, it was well below the Federal Reserve’s 2% target, even as the Fed launched monetary policies aimed, in part, at increasing it.

Now, some of the recent inflation is likely due to the “base effect”—the comparison to 2020’s extremely low prices during the height of the pandemic. However, there may be other drivers that could result in inflation that remains higher beyond this year.

Where is inflation headed?

Morgan Stanley Research believes inflation may continue to rise in the years ahead and could exceed the Fed’s target. 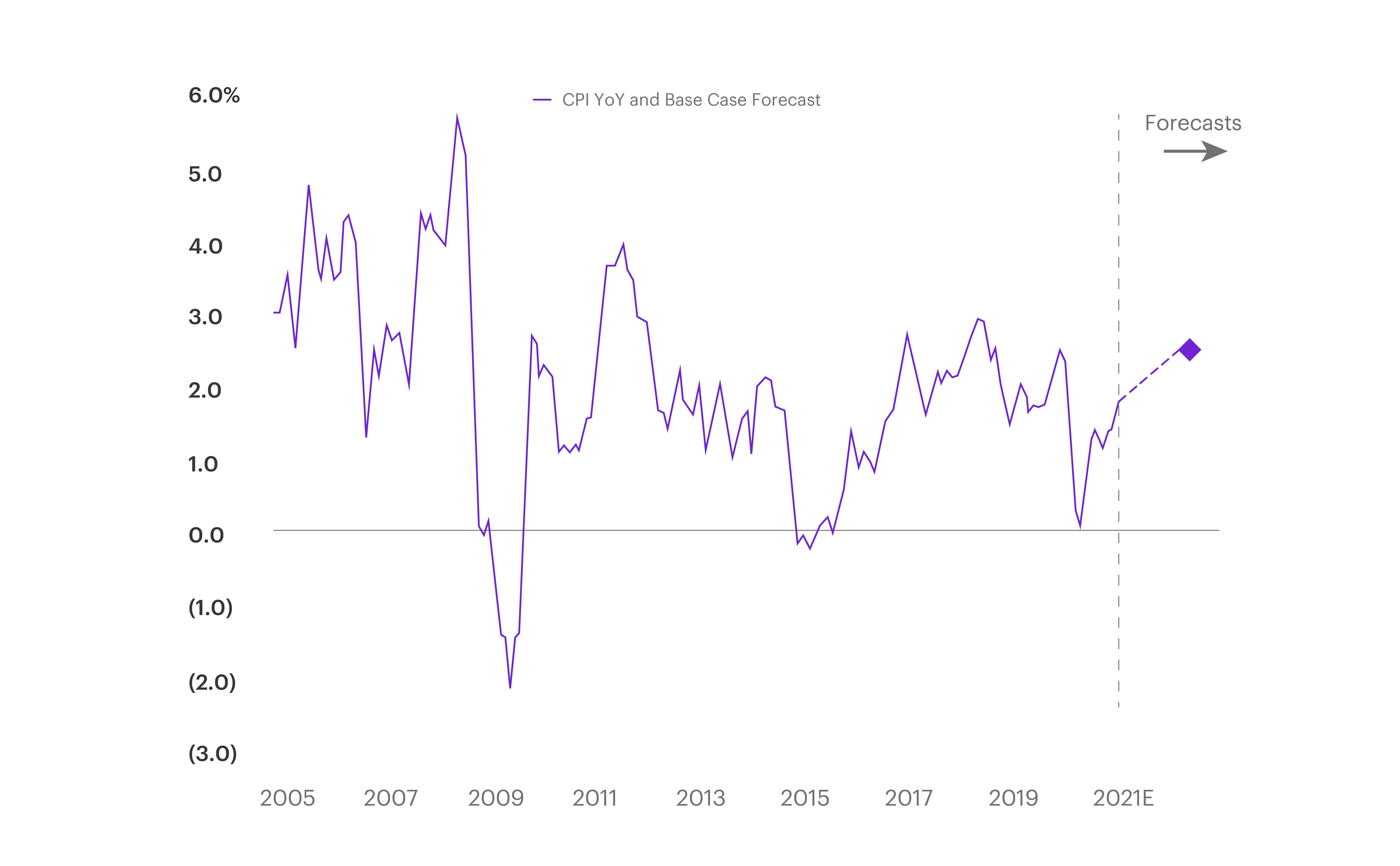 While the Fed’s monetary easing alone did little to drive inflation upward post the 2008 Financial Crisis, its more robust response to the COVID-19 recession was coupled with large-scale fiscal stimulus from the US government. This combination (fiscal spending plus money supply growth) may be more effective in driving inflation higher for longer.

Plus, the Fed’s new approach, called Average Inflation Targeting, allows inflation to run a bit higher than 2% as it focuses on improving the broader economy and employment. In other words, the Fed is now less likely to raise rates based solely on better headline employment numbers.

Finally, the years ahead may see a change in how the forces of technology, trade, and large, multinational companies (i.e., mega caps) affect inflation. In recent years, they have all played varying roles in keeping inflation from rising.

For example, technological improvements have contributed to lower prices of goods and services while automation has resulted in lower wages. Meanwhile, the rise of more mega cap companies has increased the gap between high earners and low earners, or wage inequality. Lower wages and higher inequality contributed to muted inflation over the past decade—but now policy makers are focused on attempts to normalize these trends.

Of course, there are no guarantees for how long rising inflation will last. Higher inflation could also lead the Fed to raise interest rates sooner than expected, which may lead to a shorter economic cycle overall.

What investors should consider

The bottom line is that investors may want to be prepared for a potential pickup in inflation, and they can do this in several ways.

Treasury Inflation-Protected Securities (TIPS) can be effective investments in periods of rising inflation. The principal value of TIPS increases and decreases in proportion to the change in the CPI, so they can help investors maintain purchasing power. One consideration, however, is that with rates still near historical lows, the return on the original investment may be muted.

Another way to help diversify against the risk of inflation is through exposure to real assets, like commodity-based companies or commodity-focused mutual funds or exchange-traded funds (ETFs). Real estate can also serve as an inflation hedge, whether through physical ownership or through investing in real estate investment trusts (REITs).

The source of this piece, The Return of Inflation, was originally published on April 5, 2021.

Need help getting started with bonds?

To get started with bonds, visit our comprehensive Bond Resource Center. Use our Advanced Screener to quickly find the right bonds for you. Or call our Fixed Income Specialists at (866-420-0007) if you need additional help.

Investors include bonds or fixed-income securities in their portfolio for any number of reasons—from their lower risk profile to their reliable interest payments, among other advantages. As with all investments, bonds also carry risks to be mindful of—including interest rate and inflation risk. Investors can use several strategies to help reduce the effect inflation and higher interest rates have on bonds to create an even lower risk income stream.

Why invest in bonds?

Though on the surface bonds seem complex, in reality the fixed income (bond) market is actually a lot simpler than it seems. Understanding how this important asset class works can go a long way towards helping both novice and sophisticated investors diversity their portfolio and take advantage of investment opportunities. Read on to learn more.

A closer look at diversification

When you first learned about diversification, you were probably shown a chart about spreading your investments among broad asset classes like stocks and bonds. But allocating your investments among these top-level asset classes is just the first step. If we drill down within these categories, we can uncover many more ways to diversify a portfolio.