Demystifying the language of bonds

Demystifying the language of bonds

What bond terminology do I need to know?

Can’t tell a T-note from a T-bill? Not quite sure of the difference between coupons and yields? If the answer is yes, you are not alone. Millions of investors find themselves intimidated by the seemingly impenetrable language of bond trading. Although the terminology for bonds is certainly different than that of traditional stocks, once you understand the basic concepts, you’ll see it’s actually relatively straightforward and easy to grasp.

Understanding the language of bonds can go a long way towards demystifying them, so you’ll be more confident in adding this important asset class to your portfolio. Let’s take a closer look at some common terminology, starting with the most basic term of all.

What exactly is a bond?

Think of a bond as a loan you’re making to whoever is issuing the bond, whether it’s a government, a company, or a municipality. In return for your loan, the issuer is bound to adhere to the terms of the loan ( i.e., pay you back with interest). These terms may vary, but an investor is typically due fixed interest payments on stated dates, and a return of their principal upon maturity of the bond.

Here is some of the other common terminology used with bond trading (also known as fixed income trading).

Remember, bonds are simply a loan you make to the issuer that is repaid with interest. In exchange for your principal investment, the issuer will typically pay you a fixed interest rate which is known as a coupon. Although yields and prices might fluctuate throughout the life of the bond, the coupon rate will remain constant for most bonds. Coupon payments are most commonly paid semi-annually, but can also be paid monthly, quarterly, or annually. For example, if you purchased a $1,000 bond with a 5% coupon paid semiannually, you would receive $50 total in coupon payments a year, or $25 every six months.

Yield is the return earned on a bond. It is usually quoted as a percentage, calculated based upon the bond price and interest payments received. Yield to maturity is the most commonly quoted yield calculation. It represents the total return received on a bond if it were to be held until its maturity date. Yields have an inverse relationship with the price of a bond. That means that bond prices fall when yields rise—and vice versa.

Here’s an example of how yield works: Suppose you buy a bond and interest rates later rise. The value of your bond may decrease because it offers a yield that is lower than new issues in the market. If you would like to sell your bond, you may have to sell for a lower (discounted) price to compensate. Conversely, if rates decline after you purchase your bond, the value of the bond may increase because your bond now offers a higher yield than new issues in the market. Remember that coupon (or interest rates) remain constant for the vast majority of bonds. As a result, other investors will be willing to pay a higher price (premium) for your bond.

Rating agencies, such as Standard & Poor’s (S&P) and Moody’s, measure the creditworthiness and financial strength of an issuer by assigning a credit rating. An investment-grade rating refers to bonds that are rated BBB- (S&P) or Baa3 (Moody’s) and higher. Investment-grade bonds generally have a lower likelihood of incurring a payment default. That means they’re for the most part safer investments than their lower-rated counterparts. On the other hand, high-yield bonds, also known as junk or speculative-grade bonds, refers to debt rated BB+ (S&P) or Ba1 (Moody’s) and below. Speculative-rated bonds have a much higher probability of default. There is more risk involved. As a result, these bonds typically carry higher yields to compensate the investor for the additional risk assumed. 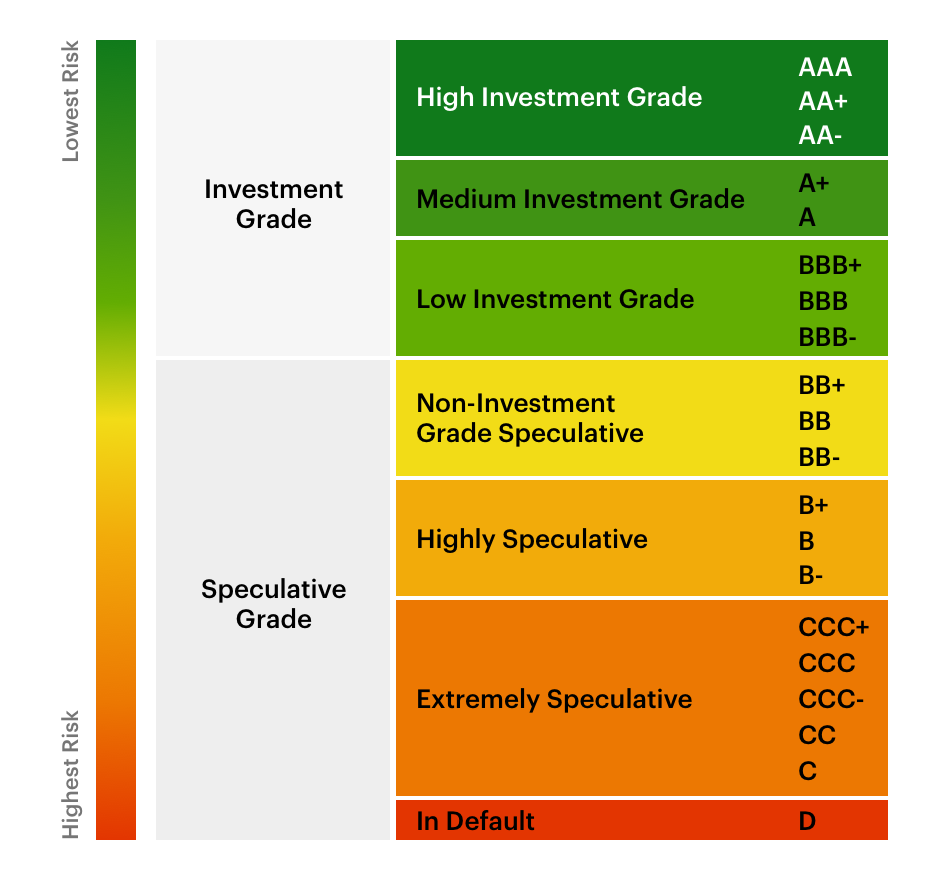 When determining an appropriate time horizon for a bond investment, you may consider when you will need return of principal on your initial investment. Are you investing to specifically meet a certain financial goal, such as tuition payments or retirement? This information can help you decide a suitable maturity date for your bond. Maturity refers to the date on which the investor will have their principal repaid by the issuer and when the issuer’s obligation will end. A bond’s maturity date can range anywhere from less than a year to 30 years or greater. Yields are typically higher for bonds with longer maturities. Why? It’s the same concept as to why a 30-year mortgage typically costs more over time than a 10- or 15-year mortgage. Similar to mortgage companies, bond investors are granting a loan. Greater compensation is required for risks associated with a longer time period.

It’s also important to understand if your bond investment contains any redemption features. A good example is known as a call provision. A call provision gives the issuer the right to “call” (redeem) their bonds prior to maturity—causing investors to receive their principal back sooner than expected. For the most part, if a bond is called early, it is paid off at a slight premium to par. This scenario most often occurs when interest rates decline, and it becomes beneficial for issuers to call outstanding debt in order to issue new bonds at lower rates. Reference the bond’s call schedule for terms pertaining to its call features.

Need help getting started with bonds?

To get started with bonds, visit our comprehensive Bond Resource Center. Use our Advanced Screener to quickly find the right bonds for you. Or call our Fixed Income Specialists at (866-420-0007) if you need additional help.

What is a bond?

A bond is a security that represents an agreement to repay borrowed money. Learn more about how you may be able to use bonds to add income.

Why invest in bonds?

Though on the surface bonds seem complex, in reality the fixed income (bond) market is actually a lot simpler than it seems. Understanding how this important asset class works can go a long way towards helping both novice and sophisticated investors diversity their portfolio and take advantage of investment opportunities. Read on to learn more.

Bonds are issued by 3 entities: U.S. government, state and local governments and corporations. Read this article to learn more.