The US stock market was spreading the holiday cheer last week, adding more record highs to its impressive year-end rally—and, with just six trading days left in 2019, giving itself a fighting chance to ring up its best year since 1997. 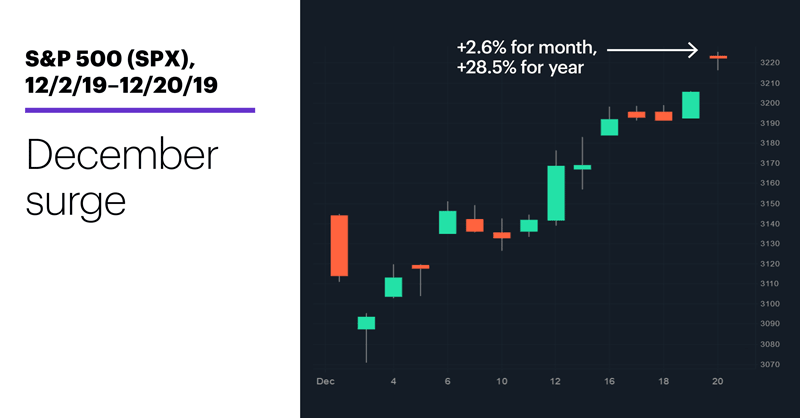 The week’s biggest news story—the House’s impeachment vote on Wednesday—turned out to be a non-event for the markets. Although it monopolized the 24-hour news cycle, traders appeared to shrug off the proceedings (stock hit fresh highs on Thursday), likely because of the reality that the Senate isn’t going to follow the House’s lead.

Instead, traders appeared to focus on the market’s seasonal momentum, as well as mostly encouraging economic data, including solid industrial production, housing starts, and consumer sentiment numbers, along with a GDP reading holding steady at 2.1%  Tech shares led the way, with small caps a close second:

Power moves: Axsome Therapeutics (AXSM) jumped 71% to $79.80 on Monday after successful clinical trial results for its depression medication. By Friday the stock had extended its gain to more than 100% for the week. Wave Life Sciences (WVE) took the opposite path, tumbling -55% to $16.79.

Who says Brexit drama is over since Boris Johnson score his election coup? After rocketing to a contract high of 1.3548 on December 13, March British pound futures (6BH0) gave it all back—and then some—last week, closing Friday near a nearly three-week low around 1.3030.

If you have haven’t done your Christmas shopping yet, time to panic. But you’ll have a few extra hours, because in addition to being closed on Wednesday, US equity markets knock off early tomorrow (1 p.m.), and the economic calendar is light:

Holiday hours. Traders, like everyone else, tend to squeeze in a little extra time off toward the end of the year, which typically results in lower-than-average volume and volatility around Christmas. The stock market pulled a fast one last year—the SPX tanked 2.7% on Christmas Eve, then jumped 4.9% the day after the holiday—but that was the exception that proved the rule.

Nonetheless, traders who have made the effort to log in the day after Christmas have often gotten a bullish surprise in their stockings: a stronger-than-average day for US equities, with the SPX closing higher 69% of the time— since 1960, the highest percentage of any of the five days before or after Christmas.

12/19/19
One of these long-time trading mainstays recently challenged resistance.

12/11/19
Even if small-cap momentum doesn’t last, it may offer short-term trade opportunities. And if it does have legs…