Two big call trades gave biopharma company Cytokinetics (CYTK) one of the market’s highest call-put ratios (3,647 to 1) on Tuesday. With the stock trading mostly between $39.50–$41, both the December $50 and $55 call options had volume of 5,500 contracts: 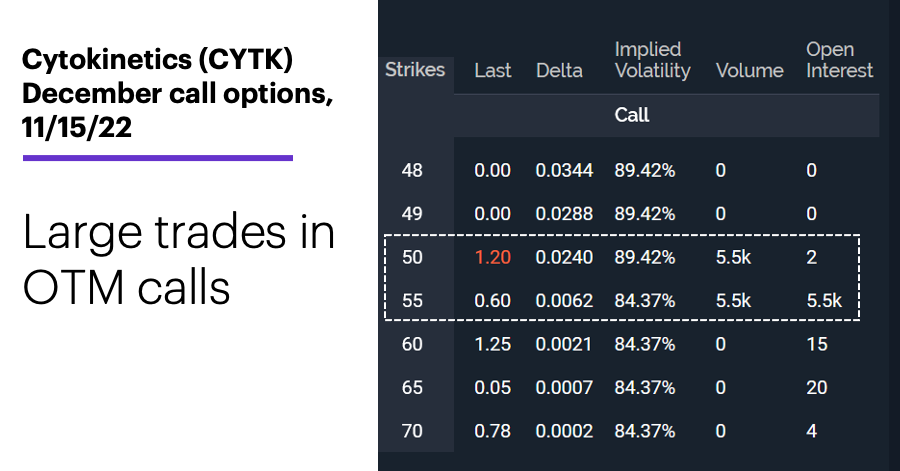 Yesterday, open interest (OI) in the $50 calls was exactly 5,500 contracts, while OI in the $55 calls had dropped to 1,400. While that suggests Tuesday’s trades could have been a position adjustment (closing some or all of an existing position in the $55 calls and reopening it in the $50 calls), it still means an options position representing $27,500,000 worth of stock was sitting on the books.

Although CYTK fell on Wednesday, it’s rallied as much as 12.4% since November 7, when it was down 33% from its September highs: 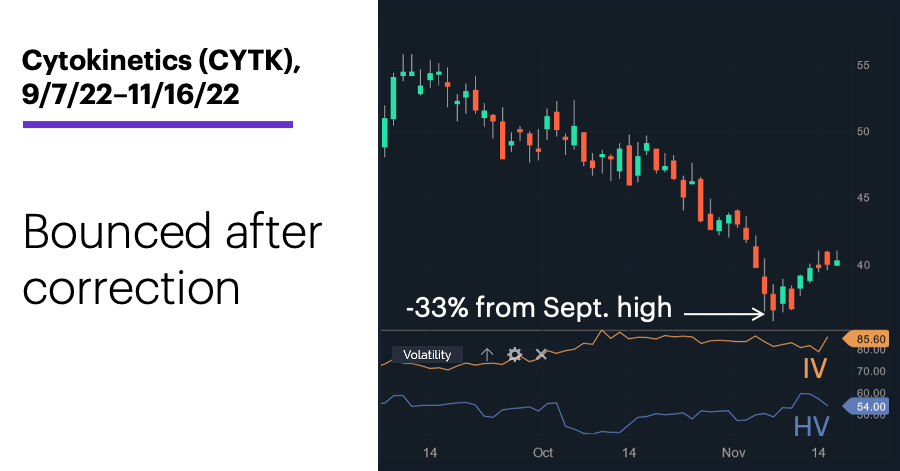 It’s impossible to know whether an options position is a hedge, part of a larger position, or an outright bullish or bearish trade. But for the sake of argument, let’s consider a trader who saw CYTK’s recent activity as an indication of near-term bullish interest, since the stock would need to be above the strike price ($50) on December 16 (expiration) for the options to have any value.

“Vertical spreads,” which combine long and short options with the same expiration, are one way some traders try to manage the downsides (especially time decay) of long-only options trades. A vertical spread has limited upside and downside, but it is also less expensive than an outright long position. The following chart shows the risk-reward profile for a bullish vertical spread: 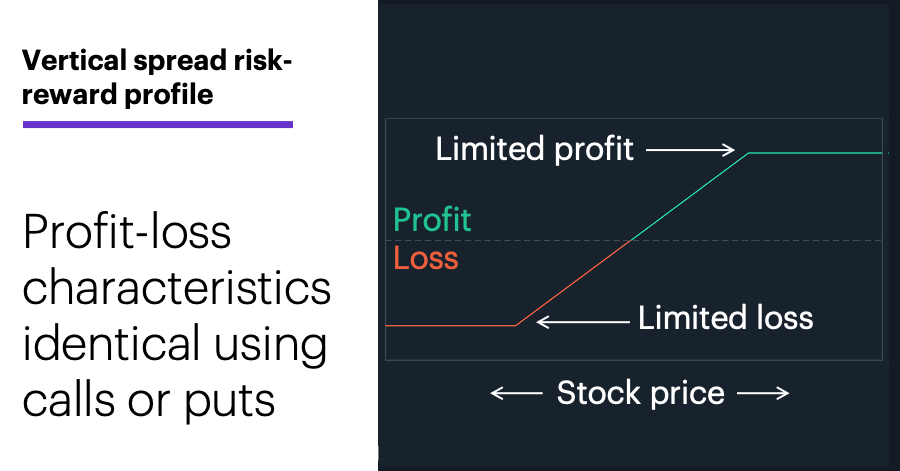 A key point: The profile is the same regardless of whether the spread uses calls or puts—it can profit if the underlying stock rallies, and will lose money if the stock falls.

A typical bullish vertical call spread would combine an at-the-money (ATM) call and a short and out-of-the-money (OTM) call—using CYTK as an example, perhaps a long December $40 call and a short $50 call. The premium collected from the short call makes the spread less expensive than a long ATM call, but profits are capped even if the stock continues to rally above the upper strike price.

The bullish put spread inverts this concept: It combines a short ATM put and a long OTM (lower-strike) put—e.g., a December $40 put and a December $30 put. An important difference is that, while a bull call spread requires a cash outlay (a debit), a bull put spread is established at a credit—i.e., the trader collects premium—since the ATM put will have a higher price than the OTM put.

Why would a trader use one version of the spread over the other? Their respective breakeven points provide an insight:

Yesterday morning a trader would have paid roughly $2.75/share to establish a CYTK December $40–$50 bullish call spread. That means, at expiration, the stock would have to be above $42.75 for the position to be profitable.

By comparison, a trader would have collected roughly $2/share from a CYTK December $40–$30 bullish put spread. In this case, the position would be profitable at expiration if the stock was above $38.

In other words, the put version of the spread has a smaller potential profit than the call version, but a higher probability of producing some profit, since it could be profitable even if the stock drifts slightly lower. Which version is preferable in a given situation will depend on what a trader thinks the stock will do over the lifetime of the position.

11/16/22
Traders and investors in the metals space can’t afford to lose track of what the dollar is doing.

11/15/22
When a breakout move looks like the running of the bulls, experienced traders know the importance of not getting stampeded.