Trading beyond the IPO

Trading beyond the IPO

A couple of months ago, 2019 was still basking in its status as the “Year of the IPO,” spurred by a flood of high–profile launches, including several so-called “unicorns”—tech companies with billion-dollar valuations. With a stock market rebounding off its December 2018 lows and ultimately working its way toward new record highs in July, many of the newly christened stocks posted remarkable early gains.

That was then, this is now. With the majority of the 2019 crop already harvested, and returns in many of the early gainers coming back to earth in August, the IPO chatter has died down a bit, and traders are looking more at the performance of individual stocks rather than the possibilities of IPOs as a group.

One of this year’s IPOs has distinguished itself by being a profitable company.

One of the bigger new issues of the year, video conferencing unicorn Zoom Video Communications (ZM), has experienced some of the rollercoaster ride common to many new stocks. After closing its first day of trading on April 18 at $62—81% above its IPO pricing level—the stock rallied another 66% to its June 12 high close of $102.77: 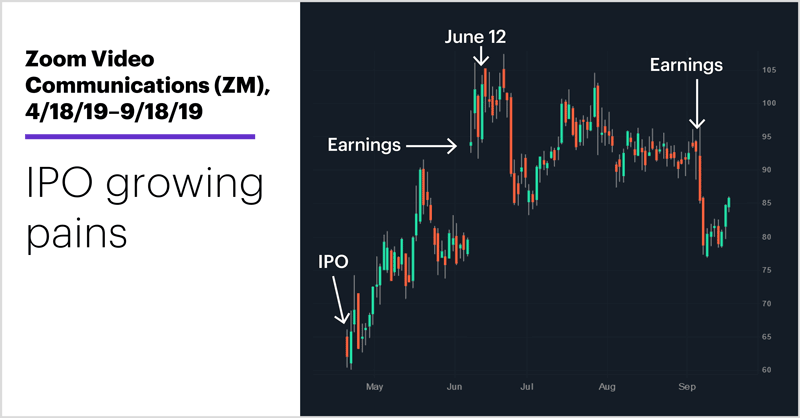 After that, though, the stock moved mostly sideways to lower, seeming to settle into the $90s in August before dropping as low as $76.81 in early September—that’s around 25% below the June 12 close. Just another case of a high-flying IPO coming back to earth?

Aside from the fact that many other IPOs have come off much (much) more, there was something that set ZM apart from many of its IPO brethren when it launched, and which continues to distinguish it now.

While profits are a longer-term goal for several of this year’s newly minted stocks, Zoom was not only turning a profit before its IPO,1 it’s continued to make a buck, as its September 5 earnings beat showed. Among the highlights of Q2’s nearly 100% revenue increase:

●Revenue from markets outside the Americas more than doubled from last year.2

But the performance numbers themselves may be one reason Baird analysts this week cited Zoom’s dip as a buying opportunity, based on the company’s profitability, industry-leading growth, and the potential of such initiatives as the Zoom Phone, a “cloud-calling” platform that allows users to bypass video.4

Although ZM shares experienced an immediate pop in the wake of the favorable coverage, one piece of good press won’t make or break a stock. In the short-term, though, one price level looms large: bullish traders will be looking for the stock to hold its September 9–10 lows around $77 as evidence Zoom is again ready to live up to its name.

4 MarketWatch.com. Zoom Video stock gets a boost after Baird joins the bulls. 9/16/19.

09/17/19
Strike interrupts GM upswing, but bulls could be back on the job sooner than some people think.