Some traders may have perked up their ears on Wednesday when reports emerged that Western Digital (WDC) call options were in heavy play, a development that was posited in some quarters as bullish bets in the runup to the company’s October 24 earnings release.1

But there’s been months of interesting action in the world of WDC, manufacturer of digital storage of all stripes (hard drives, flash, cloud).

The stock certainly got a bump on Wednesday, rallying 2.5% and following through by more than 1% yesterday. The upswing interrupted a seven-day pullback that came close to testing the breakout level of the July–August trading range: 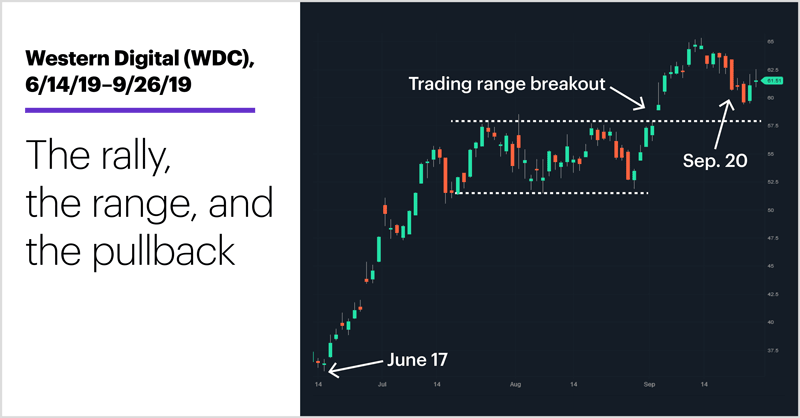 And despite a month-long consolidation and the recent pullback, yesterday WDC was still up around 70% since June 17. At the September 13 high, that gain was 80%.

Not a bad three months of work.

One smaller point on the chart merits special attention, though: September 20, the biggest down day of the pullback, which occurred the day WDC announced it was selling off its IntelliFlash (flash storage) business.2 Although that may have caught some market participants off guard, at least one analyst saw it as a company-strengthening move as WDC solidifies its core storage business.3

Whether the stock continues to build on the gains of the past two days, or retreats to formally test the prior trading range (or declines further), a longer-term chart reveals how far the stock has come in recent weeks, not to mention how far it had previously dropped.

Many traders have likely noted WDC’s June low occurred in the vicinity of the December low, a “double-bottom” that many chartists would interpret as a possible long-term trend-reversal pattern: Prices experience an extended decline, rally, decline again to test the previous low, then rally again; when prices produce enough bullish momentum to push above the intermediary peak between the two lows (in this case, the April high), the pattern is generally considered “confirmed.” 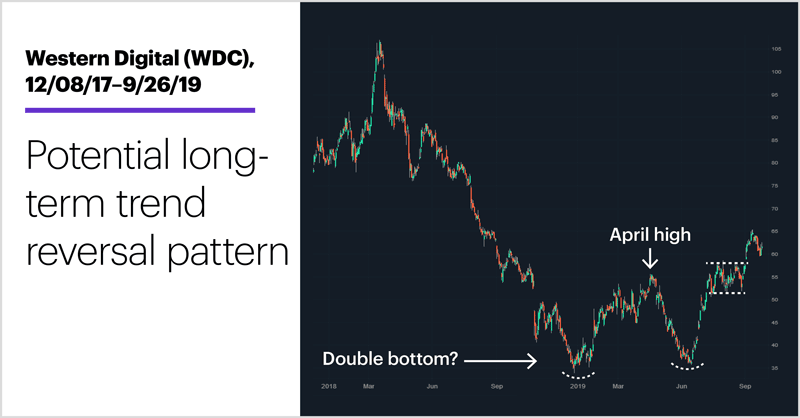 But there’s a reason a question mark follows the “double bottom” reference in the chart. The stock has clearly established twin lows (and racked up a big gain after the second one), but the real question is whether a longer-term uptrend will emerge—say, one that could eventually challenge the stock’s early–2018 highs above $105.

With earnings approaching, we may find out fairly soon if those options traders were on the mark.

09/25/19
A couple of stratospheric rallies get put to the test—in more ways than one.

The upside of downside

09/24/19
Taking stock of where the market is positioned heading into the final quarter of 2019.