There wasn’t a whole lot of trading in iRhythm Technologies (IRTC) options yesterday—in fact, halfway through the trading day, fewer than 60 contracts had changed hands.

But that doesn’t mean options traders hadn’t already bulked up on options of the cardiac health tech company, which appeared on the LiveAction scan for high open interest (OI) yesterday: 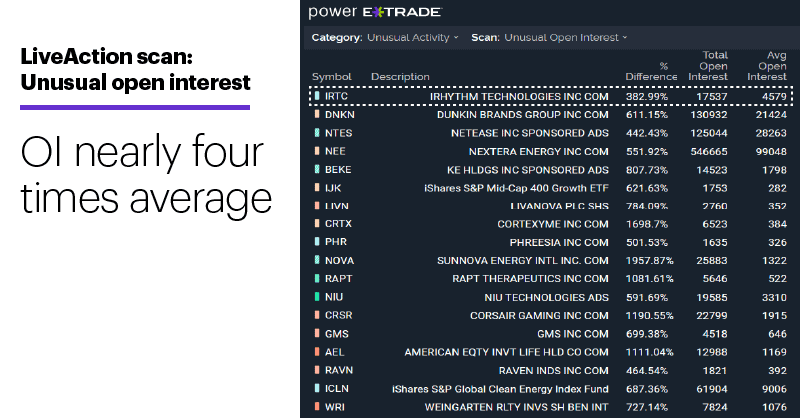 Many traders keep tabs on OI (the number of unclosed options position) because it can highlight the level of trader engagement in a particular stock, as well as which way those traders may be leaning. And while IRTC’s OI wasn’t exceptionally high (around 3.8 times average), what may have interested some traders was how those options positions were distributed.

First, most of the OI was in December contracts. Second, the overwhelming majority was in puts. With the stock trading around $255 yesterday morning, here’s how things were balanced between calls and puts in the most-active strike prices: 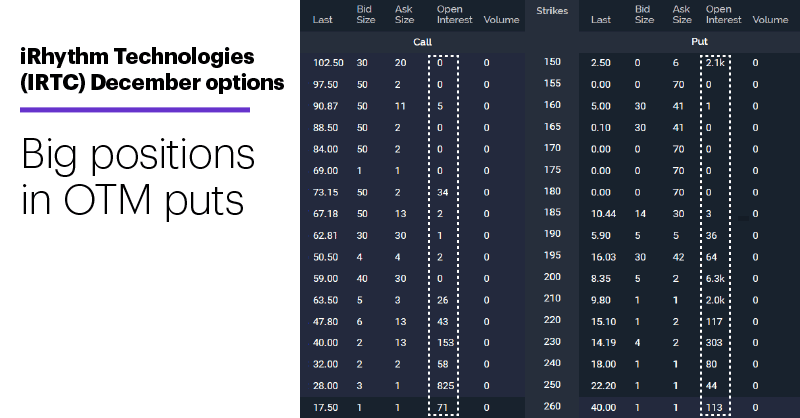 Not only was total put OI roughly five-and-a-half times call OI, most of the put positions were in deep out-of-the-money (OTM) strikes—$210 or lower. Such a heavy tilt toward puts doesn’t automatically mean options traders are betting on a sharp drop in IRTC (or that they’re correct about that forecast, if they are). But it’s worth sifting through the possible implications, from bullishness to bearishness:

1. Put sellers could have initiated most of these trades, which means they’re betting the stock will rally or at least hold steady.

3. Traders bought puts because they do expect IRTC to retreat.

No. 1 may be the weakest argument since, all else being equal, most traders buy calls to play the upside, instead of selling puts (even if that may not always the best choice). And while hedging (No. 2) isn’t overtly bearish, it does at least reflect an acknowledgement of potential downside. No. 3 speaks for itself.

The price chart below adds a little more perspective. It shows IRTC skyrocketed 362% from its March low to Monday’s record high of $267.05 (one day after surging on an earnings beat1), which is a little above the average current Street analyst target of $256:2 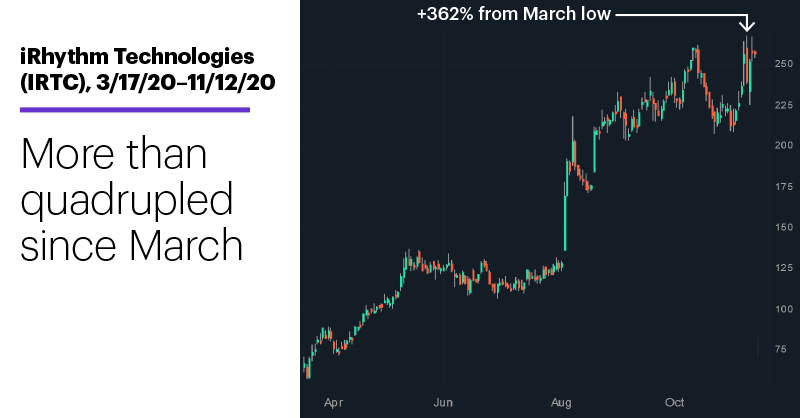 That’s quite a ride—maybe the type of ride that makes traders consider the possibility that a cool-down could be in store, even if the stock’s longer-term prospects still contain plenty of upside.

Trading the air up there

11/12/20
Airline stocks may be a crowded trade again, but savvy traders may have reasons to be selective about their seat assignment.

11/11/20
Traders may look to add digital retailer to their shopping lists—if a potential historical trend plays out again this year.

11/10/20
Pandemic-era winners aren’t immune to sell-offs, but was Monday’s disruption a warning to bulls—or an opportunity?