It looked like a “fail” for most of the day, but after another last-minute rally, the stock market was still withholding its final grade of the S&P 500’s (SPX) test of a key support level.

After trading slightly above its December 2018 low of 2,346.58 earlier in the week, yesterday the SPX broke below it, plummeting nearly 11% to 2,280.52 before a 3.8% surge in the final 20 minutes of trading helped cut the day’s loss in half and push the index back above the support threshold: 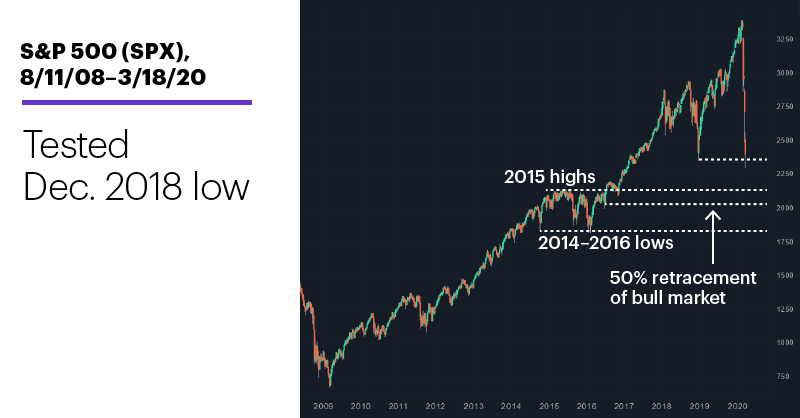 While the intraday plunge to a three-year low doesn’t mean the test of the December low support level (which is also the 38.2% retracement of the 2009–2020 rally) failed, immediate additional declines below it would—in which case many traders would be looking at the possibility of a test of the 50% retracement level (around 2,038), which the chart shows is in the zone between the SPX’s 2015 highs and its 2016 lows.

But there was another interesting development yesterday: The Cboe Volatility Index (VIX) closed virtually flat (up less than 1%) even though the SPX lost 5.2% for the day, suggesting that investor fear was relatively muted despite the new market lows. Not that anyone would likely believe a significant bottom is in, but maybe enough to have some traders thinking about a possible short-term bounce, especially since the SPX closed back above the December low.

Developments in the crude oil market didn’t make things easier for the stock market. April WTI crude oil futures (CLJ0) tanked 25% at one point, falling almost to $20/barrel—as low as oil has been since early 2002—before rebounding late in the day: 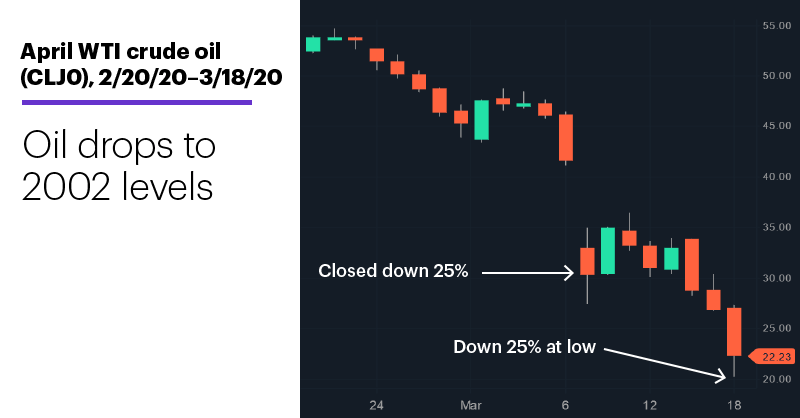 Yesterday Saudi Arabia effectively tripled down in its price war with Russia by announcing it intended to maintain near-record oil production levels for the foreseeable future.1 The sell-off came just eight days after the 25% price collapse on March 9, when Saudi Arabia announced it was slashing prices in response to Russia’s refusal to go along with OPEC production cuts.

Trading note: Yesterday, trading in US stocks was halted (for 15 minutes) for the fourth time in the past three weeks, as the SPX fell 7% below Tuesday’s close, triggering the first of the market’s three “circuit breakers.” (So far, the second and third circuit breakers have not been triggered.)

With daily price swings in US stock indexes regularly exceeding 5%, and many individual stocks moving much more than that, it’s a good idea to remember that volatility is a double-edged sword: Experienced short-term traders may welcome a certain amount of it, but it’s increasingly dangerous as the dosage increases. The same applies to leverage.

Remember that in fast market conditions—not just after trading halts—market orders can get filled far from where prices were when you entered your trade. By using limit orders to enter positions, you’re guaranteed not to get filled at a worse price than you expected—with the caveat that you may not get filled at all.

But missing out on what may have been a good trade is always preferable to getting stuck in a bad one.