Traders who thought that this was shaping up to be a relatively uneventful October saw the month’s famed volatility crash the party in the 11th hour, as a modest pullback got a little more real after yesterday’s 3.5%- drop in the S&P 500 (SPX).

While investors may be talking about the COVID second wave, stimulus gridlock, and the election—macro catalysts that are certainly in play right now—traders are likely in the process of getting a handle on the key price levels that may chart the market’s near-term course.

Looming large is potential support around 3,210—the level of the July upside breakout that culminated in the index’s early-September record high. The September pullback reversed after testing this level, and yesterday’s drop left no obvious technical barriers to another challenge: 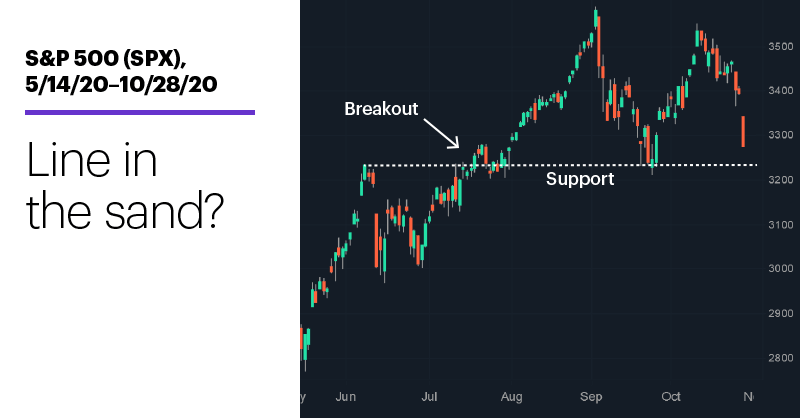 One reason this level could represent a key test for the SPX is that a clear breakdown below it would, for many technicians, confirm a so-called “double top” pattern (consisting of the September and October highs) that implies a more significant sell-off. There’s nothing mystical about this potential scenario: A double top simply means an up-trending market rallies to a new high (in this case, the September high), pulls back, rallies to challenge that high (the October high), but turns lower again—a lack of bullish conviction that suggests the uptrend could be running out of steam. A breakdown below the low separating the two highs effectively confirms the “top” and opens the door to further selling.

That’s still a bigger-picture consideration. Getting back to the here-and-now, there were a couple of other interesting aspects to yesterday’s price action. First, the Cboe Volatility Index (VIX) jumped to its highest level since June: 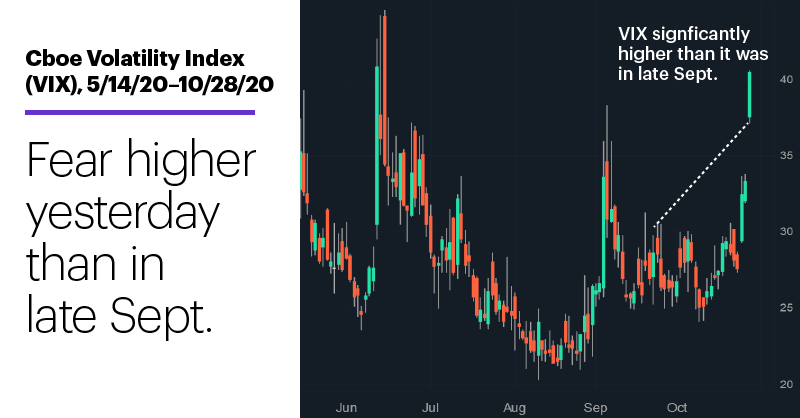 That suggests the market was experiencing more fear yesterday even though the SPX was still trading above where it was at the September 23–24 lows. Ideally, the VIX should be lower—less “fearful”—than it was in late September, since the SPX itself is higher than it was then. In other words, some traders would see yesterday’s development as a signal the market still has more potential downside.

There’s also the fact that days like yesterday, while rare, have typically been followed by at least a day or two of additional selling. Here’s what happened after 29 other times the SPX fell more than 3% intraday and closed 3-4% lower:

1. Over the next three days, the SPX closed lower more often than it closed up.

How closely this coincides with a test of support and a potential bounce remains to be seen.

This year has repeatedly illustrated how uncertainty and emotion can challenge the best-laid plans of all types of traders and investors. But the odds still favor those who makes plans, adjust them when necessary, and manage risk to protect them when they’re wrong.

10/27/20
High-flying wholesaler rallies in the face of yesterday’s sell-off. Will traders be putting options in their shopping carts?

10/26/20
Traders step gingerly as election season winds down and earnings season ramps up.