Thanks to a bullish start, the US stock market got back into the plus column last week, even if it finished the race with a bit of a bearish limp.

On Monday and Tuesday, talk of a $1 trillion infrastructure spending program, news of Fed corporate bond purchases, and a record-breaking retail sales report helped stocks bounce back from their steepest pullback in three months, but renewed coronavirus worries closed out the week on a nervous note.

After initially falling to a three-week low early last Monday, the S&P 500 (SPX) pivoted to the upside to close higher on the day, then followed up with a 1.9% rally on Tuesday. But the market wobbled for the remainder of the week, and—in a reversal of Monday’s pattern—gave up early gains to close in the red on Friday: 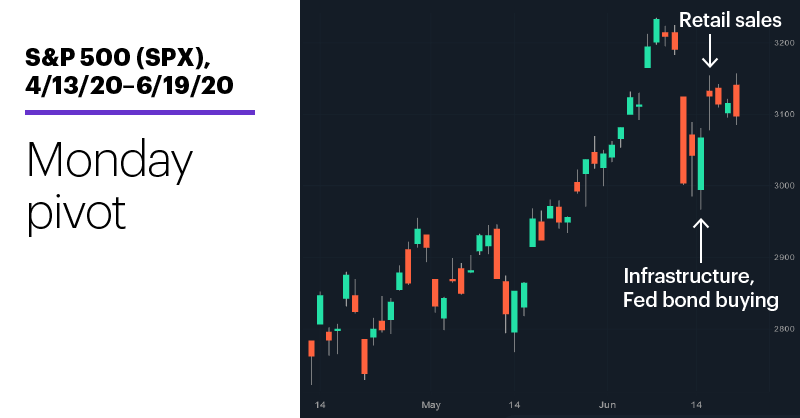 The fine print: Last week’s good news was followed by a higher-than-expected new jobless claims number, more sober commentary about the economic outlook from Fed Chairman Jerome Powell, a jump in coronavirus cases in Texas, Florida, Arizona, and California, and an announcement from Apple (AAPL) on Friday that it would close some of its stores because of those spikes.1

The number: +17.7%, the increase in retail sales last month—more than twice the estimated number, and the biggest one-month gain in history.2

The quote: “We at the Fed need to keep our foot on the gas until we are really sure we are through this…and I think you may find that there’s more for you to do as well.” Fed Chairman Jerome Powell, addressing the U.S. House of Representatives Financial Services Committee last week.3

The scorecard: The Nasdaq 100 (NDX) wrapped up last week with consecutive closes above 10,000, and ran its year-to-date (YTD) gain back to nearly 15%: 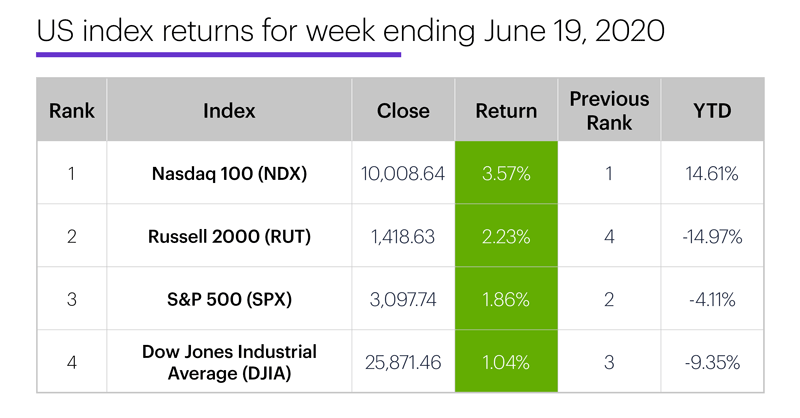 Futures action: August WTI crude oil (CLQ0) rebounded most of last week, tagging $40.60/barrel on Friday before reversing with the stock market and closing at $39.83. Despite enjoying one of its biggest up days in recent weeks on Friday (+1.4%), August gold (GCQ0) remained within its two-month trading range, closing Friday at $1,753/ounce.

Breakout watch: November soybeans (ZSX0) ended last week at 880.75/bushel—near the top of their tight, two-week trading range amid reports that China would step up its purchases of US agricultural products.4

Earnings this week include:

Last Thursday the US stock market slumped for much of the day, with many fingers pointing at the morning’s weaker-than-expected new jobless claims number, which came in around 1.5 million instead of the forecasted 1.2 million.

Here’s the rub: The number was actually lower than the previous week’s, and fit the multi-week pattern of fewer people filing for unemployment. While that may sound like a good thing, in the markets, sometimes “good” and “bad” are determined more by whether, and by how much, a number exceeds or misses expectations.

Those expectations are typically determined by polling various “experts”—economists and the like—who, believe it or not, are human beings with the same biases, blind spots and weaknesses that afflict the rest of the population. And if you watch the markets long enough, you’ll discover that after the experts are caught with their pants down—as they were with the May jobs report, when they expected a loss of eight million jobs and the economy instead added more than two million—they sometimes overcompensate in the opposite direction.

Which perhaps explains why last week’s jobless claims total was roundly described as “disappointing.” Analysts who were wrong about the most recent monthly employment report may have compensated by being overly optimistic about weekly jobless claims.

We’ll have to wait a few more weeks to see whether last Tuesday’s retail sales surprise triggers a similar response from analysts—a too-rosy forecast that disappoints the market, whether or not the number itself is good or bad.

1 CNN.com. Apple is closing some of the stores it reopened because of a spike in coronavirus cases. 6/19/20.

06/19/20
With earnings around the corner, food stock seeks to retain some of its lockdown-fueled demand.

06/17/20
Yesterday’s market action showed the potential for certain stocks to move if infrastructure spending moves from proposal to reality.