The sun is back—and not just that yellow thing in the sky.

We’re talking solar energy stocks. After an impressive 2019—some solar-energy ETFs and indexes more than doubled last year—the industry was off to a strong start this year before the coronavirus sell-off upended the market and cast doubt on the economy.

The solar business itself expected the worst, with internal estimates of 50% industry job loss.1 But with fears (so far) appearing to be worse than reality amid strong corporate demand and a quickly adapting residential business, solar stocks have thrived since March, with benchmarks at or near record levels and several individual names unleashing explosive rallies.

For example, news last week that residential solar installer Sunrun (RUN) was going to buy its biggest competitor, Vivint Solar (VSLR), propelled both stocks to record highs. As of yesterday, RUN had nearly quadrupled since mid-March: 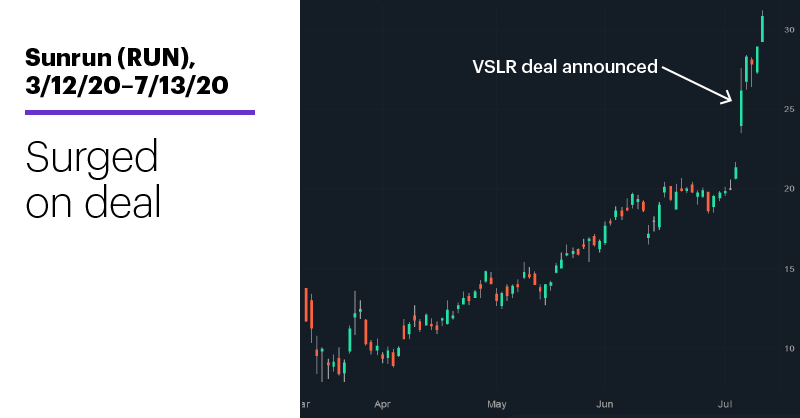 And VSLR? Up nearly fivefold.

The deal appeared to fuel bullishness across the entire industry, as traders piled into solar names last week and yesterday. One of the possible reasons for the optimism was the prospect of actual profitability in the residential solar business—something that had eluded both RUN and VSLR, but which some analysts saw as more achievable given the economies of scale stemming from their deal.2

But the fact that many tech and solar benchmarks have already pushed to all-time highs means a now-familiar question may be on the lips of many traders: Do these stocks still have room to run?

As always, it’s an unanswerable question—even if you sidestep little details like, “Over what time frame?” and “How much?” While the industry as a whole has been hot lately, and certain stocks have arguably gone supernova, some traders may choose to seek out opportunities in names that are still relatively in the shade.

For example, First Solar (FSLR)—one of the original solar giants—enjoyed a 2%-plus intraday rally of its own yesterday, marking the third day the stock has pressured the resistance level defined by its December–February highs: 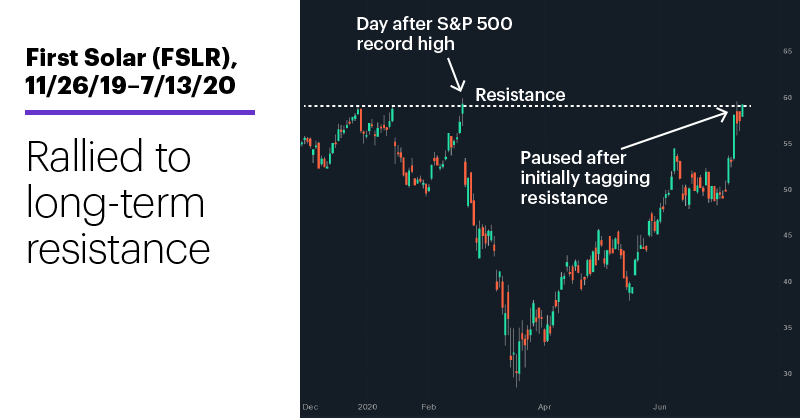 One of the ironies of FSLR’s story is that the company, which focuses on solar panel construction and large-scale solar project development, had, after a five-quarter string of earnings losses, returned to profitability in Q3 2019 and reclaimed its spot as the world’s biggest solar module manufacturer.3 The chart shows the stock, after a January pullback, was pushing to multi-month highs and testing its newly formed resistance level one day after the S&P 500 (SPX) hits its current all-time high. We all know what came next.

Chart traders often pay attention to stocks that consolidate near important support or resistance levels, the idea being that such price action represents the calm before the volatility storm—i.e., a pause before a potential breakout surge. That said, it’s called “resistance” for a reason—after all, FSLR has twice turned lower from this price level already (it also gave back most of its intraday gain yesterday), and solar stocks as a group are facing a potential cooldown in the wake of headline-grabbing news. Markets like nothing more than changing direction just when traders are most confident they won’t.

But savvy traders who expect further upside in FSLR may see that working to their advantage, since they could attempt to enter at a more favorable price if some of the recent hot money gets chased out of the market on a pullback.

Click here to log on to your account or learn more about E*TRADE's trading platforms, or follow the Company on Twitter, @ETRADE, for useful trading and investing insights. Disclosure: A non-diversified investment in a significant portion of assets in one sector, issuer, geographical area, or industry may involve greater risks, including greater potential for volatility, than more diversified portfolios. There are risks associated with certain industries or companies within an industry. This could cause performance to be susceptible to the economic, business, government regulation, or other developments that affect those industries.

2 Barron’s. Solar Stocks Are Jumping Because a Merger Could Bring Profitability. 7/7/20.

3 Greentechmedia.com. First Solar, Once Again the Biggest US Module Maker, Returns to Profit in Q3. 10/24/19.

Tech tops with earnings on tap

07/13/20
Surprise employment surge rounds out rebound week for US stocks.

07/10/20
Soaring “talent marketplace” stocks highlight another area of the economy that may be evolving because of the pandemic.

07/09/20
Will travelers avoiding the skies hit the highways instead—and will they take certain stocks along for the ride?