Whenever a market appears to do something out of the ordinary—i.e., goes up when it’s “supposed” to go down, or whatever the case may be—it’s a good idea to look into what the implications may be.

Sometimes it’s a red herring—a random event. Other times it can provide a heads-up about a potential price development.

Early last Friday, for example, the Russell 2000 (RUT) had pushed to its highest level in six weeks. The small-cap index was up 1.4% for the day—more than any other major US stock gauge—and looked poised to capture the week’s biggest return, too. But while the S&P 500 (SPX) and Nasdaq 100 (NDX) closed Friday near their intraday highs (and their highs for the week), the RUT gave back all of its early gain—plus a little more—to close down on the day: 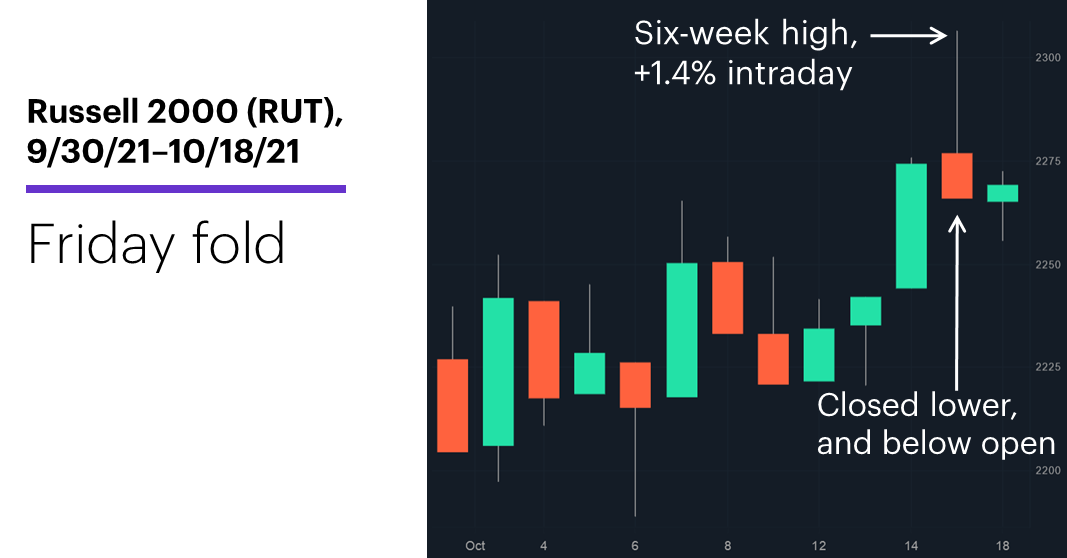 Source: Power E*TRADE (For illustrative purposes. Not a recommendation.)

Long-time traders know that while it’s unwise to attach too much significance to a single day, it can also be interesting to look into whether unusual developments like Friday’s RUT pattern have tended to signal a certain kind of follow-up move. To get an idea, we can boil down where the RUT was on Friday as follows:

1. The index was at its highest level in at least 20 trading days (roughly one month)

3. It closed in negative territory, and below its opening price.

Although this type of move hasn’t happened very often (only 26 times in the past 24 years), it has been followed by out-of-character price behavior. For example, since October 1998 the RUT has a positive return in 56% of all five-day (one-week) periods, with a median gain of 0.4%.1 In contrast, after days like Friday:

In other words, when the RUT reversed a big intraday gain to close in the red—on the same day it pushed to its highest level in at least a month—more often than not it was lower five days later. That’s a notable difference from its typical behavior.

The twist: 10 trading days (two weeks) after these patterns, the RUT was higher 62% of the time, and its median return was 1.6%. Both of those figures are better than the index’s long-term benchmarks, which suggests that when the Russell did pull back the first week, it sometimes bounced back with even more force the following week.

We’ll have an idea of which way this episode is playing out when the closing bell rings on Friday. Either way, it’s the type of pattern that some traders like to keep in their hip pocket for future reference.

December WTI crude oil futures (CLZ1) started the week by hitting a new contract high of $83.18/barrel, but closed lower for just the third time this month, slipping below $82/barrel.

Yield watch: The 10-year T-note yield followed up on last Friday’s rebound by jumping back above 1.6% on Monday, although they ended the day a little below that threshold.

Earnings season starts with a bang

10/13/21
Another sell-off in growth stocks—temporary or not—has discounted some recently bullish biotech names.