If the market’s recent pullback—three straight down weeks as of last Friday, and four of the past five in the red—has tested trader nerves, Monday’s 1.2% S&P 500 (SPX) rally was likely a welcome sight, especially since it occurred after Friday’s test of the August 5 and 7 lows around 2,822–2,825: 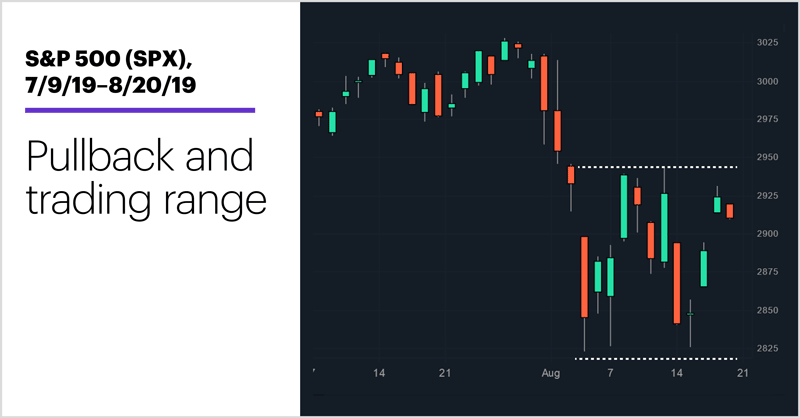 With potentially market-moving news on tap, there’s a chance traders may see a breakout of that range in the near future, one that may determine whether this week ends up in the plus column or minus column.

The thing is, a fourth down week may not matter as much as many people think.

Here’s where the good-news, good news scenario comes into play. While a fourth consecutive down week wouldn’t bring many smiles to the Street, there’s evidence that the market tends to rally more strongly the week after four straight down weeks than it does after three weeks followed by an up week:

Median SPX return one week after three consecutive down weeks followed by an up week: +0.2%, up 54% of the time.

In other words, if the SPX ends this week in the red, it could simply imply more long-side potential next week. That may be small comfort to those who had banked on additional upside this week, but the bright side is that an additional down week, rather than suggesting the wheels are coming off the market, is historically more likely to point toward a stronger-than-average short-term rebound.

Because the returns cited here are medians (i.e., they’re representative of dozens of individual examples, some up, some down), it’s important to remember that every situation is unique—something likely on the minds of many traders with the always nerve-wracking month of September around the corner.

But that doesn’t change the fact that what could seem like “bad” news this Friday could turn out to be good news a week later.

It’s in the Hole! Today’s FOMC minutes release will certainly have the market’s full attention, but some market watchers are likely looking to Fed Chairman Jerome Powell’s comments at the Jackson Hole financial confab on Friday to provide the real meat regarding the Fed’s stance on interest rates.

08/20/19
Oil stocks bucked the crude bounce. Was yesterday’s rally a sign the sector is getting in sync with its commodity?