Watch out for those hairpin turns.

Yesterday online car marketplace Vroom (VRM) tumbled 23% intraday in the wake of its first earnings release, which topped estimates but apparently caught the Street off guard with a Q3 revenue outlook that was around 16–22% below the $344.6 million analysts had been hoping for.1 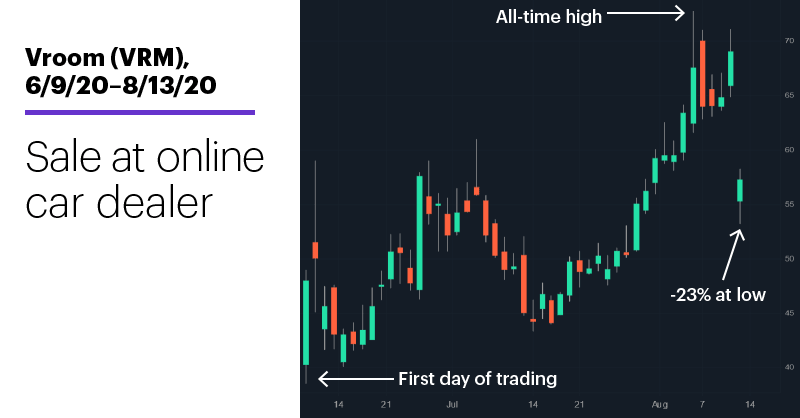 Given VRM, which specializes in used cars, had more than tripled its initial offering price of $22 in a little more than two months (the stock began trading on June 9) and had rallied more than 56% in the month leading up to yesterday’s earning release, it may have been ripe for correction on any perceived “bad” news.

If this all has a familiar feel to it, the phenomenon of big rallies in stocks thought to have an edge in the pandemic era—i.e., anything that offers a virtual, stay-at-home alternative to a traditional face-to-face experience, like buying a car—has played out more than once in recent months, in everything from workplace communications to health care.

Outperformance can sometimes fuel outsized expectations (among analysts, as well as investors and traders), which can make prices susceptible to retracement even if those expectations may have been unrealistic. After all, VRM—like fellow online car seller Carvana (CVNA)—currently operates at a loss, and isn’t expected to turn a profit until 2022.2

As sharp as yesterday’s sell-off in VRM shares was, it was nothing compared to the implosion in call options. The September $70 calls—which were at-the-money a day earlier—were down more than 70% by around 11 a.m. ET: 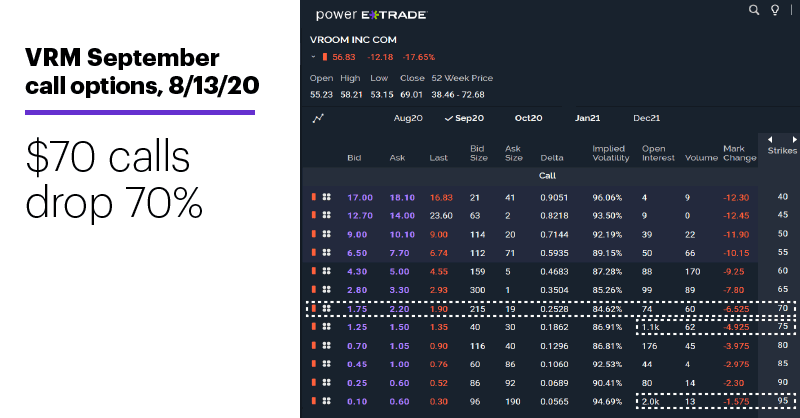 If the stock’s intraday rebound was a possible signal that some traders were having second thoughts about the depth of the sell-off (VRM further trimmed its loss to -15% by 2 p.m. ET), the fact that the September $75 and $95 calls still had open interest of 1,100 and 2,000 contracts, respectively, suggested that some traders may have been sticking with their long positions.

It doesn’t mean the stock can’t drop more, but it does highlight potential opportunities for VRM bulls (especially options traders) who have been waiting for deals. As noted in “IPO mini-boom makes noise,” which discussed VRM’s launch, “if a stock’s potential has more to it than excitement surrounding its IPO, it will offer more than one opportunity to participate.”

Flash sale in Peloton? Speaking of deals, yesterday’s news that Apple (AAPL) was launching a virtual fitness product suite appeared to present traders with an unexpected discount on shares of interactive fitness equipment maker Peloton (PTON)3—but you had to act fast (and you had to be up early).

The following 30-minute chart shows PTON dropped a little more than 5% in premarket trading after the story broke, but before an hour had passed in the regular session, the stock had jumped more than 8% and was well into positive territory for the day: 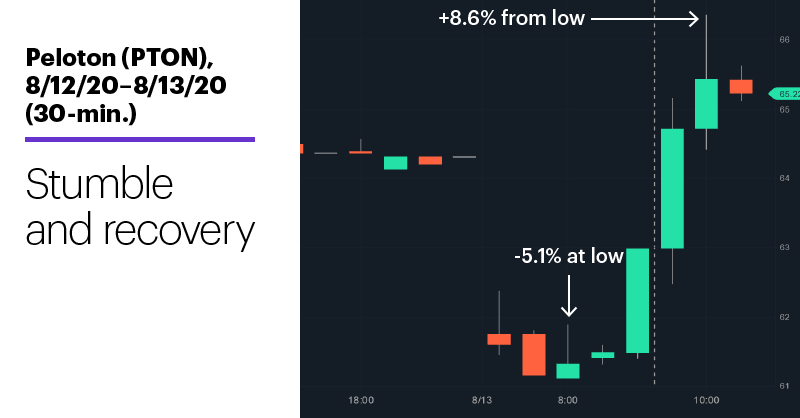 Market Mover Update: Ontrak (OTRK) got back on track with an 8%-plus intraday rally yesterday (see “Telehealth market’s temp rises”).

08/13/20
AI-powered telehealth provider’s recent volatility may be just what the doctor ordered for short-term traders.

08/12/20
After a historic run, the yellow metal has posted its biggest pullback in months. What could traders being seeing in the price chart?

08/11/20
Big options trade crosses the tape as stock busts out of trading range.