It’s hardly impossible, but the SPX will have to rally around 4% the remainder of this week to avoid a negative August.

Not that most people would likely care all that much—August has historically tended to be a mixed bag for the equity market—except that we all know which month comes next.

Get ready for September, the only month of the year with a negative average (-0.6%) return over the past six decades.

September has tended to be a down month more often after an exceptionally strong or weak August.

Spoiler alert: It may not be the cause for concern (especially for traders) that some seasonal headlines would have you believe.

Yes, the market has been volatile lately, and the US-China trade situation may have reached a new level of uncertainty last week. But even in the event September lives up to its reputation for bearishness, there are reasons bulls may be inclined to remain upbeat. Take a look at the S&P 500’s (SPX) September returns since 1960: 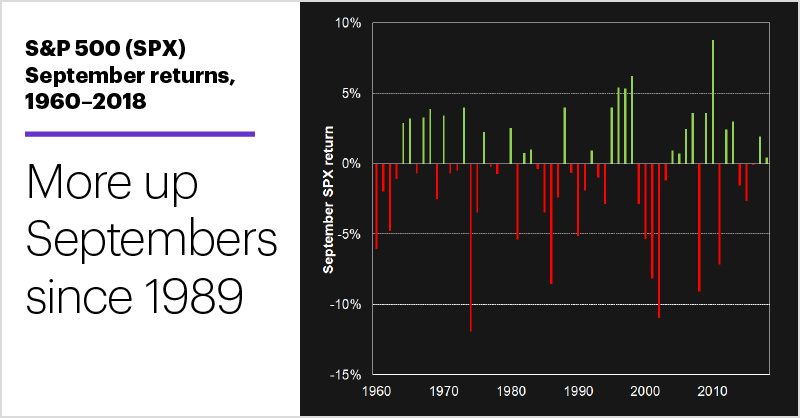 First, it’s not like the month is an automatic downer. Since 1960, the SPX has lost ground in September only six more times than it’s closed up: 32 losers, 26 winners, and one scratch (in 1979). But yes, that adds up to the worst winning percentage (44%) of any month of the year.

Things have changed in more recent history, though. Since 1989, September has been up as often as it’s been down, although a handful of big hits have skewed its average return to the downside. In fact, if you take away just the two worst offenders, 2002 (-11%) and 2008 (-9%), September’s average return flips to the plus column (+0.32%).1

In terms of how things pan out this month, consider this: Since 1960, the 35 positive Augusts have been followed by:

●September after 10 weakest Augusts: seven down, three up; -2.1% average return

●September after 10 strongest Augusts: seven down, two up, one flat; -1.6% average return

As of yesterday, the SPX was down around -3.6% this month, which puts it in the sweet spot between the two extremes.

Finally, long-time market players know late-summer/early fall market sell-offs have, more often than not, turned out to be longer-term buying opportunities. This year, if the most bearish scenario unfolds and we get a down August followed by a down September, the chart below shows how the last three months of the year have historically played out. 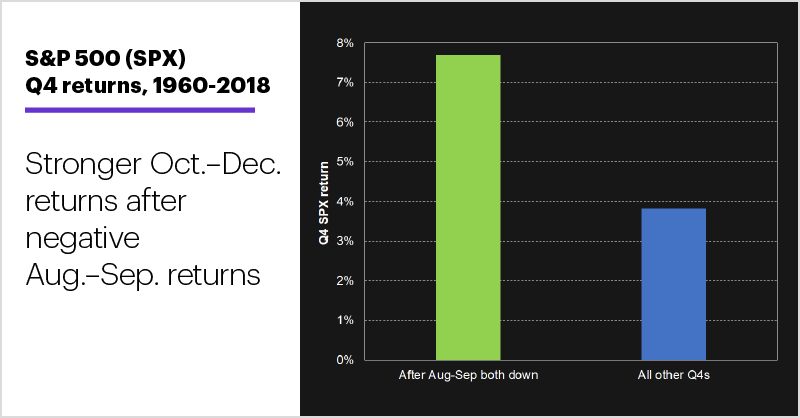 Of the 12 years since 1960 that followed a down August with a down September, only one (1977) had a losing Q4, and the average return in these years was almost twice that of the average for all other Q4s. So, while there’s no reason to root for a lousy September, if we get one, traders may want to be on the watch for better-than-average opportunities in Q4.

Market Mover Update: Gold continued to be one of the biggest beneficiaries of this month’s market volatility, rallying yesterday to its highest level since April 2013—December gold futures (GCZ19) tagged $1,565/ounce before pulling back.