Veteran traders know that first impressions can be deceiving, especially during earnings season. 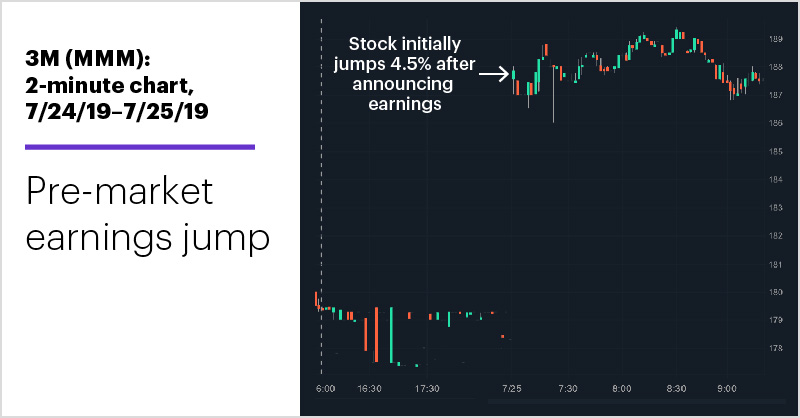 The stock inflated that gain to around 5.5% before the opening bell rang, and it even inched a little higher after that, tagging $187.72—its highest price since May 1—in the first minutes of the regular trading session.

But that was as good as it got. The initial glow of beating its headline numbers faded quickly, and the stock steadily gave back its gains throughout the morning. Not long after noon ET it stumbled into negative territory, creating this dramatic-looking bar on the daily chart: 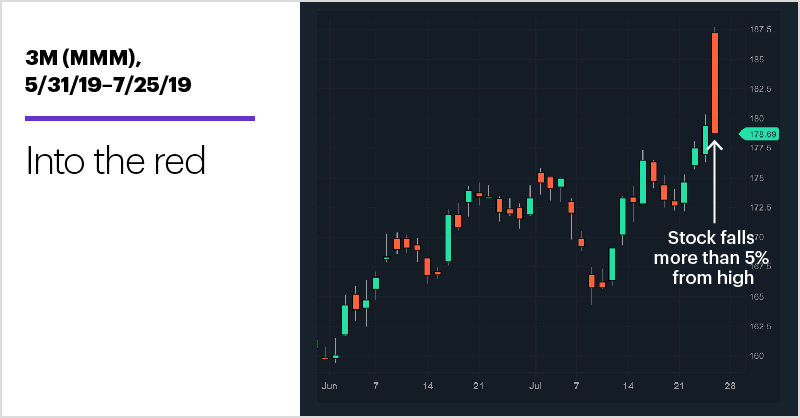 Volatility is par for the course around earnings releases, but the price action in MMM’s yesterday is instructive on a couple of levels. First, there’s a difference between beating your numbers and those numbers being objectively good. Granted, “objectively good” is itself a pretty slippery concept, but more than one observer yesterday morning pointed out that 3M (like many other companies) had gone to great lengths in recent months to lower its expectations regarding Q2 earnings.2

On that score, it succeeded, as the initial reaction to the report suggested. But that didn’t obscure analysts from highlighting that 3M’s sales declined, earnings contracted, and the company may need a lot of things to go right (including the US–China situation) to reach its growth targets for the year.3 In that light, yesterday’s intraday reversal appears to make more sense.

Second, the pattern of spiking to a notably higher high and reversing to close weakly (i.e., near the bottom of the day’s range, below the previous day’s close, or both) has a track record of foreshadowing short-term weakness in MMM.

If we review the highlight reel, both of these patterns—variations on the theme of an initially strong day reversing into weakness while the stock is not in a longer-term uptrend—have more often than not been followed by additional short-term selling: Since 1971, on average, MMM was trading lower five days after both patterns.4

3M is still, by most measures, a quality dividend stock5 that is well off its longer-term highs, so the question is hardly whether it’s ever going to rally again. It’s whether current sentiment and historical trade patterns are pointing to shorter-term opportunities for adept traders.

07/25/19
There’s more to the tech sector than the names that dominate financial news.

If the shoe fits