We’re not just on the cusp of a new year, we’re about to kick off a new decade. And taking a look at how sector rotation played out in the S&P 500 over the past decade may offer some food for thought about where momentum could be headed in the New Year.

The following table shows the rankings of the 11 S&P sectors for each year from 2010-2019. The bottom row shows each sector’s median rank for the entire decade: 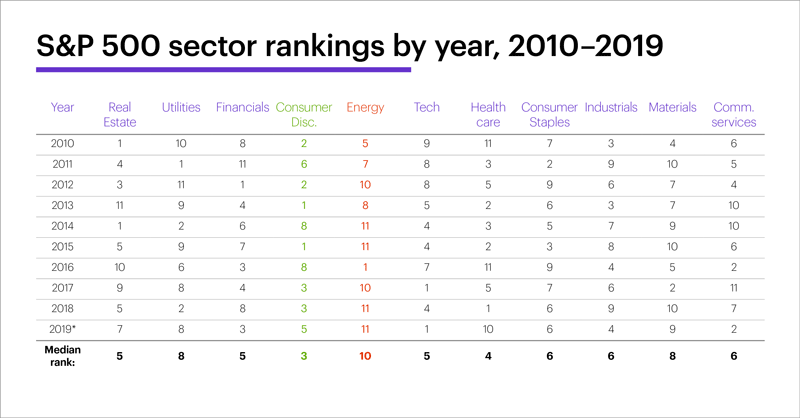 1. No sector ever claimed the top spot two years in a row. On average, the top sector  dropped six spots in the rankings the next year.

2. Overall, consumer discretionary—not tech—had the highest median rank (3) for the decade. It grabbed the No. 1 spot two times, and was never one of three-weakest sectors.

3. Energy was the clear laggard, showing up as the weakest (or second-weakest) sector six times in the past 10 years.

So, regarding that last point, if the pattern holds it would suggest that at least one of this year’s top-three (tech, communication services, and financials, as of December 20)—could be one of 2020’s bottom three.

Finally, here’s an ultra-contrarian alert: While it would be foolhardy to put too much faith in a single data point, some traders may take note that the last time the energy sector was the S&P’s worst performer in back-to-back years (2014-2015), it jumped to front of the line the next year.

12/26/19
What do outsized annual returns like this year’s signal for the following year?