As was the case throughout the US-China trade war, the stock market has recently been subjected to repeated whiplash from the coronavirus, selling off sharply on days (like yesterday) with negative headlines, rebounding the next day if the news is more positive, and taking another dive the day after that if bad news again grabs the reins.

With the S&P 500 (SPX) yesterday taking its biggest one-day hit since February 2018 and stocks now in their deepest pullback since last August, it’s a good time to look at the potential support levels traders may be eyeing as they attempt to forecast the market’s next steps.

First up, the market’s premier “fear” gauge, the Cboe Volatility Index (VIX), which reflects the implied volatility of SPX options and tends to spike during steep stock sell-offs and panics. The following chart shows yesterday the VIX topped the levels it hit last August when the trade war was getting particularly nasty: 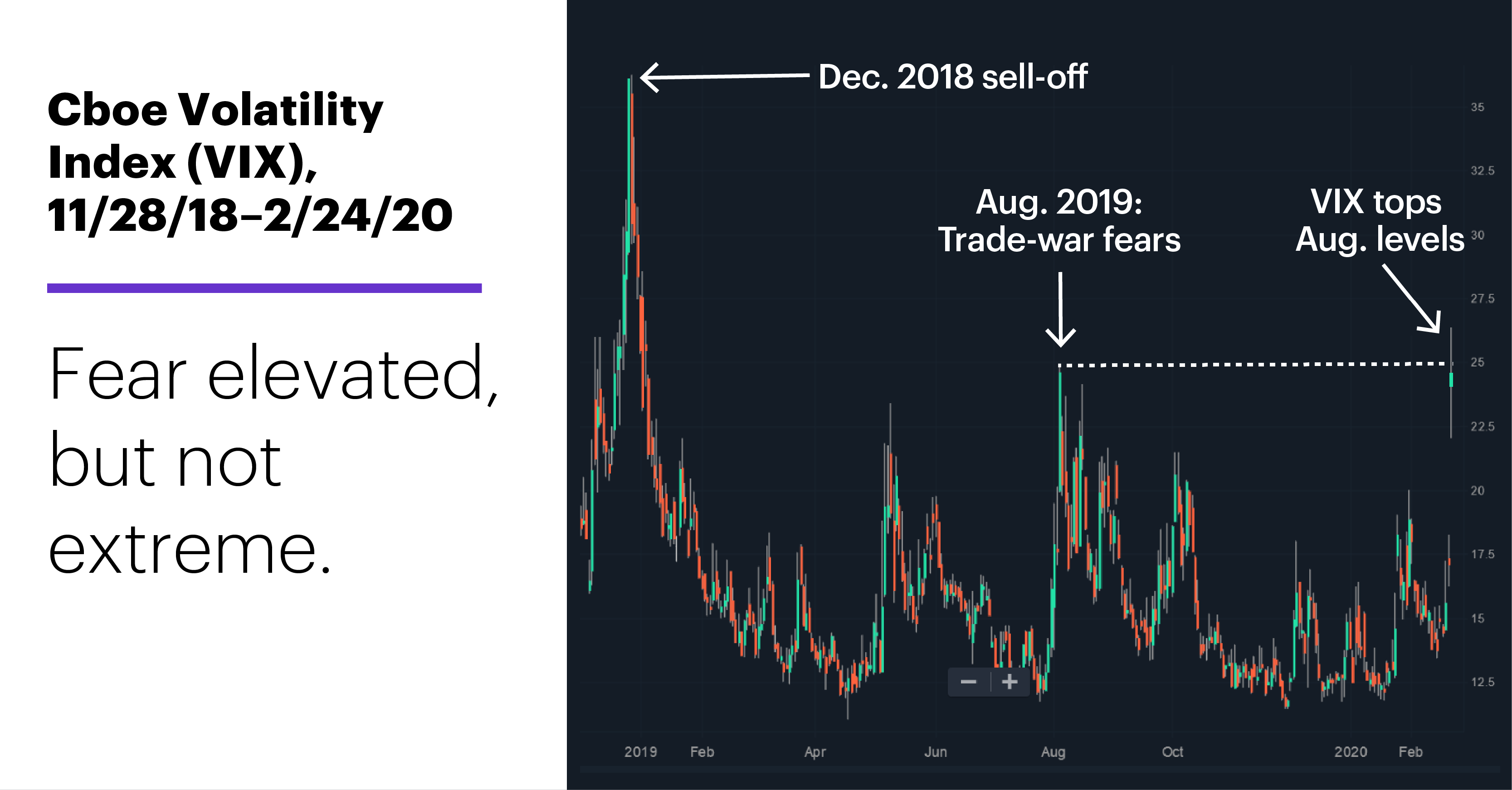 But that high (above 26) was still a far cry from its levels during the December 2018 market slide (above 36), and even farther from its February 2018 peak above 50. In other words, investor fear appeared to be roughly comparable to what it was during the August downturn, but (as yet) nowhere near 2018 levels.

No one can predict where or when the current decline will end, but unlike long-term investors—who are generally better off ignoring the topic altogether—shorter-term traders will be thinking about possible downside targets, either to take profits on shorts or to plan long-side strategies. The following chart shows yesterday’s sell-off dropped the SPX almost precisely to the support level defined by its December and January lows: 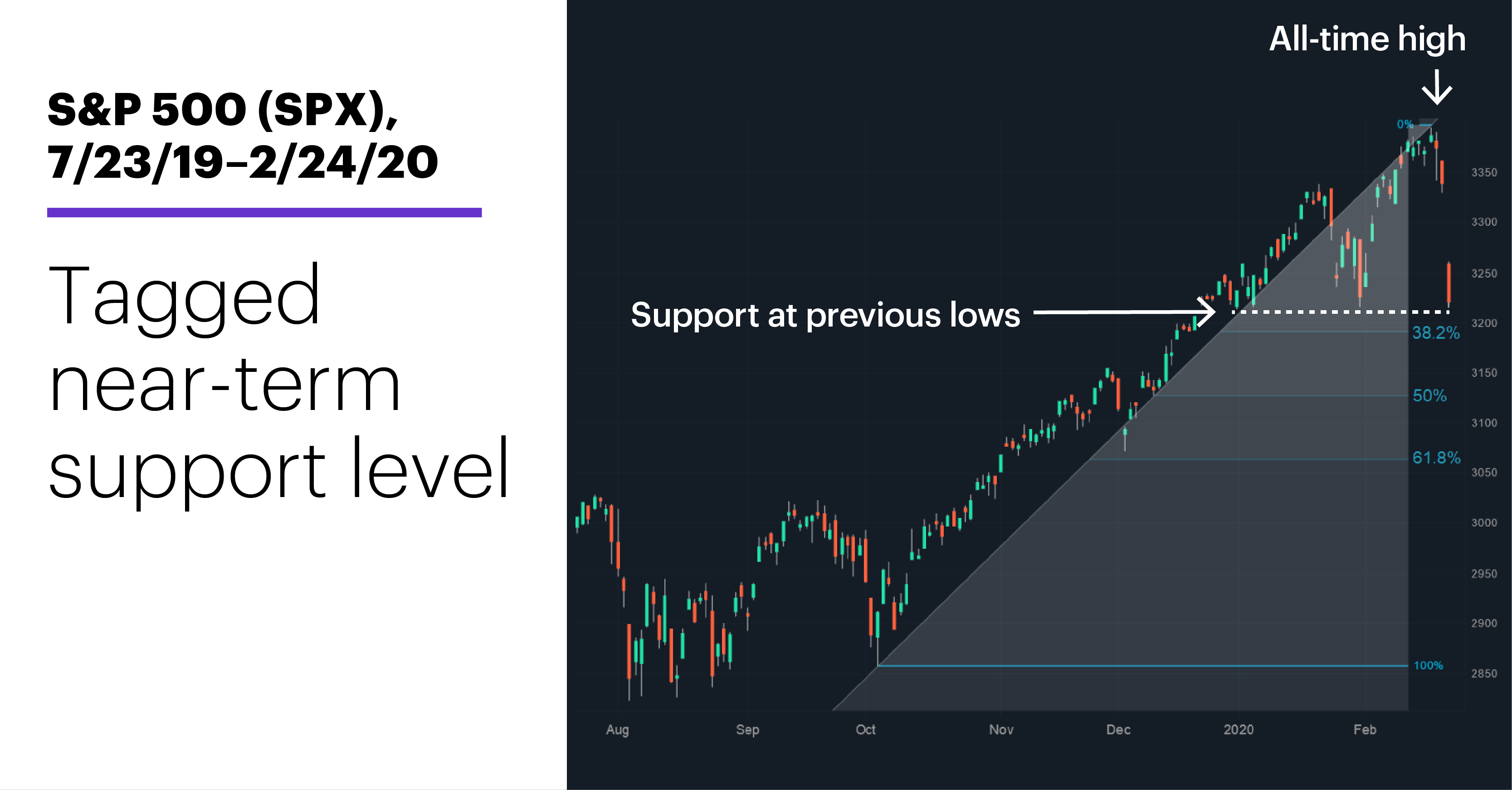 Although there’s no reason the SPX couldn’t rally immediately off this level (it actually bounced fairly energetically yesterday afternoon), Monday’s Active Trader commentary noted that, in analyzing the Nasdaq 100’s (NDX) pullback, the odds for a sustained (i.e., not just a day or two) rebound were historically lower if the NDX closed lower yesterday, which it did (see “Weighing risks, eyeing rewards”).

Technicians are likely aware that the first significant Fibonacci retracement level of the October–February rally is just a little below this support level. The three levels in the shaded area of the chart are based on ratios of numbers in the “Fibonacci series,” a sequence in which each successive number is the sum of the two that precede it—i.e., 1, 2, 3, 5, 8, 13, 21, 34, 55…etc. (Aspects of the Fibonacci series appear in a range of natural phenomena, such as the growth pattern of flower petals and tree branches, and the patterns of certain seashells.) Bottom line, 38.2%, 50%, and 61.8% are the most popular “Fibonacci ratios” for calculating price retracements:

Traders who can identify potential market inflection points in advance have a better chance of being able to put the fluctuations in market sentiment in context, and take action when appropriate.

Market Mover Update: One of the biggest bullish beneficiaries of yesterday’s stock market’s woes was—you guessed it—gold, which jumped more than 2% intraday. But the rally nearly evaporated by the end of the day: April gold futures (GCH0) tagged $1,691.70 in early trading before retreating below $1,660 later in the day.

02/24/20
The final week of a strong February opens with US stocks pulling back from their most recent records.