The crude oil market isn’t exactly known for sitting on its hands, but that’s exactly what the world’s most heavily traded commodity has been doing for the past five weeks.

Since oil fell to a multi-decade low in mid-April, September WTI crude oil futures (CLU0) have rallied more than 70%—but that’s where, as of yesterday, the story ended, as prices have continued to bump their head on resistance around the $41/barrel area: 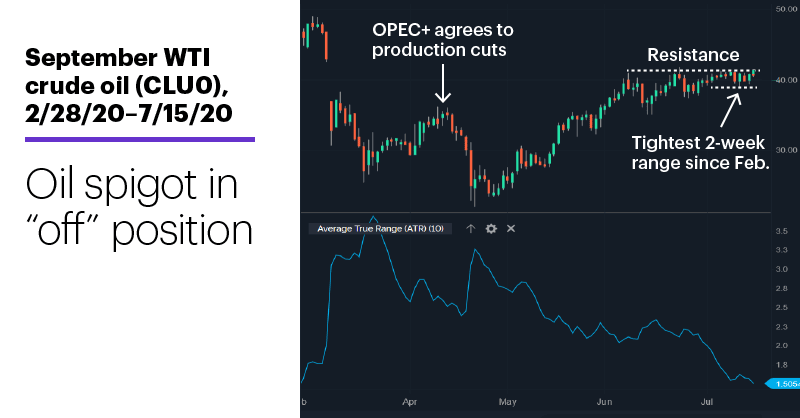 Also, the market’s famous volatility has gone AWOL in the past couple of weeks, as prices have settled into an increasingly narrow range—as shown by the 10-day average true range (a measure of price changes that accounts for gaps between price bars), which is at its lowest level since February.

In fact, as of yesterday, crude oil’s two-week range was the narrowest it’s been since mid-February—which was right around the time the market fell out of bed, along with stocks.

And there’s reason to believe some traders are looking for the market to shake off its current doldrums sooner rather than later.

It’s no coincidence that oil took off to the upside not too long after Saudi Arabia and Russia abandoned their destructive price war and OPEC and its allies agreed to their biggest-ever output reduction—9.7 million barrels per day (bpd). Even then, though, some analysts doubted whether it would be enough to offset the coronavirus-driven demand implosion.1 (Notice prices slid for another week or so after the April 13 announcement.)

Here we are, three months later, and it’s again decision time for OPEC & Co., who are meeting this week to, among other things, hammer out future production levels.

By all accounts, there aren’t going to be any easy decisions, because despite the April-June rally, oil prices are still relatively low, making life economically difficult for OPEC members. The conundrum:

●Increasing production could mean more money flowing into their coffers (as long as it doesn’t drive down prices too much).

●Cutting production (or extending current reductions) could boost prices, but it could also ramp up US shale oil production—which, longer-term, could keep a lid on further price gains.

In other words, if OPEC increases production, it could trigger a market downturn. But if it takes steps to boost prices, it could be making life easier for its primary competitor, the US.

Looming in the background of all this drama is an expected decline in oil demand next year—estimated at 97.7 million bpd, which is notably less than what was already perceived to be a tepid late-2019 level of 99.8 million bpd.2

All of which may help explain why, despite crude’s rebound, the energy sector is still—by far—the weakest sector of the US stock market, down around 39% on the year.

But in terms of the oil market itself, while some may think that maintaining the status quo would probably result in more sideways price action, if history is any guide, crude prices are unlikely to remain as tightly rangebound as they have been for the past two weeks.

Start your engines. (And make sure you’ve checked your oil level.)

2 CNBC.com. OPEC faces ‘worst of both worlds’ with oil prices in limbo ahead of committee meeting. 7/15/20.

Trading outside the box

07/15/20
FDX shares packaged themselves into a tight consolidation after a big earnings rally. Will breakout traders be leaning to the upside or the downside?

07/14/20
More upside in solar stocks? Traders may want to look at names that are still in the shade.

Tech tops with earnings on tap

07/13/20
Surprise employment surge rounds out rebound week for US stocks.