If you're drawing a blank, you don't live in China. November 11 (11/11) is the day originally tagged in 2009 by Chinese digital retailer Alibaba (BABA) to be something of an antidote to Valentine’s Day—i.e., if you’re single, hop online and buy yourself something nice. It’s since morphed into the biggest shopping day on the planet—yes, bigger than Black Friday, Cyber Monday, or Prime Day. Last year it accounted for 1.9 billion orders in 24 hours.1

If you think that level of commerce would be at least a minor reason for BABA shares to have a little extra strut in their step around this time of year, you’d be wrong. There have been only a half dozen Singles Days since BABA started trading publicly in the US in 2014, but the runup to the event has generally been disappointing for the stock.2

This year has been no exception. BABA dropped 9% intraday yesterday, extending its loss from October 27’s record close of $317.14 to 17%: 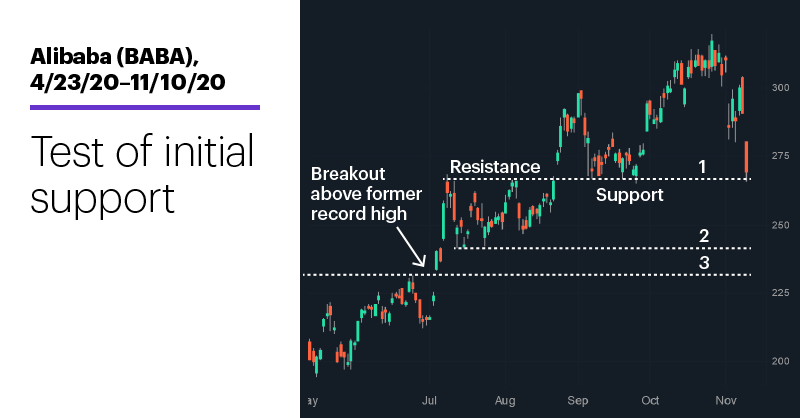 The first week after Singles Day has been no great shakes, either—the stock has rallied three times, fallen three times, and has a negative average return. But the next five trading days have been a different story: BABA gained ground five out of six times with an average return of 2.5%.3

True, it’s only a handful of examples, but if a similar pattern (weakness immediately before and after Singles Day, followed by a bounce) played out this year, the price chart highlights three levels shorter-term BABA bulls may be watching:

1. The former-resistance-level-turned-support the stock reached yesterday, which is also just a little above the 38.2% retracement level of the March–October rally (roughly $262.50). BABA bounced far enough off its intraday low to climb back above this level, although yesterday’s follow-through selling in Zoom Communications (ZM) shows that not every intraday reversal means bulls are back in charge.

3. The late-June high around $231, which also represented a breakout above the former January record high. The 61.8% retracement level is just a little lower, around $227.50.

BABA’s recent drop has, of course, made call options much cheaper and put options more expensive, but the fact that implied volatility (IV) is relatively high (above its 30-day average) means all options prices may be on the rich side—and that means some bulls may be more interested in selling puts than buying calls, either with the intention of getting assigned the stock or collecting premium. 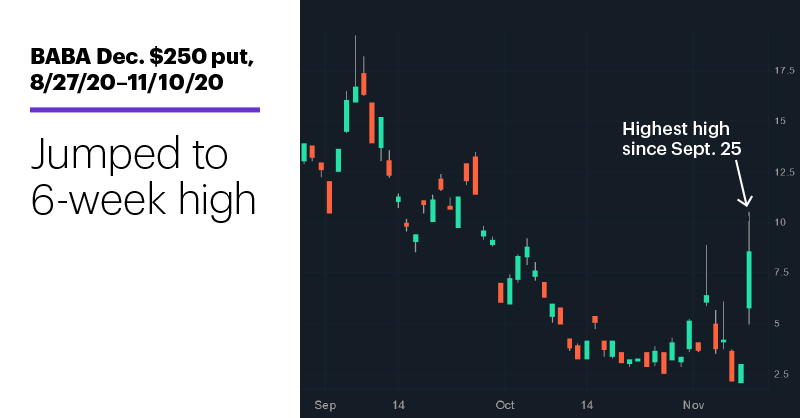 The chart above shows that even after pulling back from its intraday high, the December $250 put—which had touched a six-week high—was up more than 175% yesterday morning. If and when BABA turns back to the upside, those fat premiums will likely shrink significantly.

11/10/20
Pandemic-era winners aren’t immune to sell-offs, but was Monday’s disruption a warning to bulls—or an opportunity?