For 11 weeks, though, household products colossus Colgate Palmolive (CL) has dashed the hopes of bulls looking for it to extend the roughly 27% gain it notched from late-December to late-July. Although it’s still up roughly 15% on the year, on Wednesday the stock fell to its lowest point since early April, breaking below its August and September lows: 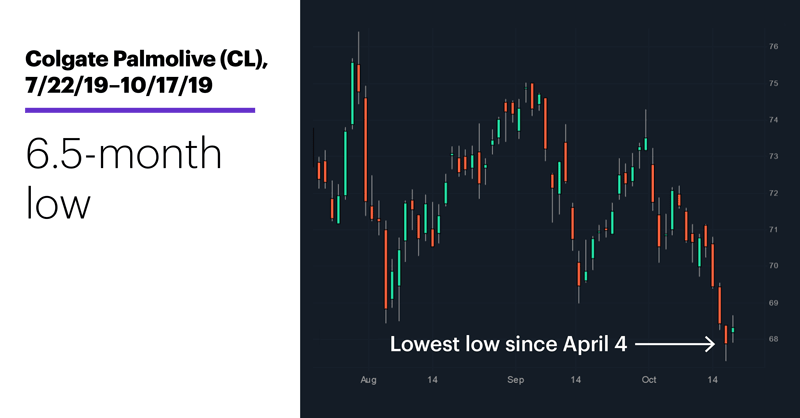 Shares stabilized yesterday, but with the stock still off around 10% from its late-July highs, some traders may be wondering if CL’s slide below the $68–$69 level—which was the launching pad for a 9% rally in August and a 6% rebound last month—portends more selling.

As is often the case, getting a longer-term perspective adds some useful context. The chart below shows those two bounces occurred around the 38.2% retracement level of the stock’s December–July rally: 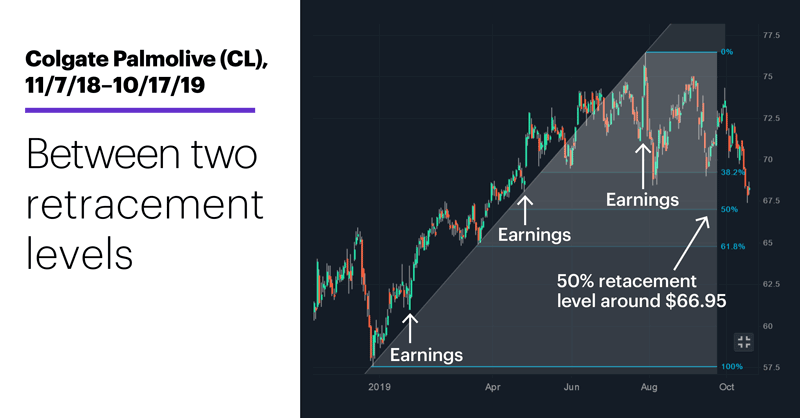 Along with 50% and 61.8%, 38.2% is one of the most widely watched “Fibonacci” retracements (derived from numbers in the Fibonacci number series)—levels at which some traders expect prices to reverse, bounce, or even just pause.

Sometimes they do, sometimes they don’t. In this case, CL staged a couple of nice rallies off the 38.2% level, and Wednesday’s decline dropped the stock close—but not quite—to the 50% retracement level, which is a shade below $67. Some traders may think Wednesday’s low ($67.37) was close enough to entertain the idea that yesterday’s rally was the beginning of a new up move, others (perhaps looking at how much the August and September lows penetrated the 38.2% retracement level) may be waiting for a more decisive tagging of the 50% level.

As luck would have it, there are a couple of events on the trading calendar that may drive some additional volatility in CL shares in the coming weeks. First, the stock goes ex-dividend next Tuesday (October 22), which means there’s a chance the stock could experience some downward pressure as the share price is adjusted downward to compensate for the dividend payment.

Then there’s earnings, currently slated for Friday, November 1. The longer-term chart above shows CL’s other earnings announcements this year (all three met or slightly bested estimates), which were preceded by dips and followed by strong short-term rallies. 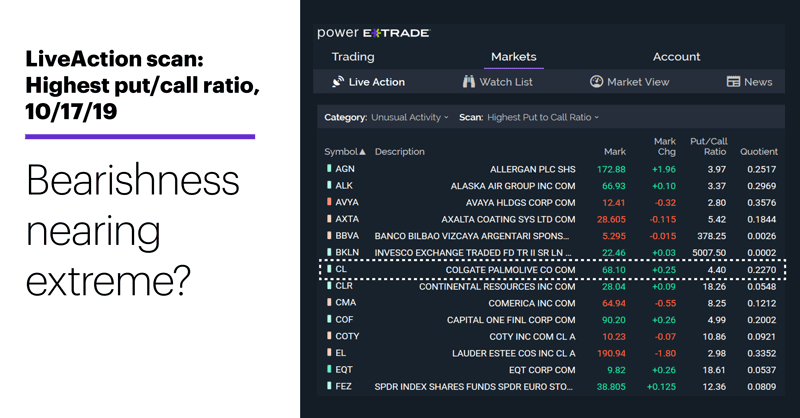 One other piece of interesting information crossed the ticker yesterday: CL had relatively high put volume, as well as a high put/call ratio, as shown in the LiveAction scan above. It’s perhaps unsurprising that put options volume ramped up as the stock slid to fresh lows, but some traders may see this development—in the context of a stock that has already undergone a notable markdown in recent months—as a signal that bearish sentiment may be peaking.

10/17/19
Construction materials? High–flying? Yes, more than you may realize.

10/16/19
Chip-related names were on the upswing yesterday amid the recent progress in trade talks.

Stocking up on staples

10/15/19
Some big options traders appeared to take an interest in a key consumer stock the week before it releases earnings.