Market whiplash hasn’t been limited to crude oil traders the past couple of days, although they should probably get first crack at the ER.

The weekend attack on Saudi Arabian oil operations drove up October WTI crude oil futures (CLV9) 13% on Monday, but reports yesterday that the Desert Kingdom would be able to ramp up production much faster than originally expected were followed by a 5%-plus drop in the black gold.1

And while the US stock market’s overall response to events was modest—the S&P 500 (SPX) fell a modest 0.3% Monday and traded marginally higher most of yesterday—certain sectors rocked and rolled: energy stocks, of course, but also airlines, which were staring down the specter of dramatically higher fuel prices in the aftermath of the oil surge. 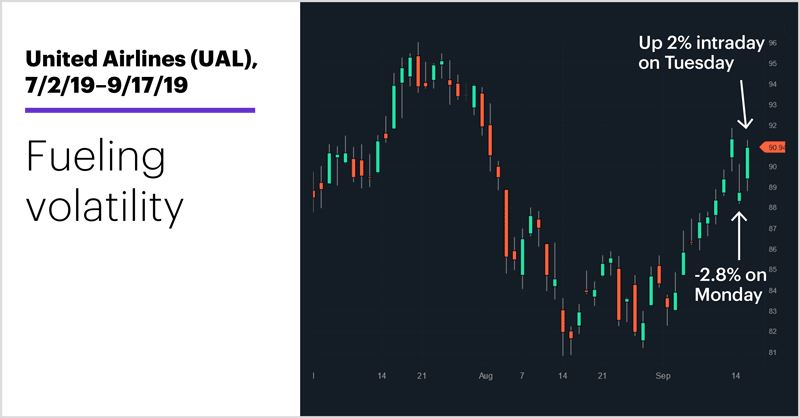 On Monday United Airlines (UAL) fell nearly 3% (chart above) and American Airlines (AAL) tumbled more than 7%. But both rebounded yesterday, with UAL up more than 2% in early trading.

The immediate reactions in both the oil and airline markets undoubtedly had an emotional component. In addition to the immediate oil supply disruption, there was also the uncertainty surrounding retaliation for the attack, which could potentially escalate regional tensions, and oil prices, to an even greater degree.

Tuesday’s “good news” had the opposite effect, and resulted in some market watchers renewing bullish calls for airlines, which had turned in a blah performance for 2018 (weighed down, some said, by rising oil prices much of the year) before gaining traction in early 2019.2

But a quick survey reveals that airline stocks are a diverse breed. Some have posted modest gains this year, others have been in downtrends, and others have been mired in choppy trading ranges. If the net outcome of the oil story is that crude retreats and then returns to what it was doing before the Saudi attack—moving more or less sideways—then traders looking for short-term rebounds in airlines are likely to see that scenario play out differently from stock to stock. In other words, don’t expect an airline that was trending lower before Monday to suddenly embark on an uptrend.

That could make certain tickers, like UAL, potentially more interesting than others, since it has not only rallied more than 8% since September 3, but also pushed into the upper half of its broad consolidation that is now almost a year old.

Delta (DAL) has distinguished itself this year by maintaining the uptrend that started in early January: 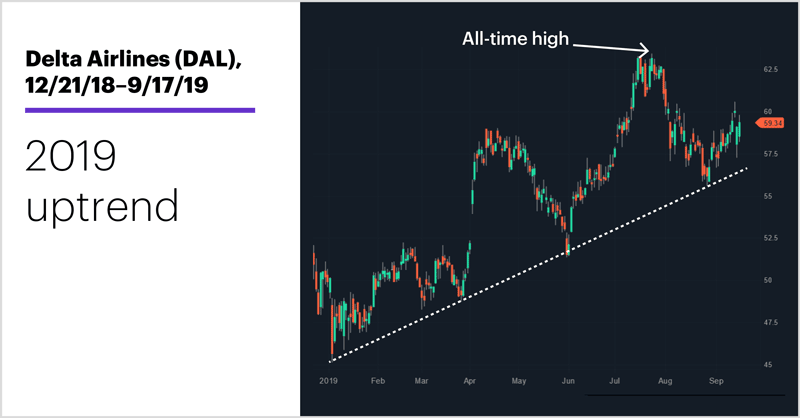 DAL is up more than 18% on the year, and is roughly 7% away from the all-time high it hit in late July. Yes, the ride has been bumpy, but Monday’s pullback didn’t even drop prices to the trendline that the stock most recently tested in late-August.

A continued retreat in oil prices could potentially fuel additional near-term upside in airlines, but as has been the case in the past, different airline stocks will likely fly at different altitudes. Savvy traders looking to take advantage of such a boost will likely be focusing on the ones that were previously showing the best angles of ascent.

Market Mover Update: Etsy (ETSY) continued to roll yesterday, extending its gain over the past six days to more than 16% (see “Online marketplace gets a bid”).

09/17/19
Strike interrupts GM upswing, but bulls could be back on the job sooner than some people think.

09/13/19
Things are getting real in the showdown between Apple, Netflix, and Disney, but the story is far from over.