A bank stock reverses a recent bounce after touching a notable resistance level, selling off more than 1% intraday amid heavy put options volume.

That was the scenario Thursday in Northern Trust (TRUST), which initially traded higher on the day, but soon slipped into the red as a LiveAction scan showed volume in put options was around 243 times the volume in calls: 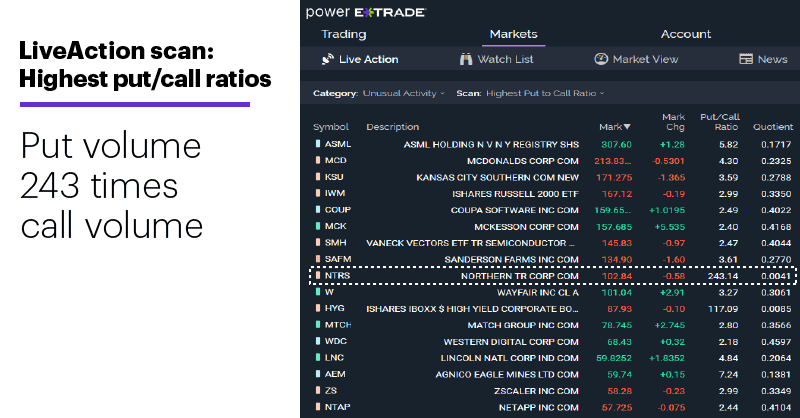 Although there’s two sides to every trade, heavy put options trading suggests at least some traders—the ones doing the buying—are expecting the stock to drop.

Yesterday morning seemed to suggest that’s the direction things were heading, as traders began dumping shares after NTRS appeared to test resistance around $104.50—a former support level defined by the November, December, and January lows, which the stock broke below on January 22 after missing its earnings estimate:1 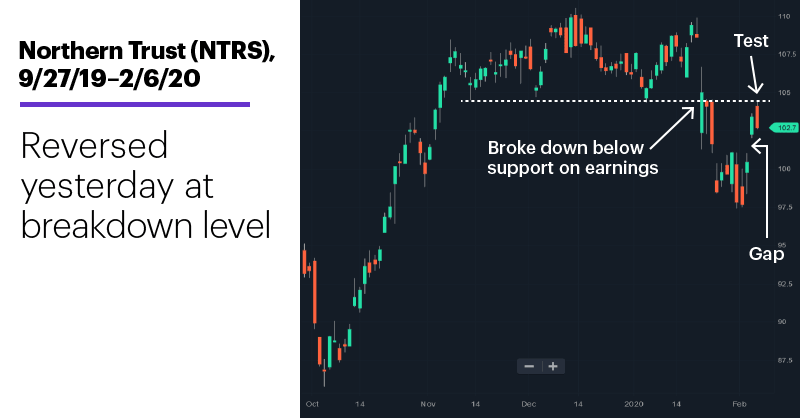 The stock traded lower over the next several days, falling to around $97.50 before turning up this week. While yesterday’s intraday reversal at resistance, coupled with the heavy put volume, may have encouraged bears to look for renewed downside momentum, they may have wanted to dig a little deeper into the options activity before jumping to any conclusions.

The vast majority of yesterday’s put volume was in the April $95 and $100 contracts, and the chart below shows that while a whopping 2,700 contracts changed hands in both strikes, open interest (OI) in each was less than 100: 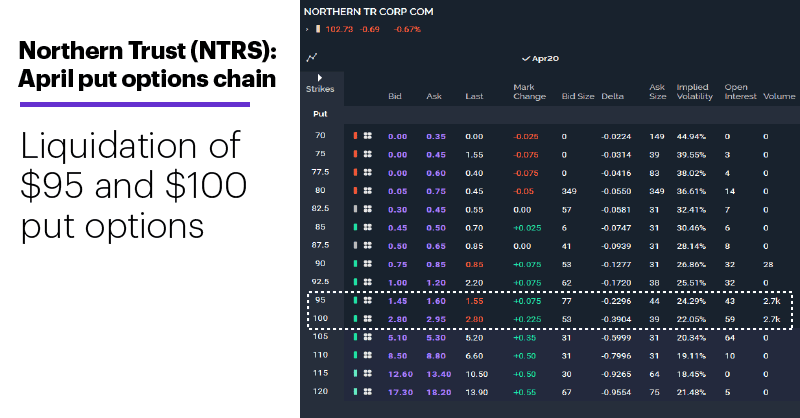 Since OI is the number of unclosed trades, this means almost all the action in these options consisted of traders getting out of existing positions instead of opening new ones (if that wasn’t the case, the OI in each option strike would be at least 2,700). In other words, the options activity was much less bearish than it initially appeared to be—and could possibly be interpreted as bullish)—intraday stock downturn notwithstanding.

This could cause some traders to view yesterday’s down move in a different light. Sure, dropping on a day the broad market is rallying is never encouraging for bulls—and some technical traders would likely argue that NTRS could further retreat into its recent price gap before attempting to renew its rebound—but they’re probably also less likely to see it as a larger sign of bearish sentiment.

In which case, NTRS bulls may be looking at the recent pullback as a head-fake in its own right.

Market Mover Update: Penn National Gaming (PENN) continued to roll yesterday, running up its gain over the past six days to more than 19% (see “The biggest game in town”). Biohaven (BHVN) continued to put pressure on the bears who sold its trading range breakdown last week, rallying another 1%-plus yesterday.

02/05/20
Stock’s quick rebound from downside breakout raises the prospect of a bear trap.

02/04/20
Will earnings sell-off bring food-service stock’s bulls back to the table?

02/03/20
February kicks off with stocks battling their first downturn of the year, courtesy of the coronavirus.