The Nasdaq 100’s (NDX) 3.5% Thursday rally marked a rather remarkable turnaround from two days earlier, when the tech index suffered its second-biggest one-day loss (-3.9%) since 2020 and fell to its lowest level in nearly a year: 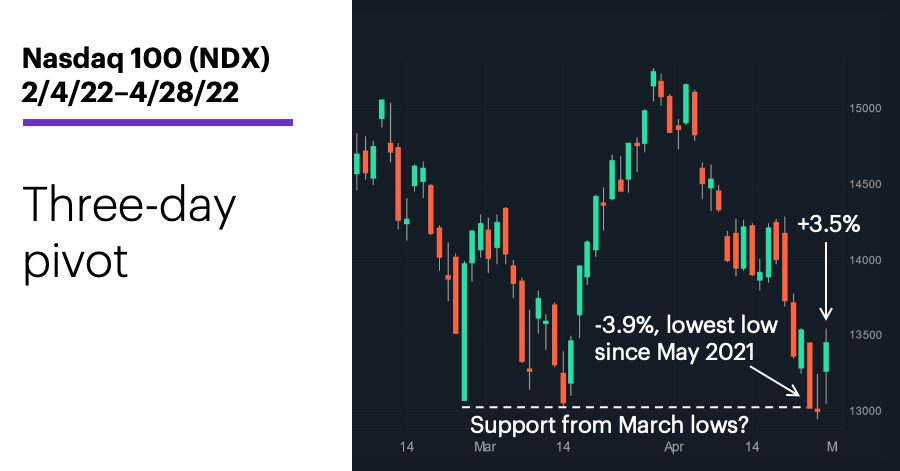 Many chart watchers likely noticed this pivot occurred at the support level implied by the index’s March lows—something that may have led more than a few of them to consider the possibility that another rebound could be in the making.

Since October 1985, the NDX has made similar moves (a 3%-or-larger rally two days after a 3%-or-larger loss, separated by a day making the lowest low in at least two weeks) 31 other times.1 And some of these were, in fact, followed by rallies. But not all, and not necessarily right away.

First, it’s no coincidence that the last time the NDX made a similar move was in March 2020. The most recent ones before that were in December 2018, August 2015, May 2010, November 2008, and October 2008. If those dates don’t ring any bells, one look at a price chart will confirm these were among the market’s most volatile episodes of the past several years.

And that volatility was evident in the NDX’s price action immediately after these pivots:

Also, the performance didn’t vary much even if the pivot size was 2.5% instead of 3%, or the index fell to a one-week (or four-week) low instead of a two-week low.

In other words, rather than reacting emotionally to a price move, analyzing what the market has done in similar circumstances in the past can be a good way to provide perspective and insight into market dynamics.  We believe this is especially important in volatile market conditions.

04/28/22
In the market, have April showers been followed by May flowers?

04/25/22
Market stumbles into last week of April amid inflation and interest rate concerns.