While every December brings the latest ruminations on the “January indicator”—whether the stock market’s performance in January (and its gain or loss in the first few days of the month) signals its likely direction for the remainder of the year—you don’t hear much about July.

In other words, does the market’s performance in the early days of the second half appear to have any relation to how the remainder of the year pans out?

So let’s start from scratch.

“Stock market fireworks” noted that while July has traditionally been one of the weaker months of the year from a long-term perspective, it’s been more bullish lately—up eight of the past 10 years.

This July started in the bullish camp, with the S&P 500 (SPX) posting a 1.2% gain in the first five trading days of the month (through Monday), despite a minor pullback following the July 3 record high.

And although experienced traders don’t attach too much significance to a handful of days, over the past 20 years an SPX gain in the first five days of July has been followed by: 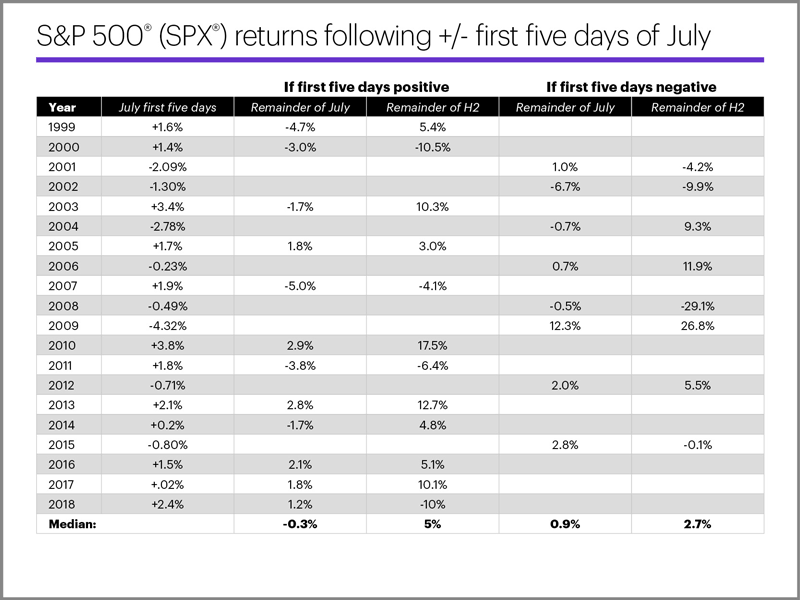 This table shows that the SPX has gained ground in the first five days of July in 12 of the past 20 years. When that happened, the remainder of July tended to be so-so: positive six times and negative six times, for a median return of -0.3%. But the remainder of the second half was a different story, with the SPX posting a net gain in eight of 12 years, with a median return of +5%.

Market Mover Update: In case you’ve been on a remote desert island the past 24 hours, the S&P 500 topped 3,000 for the first time in its history yesterday.