In what has been a good week overall for high-profile earnings releases—Apple (AAPL), Microsoft (MSFT), and Tesla (TSLA) all crushed their numbers, and saw their stock prices (initially) soar on the news—Facebook (FB) stood out.

Not in terms of the main numbers. Like its fellow A-Listers, FB topped its headline earnings and revenue estimates—and the company grew its userbase, too.

That’s where the similarities end. Below the headlines, there was this nugget: Soft net income, blamed on higher expenses (+51% vs. 2018), with much of that laid on the doorstep of a 26% increase in the employee headcount.

Cue yesterday’s sell-off, with FB shares opening down 7.5%, and falling as much as 8.3% intraday: 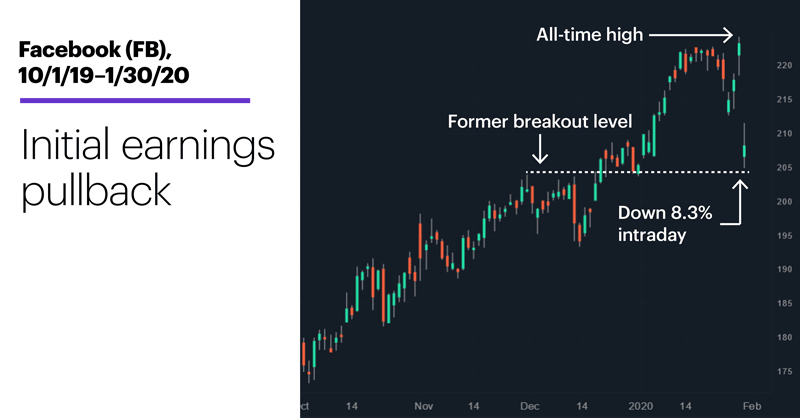 While yesterday’s move was likely a gut punch to traders who bought right before the numbers came out (FB hit a new record high of $224.20 on Wednesday), a few potentially bullish signs may have gotten lost in the fog:

1. Yesterday’s move dropped the stock very near to the breakout point noted in “Checking your FAANGs,” a potential support level FB has tested and rallied off once before (in late December).

3. By midday, the stock had rebounded off its lows and was trading above its opening price (even as the broad market was pushing its intraday lows). In other words, trader sentiment appeared to be less bearish as the day progressed.

Finally, there’s the story told by the following price pattern: a day that gaps down (i.e., has a high that’s below the previous day’s low) and trades down at least 5% intraday. Here’s what FB did after 17 other instances of this pattern since July 2012:

No stock trades in a vacuum, and FB shouldn’t be expected to be immune to elevated coronavirus fears that could impact the entire market. (By the way, more often than not, the stock traded lower the first day after the down–gap pattern before moving higher.) But given the factors surrounding yesterday’s move, some traders may be eying the potential for at least a short-term bounce in FB, especially if there’s support from the broad market.

The coronavirus hasn’t just roiled the stock market, it’s also kept bids under safe-havens like gold, the dollar, and US Treasuries—and walloped crude oil, which is always susceptible to selling pressure whenever there are fears of an economic slowdown. 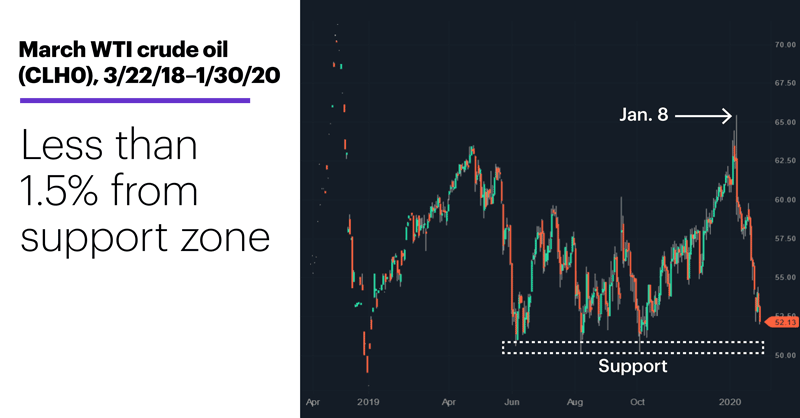 When it tumbled below $52/barrel on Thursday (chart above), the March WTI crude oil futures contract (CLH0) was down more than 20% from its January 8 spike high of $65.40 (tagged during the US–Iran confrontation). The following chart shows March crude is also approaching the support zone defined by the June, August, and October 2019 lows (roughly $50–$50.75).

While some bulls would be looking for another potential rebound off support, experienced traders are also likely aware of the potential for a momentum move to the downside if this zone doesn’t hold—especially since it’s in the vicinity of a whole-number price ($50) that may have more than a smidge of psychological significance (“Crude breaks below $50!” makes a nice headline).

Either way, there could be a lot of action around this level.

Market Mover Update: Following up on Wednesday’s 11% surge, Penn National Gaming (PENN) jumped another 10% yesterday morning before cooling off later in the session. The first estimate of Q4 GDP came in as forecasted at 2.1%, but 2019’s full-year GDP rate of 2.3% was the weakest in three years.

The biggest game in town?

01/29/20
Big sell-offs can sometimes be followed by big rebounds, and sometimes options can offer an additional edge.

01/28/20
As the coronavirus story spreads, we take a closer look at the market moves surrounding past outbreaks.