Many gaming stocks have bounced recently, and some gaming ETFs have rallied nicely off their early-August lows. The following chart shows two gaming stocks, Sony (SNE) and Take Two Interactive (TTWO), have put together especially solid 2019s. After sitting out the early part of the year’s rally, both have marched mostly higher since late February—especially TTWO, which completely ignored the May market downturn and bounced back almost immediately from its early-August pullback: 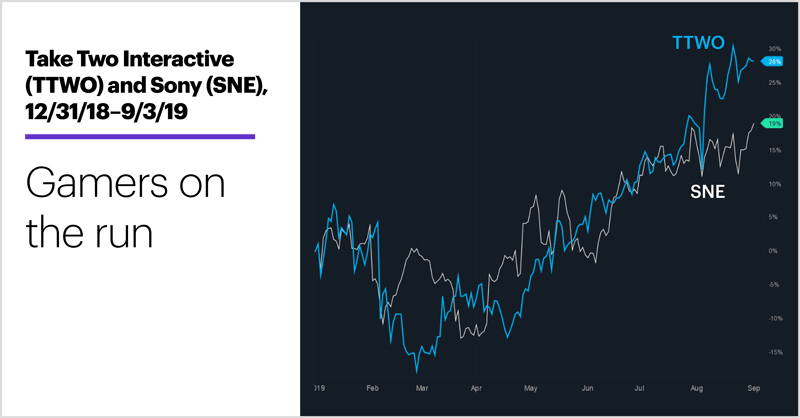 Gaming stocks have been the beneficiary of a couple of positive trends lately. One was the late-July media storm surrounding the Fortnite (that’s a game, by the way, in case you’re not a gamer) tournament that was ultimately won by—to the tune of $3 million—a Pennsylvanian teenager. More than anything, this event may have convinced “eSports” doubters that competitive gaming has a real future. One study projects 2019 eSports revenue to hit $1.1 billion this year—a 27% increase from 2018.1

And while it may be too early for you to be thinking about holiday shopping, every consumer business worth its salt is waaay past the thinking stage and is already preparing for the season to start. Bottom line, in the retail world, the holiday shopping season gets underway after Labor Day. The plans have long since been finalized, and now the marketing campaigns must be deployed. Take a guess as to when the most video games are sold?

One gamer that is perhaps more representative of gaming stocks that came back to earth after flying high in 2018 is Activision Blizzard (ATVI), makers of World of Warcraft and Call of Duty.

After hitting an all-time high of $84.68 on October 1, 2018, ATVI turned lower with the rest of the market, only more so. The stock’s share price was more than cut in half by the time it hit its early-February low, and it has since wandered in a wide trading range, roughly from $40–$50.

But the following chart shows that recently the stock again rallied to the top of its range (some would say above it, although range boundaries are usually fuzzier than they appear): 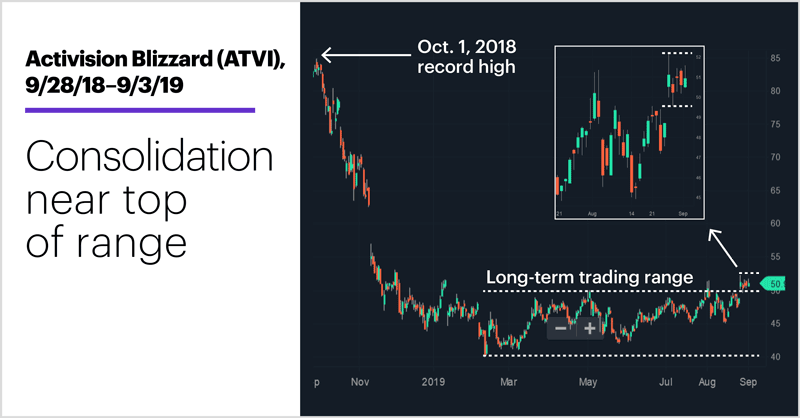 Although the stock has been stuck in that range for several months, it’s actually rallied 25% off its bottom since February—and more importantly, formed short-term consolidation near its top over the past week (see chart inset).

If you look at the stock’s previous tests of the top of the range, the were mostly followed by quick retreats. This time, after rallying more than 12% off its mid-August low and hitting its highest price of the year ($52.22) on August 27, ATVI has (as of yesterday) held its ground—a potentially bullish signal. Many technicians look for “ranges within ranges”—short-term consolidations near the upper or lower boundaries of larger ranges—as staging grounds for future price moves.

Accompanying the price chart story is the recent favorable press ATVI has received in the wake of its recent “nostalgic” re-release of the original World of Warcraft game from 15 years ago, which “broke the internet,” as they say—multi-hour login waits, 6.1 million unique views in its first 24 hours, and more than a million viewers watching the game at the same time that first day. Also, a Piper Jaffray survey showed that ATVI’s new Call of Duty was the title gamers were “most excited to play” in the coming year.2

That’s buzz. Barring another quick reversal by the stock back into its trading range, ATVI bulls may be sensing the possibility of a return to form, with the potential tailwinds of the holiday shopping season.

08/27/19
The straight dope on September, both this year and in years past.