From worst to first

From worst to first

Call options for Denali Therapeutics (DNLI) are a lot cheaper than they were a few days ago, thanks to the biopharma stock’s Monday–Tuesday retreat from last week’s record highs.

Still, as the following weekly chart shows, DNLI was still up more than 100% on the year after paring a  216% rally off its March bottom, which tested the stock’s July 2018 all-time low: 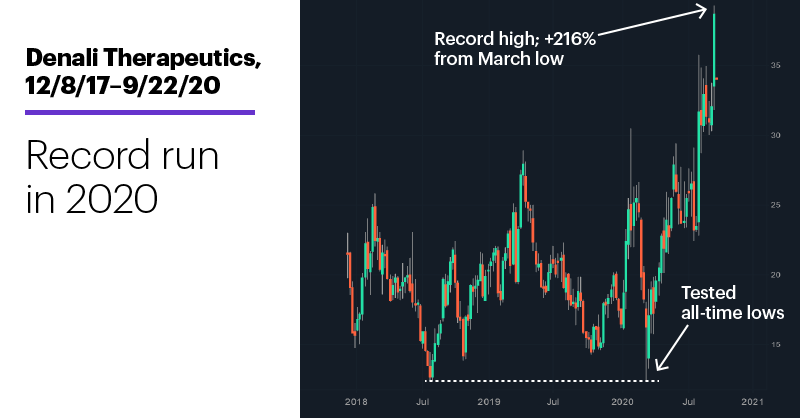 The stock’s personal run from worst to first in the space of six months essentially broke DNLI out of a huge, multi-year trading range from roughly $13–$26, with the last leg of the run-up occurring after Biogen (BIIB) announced in early August that it was pumping nearly a half-billion dollars into Denali to partner on a treatment for Parkinson’s Disease.2

That announcement shows up as the big up gap on the following daily chart, which sheds light on a few other aspects of DNLI’s recent price action: 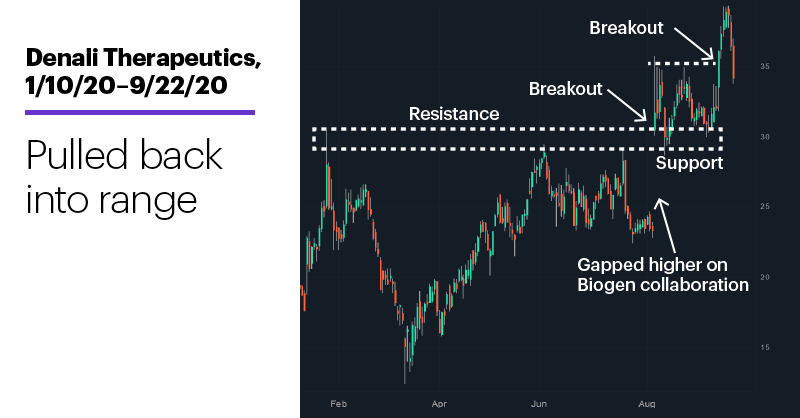 First, the up gap marked a breakout above the resistance zone containing the stock’s January and June highs. The stock then consolidated for two months, twice pulling back to—and rallying off—the resistance/breakout level that has now transitioned into support.

A second breakout—this one out of the more recent consolidation—pushed the stock to last week’s records, before this week’s pullback dropped shares back into that range.

Another test of a conspicuous technical level—and another pullback opportunity for bulls? Many traders would argue that since the stock has been more or less “following” the major technical guideposts on its chart for several months, these may continue to be useful until proven otherwise.

In this case, that logic could translate as: A retreat into the trading range that preceded last week’s breakout—as long as it ultimately didn’t extend too far below the bottom of the range (i.e., the August 12 low of $28.62)—would constitute a potential opportunity for DNLI bulls.

Such technical reference points are never the final word on what prices will do, but until they fail, traders tend to listen to what they have to say.

Market Mover Update: Tuesday’s existing home sales number for August topped expectations at six million—its highest level in more than 10 years. Homebuilders took the news and ran with it, including KB Home (KBH), which rallied to a new all-time high even before its after-the-bell earnings release (see “Housing stock rally gets a test”).

Stocks that stand out

09/22/20
Cloud provider gets a big boost—from a high-profile deal it’s not even part of.

So far, so September

09/21/20
Tech continues to weigh on market as stocks enter final stretch of the month.

Housing stock rally gets a test

09/18/20
Home is where the rally is—or, that’s where it’s been the past five months. Can homebuilders extend their gains?