Sometimes when you’re flipping through charts, scans, and news, you come across a ticker symbol more than once that you’ve never really noticed before.

Take Performance Food Group (PFGC), for example—a food service company that recently hit the radar for trading at a new 52-week high, and also showed up on LiveAction scans for symbols with high options open interest (OI). It topped that list yesterday with more than eight times its average number of open options positions: 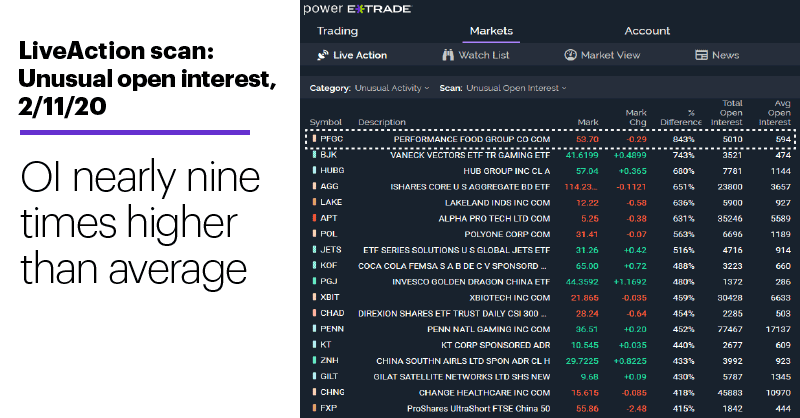 Unlike high options volume, which can be caused by traders getting out of existing positions, high and increasing OI can only mean traders are getting into new positions, which can reflect greater trader interest in a stock—potential fuel for the momentum fire, so to speak.

So, what may be making PFGC so interesting?

Truth be told, it’s probably been interesting to some traders for a while, considering it racked up a 60% return last year, gaining nearly 30% just between October 23 and the record close ($53.99) it made just two days ago. Three days before that, PFGC rocked and rolled when it released earnings, plunging briefly to a six-week low before recovering to close higher: 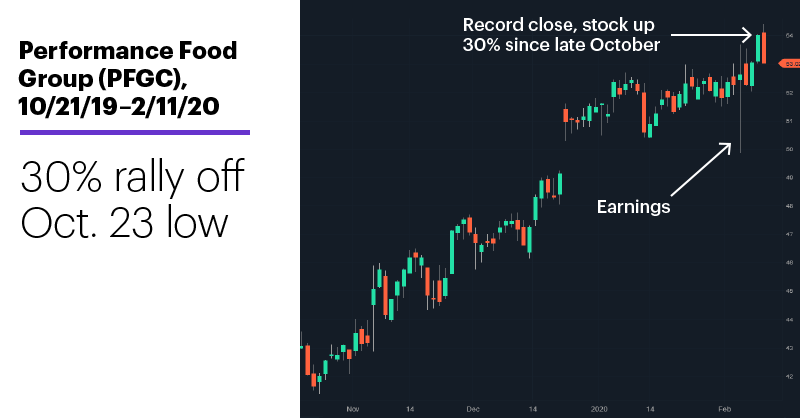 The company topped earnings, missed revenues slightly, and surprised the Street to the upside with its forward guidance.1 That positive earnings forecast isn’t insignificant, since it may explain why PFGC has gotten props in some circles as a “growth” stock even though it’s technically a consumer cyclical name. PFGC’s earnings are expected to grow nearly 14% this year—more than double the industry average of 6.4%.2

Getting back to the options for a moment, a little digging revealed that:

1. Across the February, March, June, and September expirations, calls were outtrading puts roughly 38 to 1.

If the long side of that open interest (i.e., traders who bought the calls) represents a bet on the stock rallying above the strike price, that would mean a projected up move of at least 3.7% above yesterday’s level (the average analyst target price is $57.33,3 around 8.1% higher).

Heavy bullish options trading (if, in fact, that’s what the OI represents) in the wake of an encouraging earnings release could mean some traders are positioning for another potential leg in PFGC’s recent uptrend—in which case down moves, like the one that unfolded yesterday, could be seen as welcome developments by players who may have just recently discovered the stock.

Market Mover Update: Look about two-thirds of the way down the LiveAction Scan and you’ll see Penn National Gaming (PENN), which jumped 5.8% on Monday and 2.4% intraday on Tuesday to hit $37.18—it’s first new record high since July 2018, and a 28% gain since January 29 when news broke it had acquired Barstool Sports to be the face of its sports-betting initiative.

Meanwhile, Eldorado Resorts (ERI) rallied more than 2% yesterday to its own record high, and sportsbook operator William Hill US announced it had partnered with CBS Sports to tap into the latter’s estimated 80 million users.4

02/05/20
Stock’s quick rebound from downside breakout raises the prospect of a bear trap.

02/04/20
Will earnings sell-off bring food-service stock’s bulls back to the table?

02/03/20
February kicks off with stocks battling their first downturn of the year, courtesy of the coronavirus.