Every four years, there’s always plenty of talk on the Street about how the stock market is likely to fare whether one candidate or the other occupies the White House.

It’s entertaining, for sure—talking heads dissect the stated “policies” of the candidates and extrapolate what that could mean for the economy and the markets. But aside from the fact that there’s always a big gap between campaign-trail promises and what any candidate ends up doing in office, there’s no real consensus about how much impact any president can have on the economy—and no way to concretely determine the connection, or lack of it.

Does the market shine any light on which person, or party, voters may favor?

In terms of a connection between the stock market and which party controls the White House, things are pretty fuzzy, too. We’re all now familiar with the fact that the US market has performed better under Democratic presidents than it has under Republican ones, but this headline ignores some (really) important fine print, such as:

1. What was the composition of Congress? Was it controlled by the same party as the president? The opposite party? Split? That makes a difference in terms of what a president can do.

2. Whether the statistics regarding market performance and political parties are skewed by a few anomalies, like the Great Depression and the impossibility of a presidential candidate winning four consecutive terms, as Franklin D. Roosevelt did.

3. The degree to which the electorate and the two major political parties have changed over the years. The US population in 1932 was roughly a third of what it is today, and its demographics were much different. The constituencies of the major parties have changed significantly, too—the South was heavily democratic until the second half of the 20th century, for example.

4. The market has evolved. Yes, markets are markets, but the Dow didn’t contain 30 stocks until 1928, and the S&P 500 and the Nasdaq didn’t exist then. In 1952, available data suggests less than 5% of Americans owned stocks; today that number is closer to 55%.1

Any one of these could reasonably cast doubt on the claim that one man or party is better or worse for the market than another. Together, they’re a pretty formidable argument for not betting your retirement fund on the outcome of an election.

That said, one of the more consistent aspects of this story has been the difference in the stock market’s performance in the first year after the election of democratic vs. republican presidents: Since 1932, the Dow Jones Industrial Average’s (DJIA) average return in the 12 months after a democrat wins the White House has been 9.03%, while it’s returned 2.14% when a republican wins (regardless of whether it’s a first or second term). That basic disparity holds true in the post-WWII period as well, and has been more significant since 1980.2

But what about looking at things from the other direction—that is, does the market shine any light on whether a particular candidate will win? There’s a hypothesis making the rounds that the stock market’s performance leading up to an election can serve as a thumbs up or thumbs down on the current occupant of the White House, or the party controlling it. Take a look at the following table, which shows the DJIA’s returns in the roughly two-month period from August 31 to the day before presidential elections: 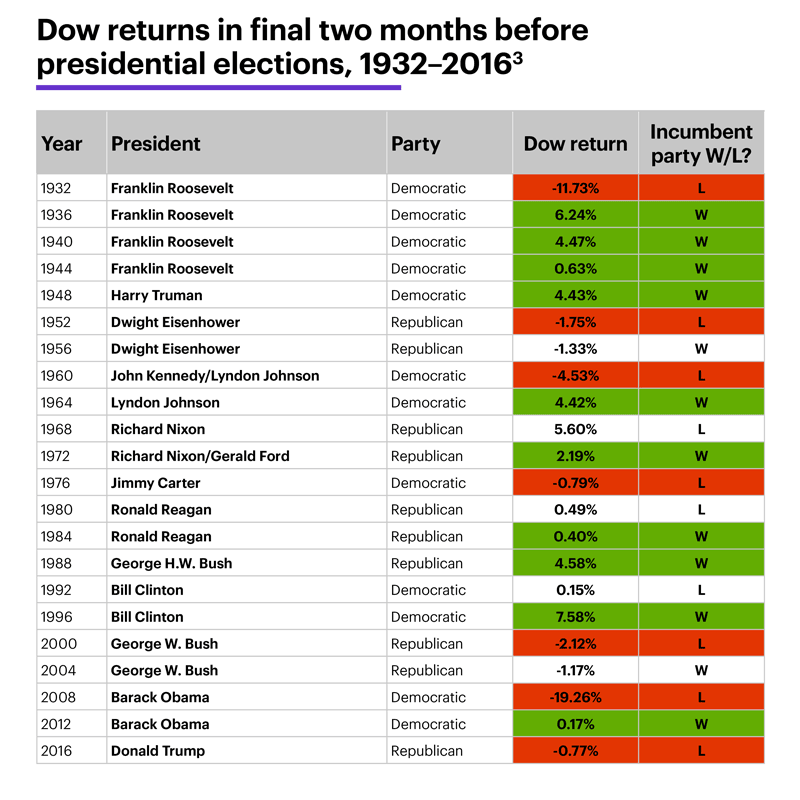 Besides the fact that 2020 hasn’t exactly been a run-of-the-mill year—i.e., all bets are off—it’s difficult to attach too much significance to any of the theories about the presidency and the markets. Aside from all the mitigating factors outlined earlier, one of the biggest problems is there have been only 22 presidential elections since 1932—a sample size no self-respecting statistician would touch with a 10-foot spreadsheet.

Maybe there’s a connection, maybe there isn’t. But experienced market players tend to focus on more tangible factors when making trading decisions. Elections, like the markets, are unpredictable.

2 Measured from the closing price of the day before a presidential election to one year later.

09/09/20
Traders often turn to the VIX in turbulent times, but it’s a good idea to pay attention to it when the market’s rising, too.