When a widely traded tech stock drops nearly 5% in early trading, there’s a good chance it will show up on a LiveAction scan for heavy put trading—precisely the situation Akamai Technologies (AKAM) was in yesterday morning: 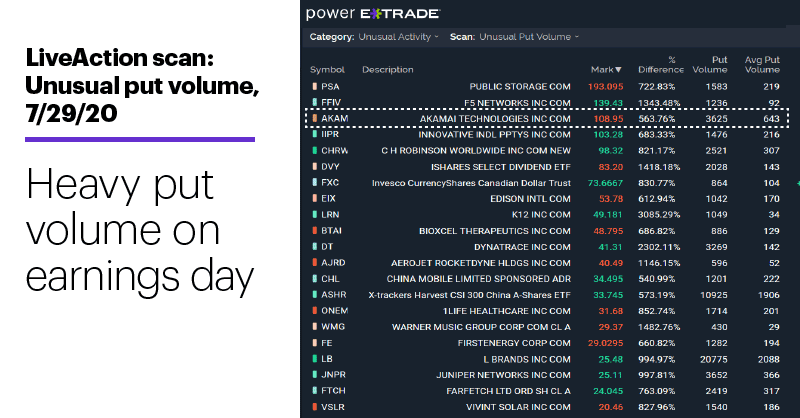 Wednesday was the cloud-security stock’s first day of trading after it released earnings Tuesday afternoon. Did bad numbers catch the market off balance? Far from it—AKAM topped expectations, with earnings increasing 29% to $1.38/share and revenue rising 13% to $795 million.1 Cloud-tech companies have been busier than ever as the world has been forced to migrate online to an unprecedented extent in recent months, and the performance of many of these stocks has reflected that new reality.

So what was up with that price drop and uptick in put volume? First, most of the volume was in weekly options expiring this Friday, with strikes between $103–$107—all of which, by the way, lost value yesterday even though the stock was still down 2.8% (a little below $109) at noon ET.

With just two days left until expiration, it’s questionable (but not out of the question) that traders would be piling into out-of-the-money puts in anticipation of an even bigger price drop in the next 48 hours. Given the potentially bullish implications of the earnings beat, though, some traders may have entertained the possibility that at least some of the options action consisted of traders getting out of positions—there wasn’t much volume in more-distant expirations, so they didn’t appear to be rolling their positions forward, for example. The price chart shows something interesting on this point, too: 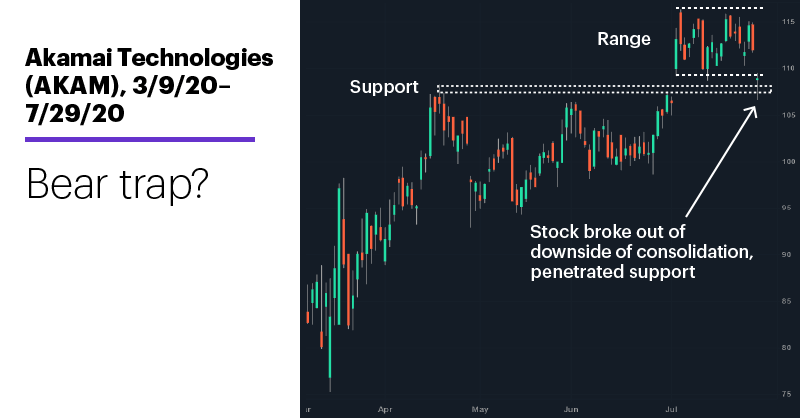 Yesterday’s early intraday sell-off dropped AKAM below the lower boundary of its recent trading range—a move that may have sucked in some short-term breakout traders—and also tested the support zone defined by the stock’s April–June swing highs.

Also, it’s a little difficult to see on the chart, but AKAM rallied intraday to get back into the upper reaches of the day’s range (by 2 p.m. ET it had cut its loss to around -1%). There are a few other recent instances of the stock dropping sharply below the previous day’s low and rebounding over the next few days or more (check out February 28, April 13, April 29, and May 27), a pattern that has been fairly consistent over the past 10 years:

●Of the 47 times AKAM has traded at least 2% below the previous day’s low but rallied to close in the upper third of the day’s range, the stock was higher 10 days later in 32 instances (68% of the time).2

Those stats suggest the potential for something many traders would have called out just by seeing the price action—a “bear trap,” whereby a downside breakout is quickly reversed and gives way to a near-term rally.

Regardless of whether they go long stock, buy calls, or short puts, those who attempt to trade a potential bear trap would be wise to avoid getting trapped themselves. One rule of thumb relied on by some technical traders is to use the low of initial breakdown (i.e., Wednesday’s low, in this case) as a risk point: Anything more than a minor move below that low could mean the bears were right after all.

07/29/20
Was yesterday’s heavy call options volume a sign of bullishness or classic misdirection?