Scouring the markets for “unusual activity” can sometimes lead you to a potential trading opportunity, even if it’s not necessarily the one you thought it would be. 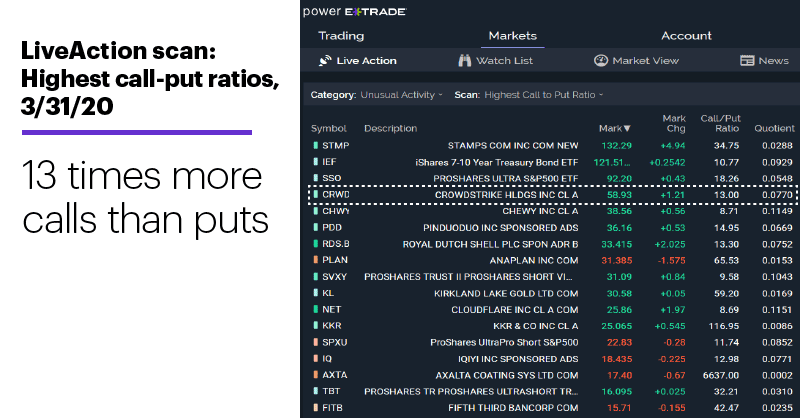 This type of activity could mean an increasing number of traders are playing the long side with call options, which could be bullish. Or, if the call buying is extreme, it can sometimes mean bulls are getting a little carried away and prices may be ripe for a pullback or downturn.

Or, none of the above: In this case, traders were getting out of existing April CRWD call positions, which although not necessarily bearish (could have been someone taking profits), doesn’t fall into the bullish category, either.

Not quite, because there’s still been a lot of other action in CRWD, as the following price chart shows. In a strange parallel to the situation in BridgeBio Pharma (BBIO) discussed in this space yesterday, CRWD—a fellow member of the IPO class of 2019—has spent several days consolidating after a huge rally off the all-time low it made in the middle of March:

The stock, which is still below the highs above $100 it made roughly three months after its June trade launch (see chart inset), jumped around 75% off its March 16 close—while the broad market was still tumbling to new lows. It then spent several days in an almost perfectly horizontal consolidation near the resistance level of its early March high.

Although last month’s market meltdown likely distracted many traders from paying attention to the quarterly numbers that were still trickling in at the end of the current earnings season, on March 19 CRWD released estimate-crushing numbers, posting positive earnings of $0.06/share when analysts had been expecting an $0.08/share loss, and exceeding revenue projections by more than 10%.1

But those earnings numbers (and speculation about them) may not have been the only thing driving the stock higher recently. As analysts have noted, as many people have had to shift to remote work options during the coronavirus lockdown, cybersecurity has gained renewed urgency.2

That said, CRWD’s recent pause near resistance—and yesterday’s intraday reversal into negative territory after being up solidly higher on the day—could have traders pondering the possibility of a give-back of some of that monster rally, even if the bulls hold sway in the long term.

Market Move Update: BridgeBio Pharma (BBIO) didn’t give back any of its recent rally yesterday.  The stock jumped nearly 9% and closed at its highest level since March 5.

03/31/20
After a sell-off and a huge rebound, is the recent consolidation in this bio pharma IPO the calm before its next volatility storm?

A bounce for the ages

03/30/20
Stocks stage historic rebound as stimulus efforts kick into high gear. But don’t bet on the rollercoaster ride being over just yet.

View from the market trenches

03/27/20
The volatility continues, although lately it’s been the kind most traders like. Find out how the market’s dynamics may be shifting.