A late-September bounce that spilled into the first day of October took a step back on Friday after news that President Trump and First Lady Melania Trump tested positive for coronavirus, and the release of a so-so monthly jobs report.

Even so, the S&P 500 (SPX) battled back to trim an early 1.7% intraday loss, holding on to enough of the gains it had racked up through Thursday to post its first up week since August 28: 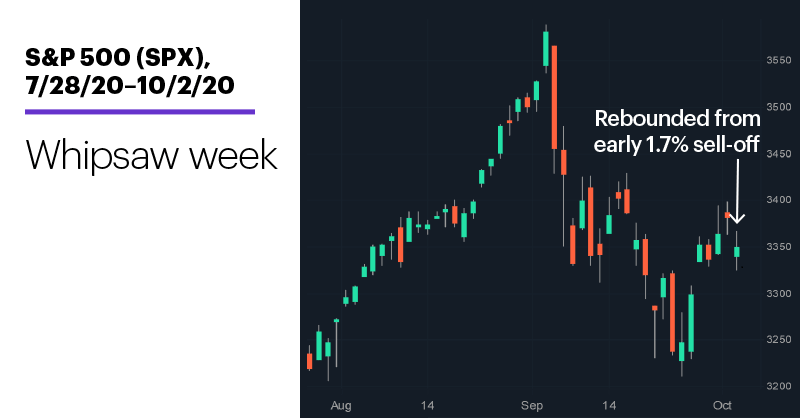 The fine print: Fiscal stimulus continues to be a wild card for the market. Stocks enjoyed gains last week thanks in part to hopes that Congress and the White House could hammer out a new coronavirus-relief package (the market rallied off Friday’s lows following House Speaker Nancy Pelosi’s “We’ll get the job done" comments1), with intermittent reports of impasses weighing on the market.

The number: 661,000, the number of jobs the US economy added in September—well below the 859,000 estimate. On the plus side, the August jobs number was revised higher from 1.37 million to 1.49 million, and the unemployment rate dipped from 8.2% to 7.9% last month (although the labor-force participation rate also dropped).2 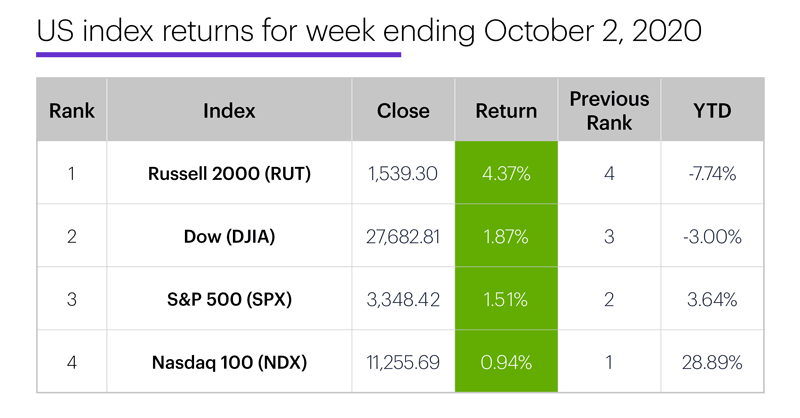 Futures action: December gold (GCZ0) reversed to the upside last week, gaining around $40 and climbing back above $1,900/ounce for the first time since September 22. A sharp Thursday-Friday sell-off dropped November WTI crude oil (CLX0) a little below $37/barrel to a test of its mid-September lows. December US dollar index futures (DXZ0) bounced early on Friday but still retreated around 0.9% the week, closing below 94.

Traders will get a look at the minutes from the Fed’s September FOMC meeting, but it may be an item not on this week’s calendar—fiscal stimulus negotiations—that they watch most closely.

This week’s earnings include:

What may be in store for Q4?

We’re in the final stretch of 2020—the fourth quarter of a year that, even if the market sat on its hands until December 31, has already guaranteed its place in the history books.

But with the November election now less than a month away, potentially trillions of dollars in fiscal stimulus still up for debate, and second-wave COVID concerns pushing to the fore as we get deeper into fall, it’s hardly shaping up to be a quiet Q4.

Given the magnitude of the COVID sell-off earlier this year—and the market’s September pullback—many market watchers may be surprised to learn that the S&P 500’s (SPX) year-to-date return through Q3 was 4.1%—just a little less than the 4.4% average from 1960–2019.

There have been eight other years since 1960 with YTD returns through Q3 similar to this year’s (positive but modest—say, 5% or lower). That’s not a lot to go on, but it's nonetheless interesting that:

1. The SPX had positive Q4 returns in all eight of these years, although 1984 was a squeaker—the index gained just an additional 0.7% in the fourth quarter.

Finally, from the For-What-It’s-Worth-Department: The SPX’s -3.9% return last month was the index’s worst September since 2011 and its 13th-worst since 1960. The SPX posted a net gain in October after eight of the 12 Septembers that were worse than last month.

10/01/20
Semiconductor stock’s recent underperformance may be attracting the attention of opportunistic contrarians.