One well-known guideline for momentum traders is to ride the strongest individual performers in a strong sector until that momentum has run its course.

Besides being much easier said than done, some contrarians would present this alternative: Look to buy formerly strong stocks that have been underperforming their sectors recently. Unless there’s a reason to expect continued underperformance, it may be a chance to capitalize on the stock’s potential return to form. Again, easier said than done—and not without its risks.

In the still-strong (despite September’s pullback) semiconductor space, straight-up momentum players have likely been drawn to stocks like Nvidia (NVDA) and Advanced Micro Devices (AMD) in recent months. Both skyrocketed off their March lows and have outperformed the chip sector by a wide margin. 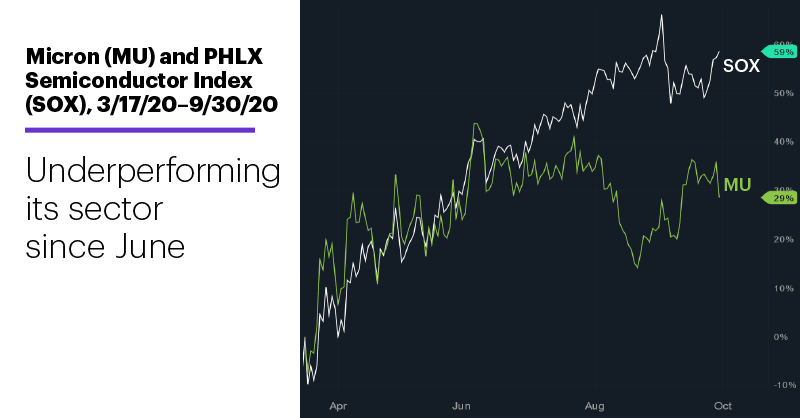 But traders with a contrarian bent may have noticed Micron (MU) yesterday, which took a hit after releasing earnings, falling more than 7%. Although MU has outperformed the chip sector in the long term—for example, since the 2009 bear-market bottom or the 2016 market lows—it’s struggled more recently. The chart above shows that while MU often led the PHLX Semiconductor Index (SOX) in the early stages of the rally off the March lows, it began lagging in June.

Yesterday’s sell-off—which occurred even though MU topped earnings and revenue estimates1—dropped the stock to a nearly one-month low: 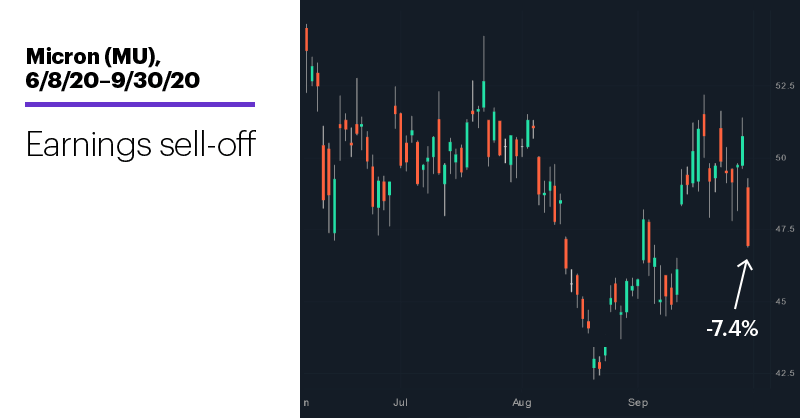 Although the company’s disappointing guidance for early 20212 may have encouraged sellers yesterday, long-time MU traders were probably aware that the stock has a track record of post-earnings declines:

●In the first week after its 40 most-recent quarterly releases, MU posted a median return of -2.7%, with most of the damage coming in the first four days.

But that performance looks a little different in the context of a slightly longer-term stat:

In other words, traders who already thought MU had the potential to close the gap on the chip sector may see its recent weakness as an opportunity rather than a setback.

A final note: Although “gaps were meant to be filled” is an old saying that doesn’t necessarily hold water, dedicated chartists would probably point out that MU has, in fact, filled the majority of its price gaps since June in timely fashion—except for the big mid-September up gap it dipped further into yesterday.

The September-October connection: Investors nervous about October after the market’s first negative September since 2016 (and its weakest since 2011) may be interested in this tidbit: The S&P 500 (SPX) has gained ground in October after 14 of the 20 worst Septembers since 1958, with a median gain of 4.3%. By contrast, after the 20 strongest Septembers, October was positive only 12 times and had a median gain of only 1.2%.

Another twist: On average, October was weakest (although still positive) after “meh” Septembers—the middle 23, which had returns ranging from +1.9% to -2%. October was up after only 13 of these Septembers, with a median return of 0.9%.4 Possible moral of the story: If you’re eager for a bullish October, hope for a below-average or above average September. Plain-old “average” doesn’t seem to cut it.

2 Barron’s. Micron Earnings Point to Better Times Ahead. Why the Stock Is Dropping. 9/30/20.