Real estate investment trust (REIT) stock Store Capital (STOR) popped up on a scan for high put-call ratios yesterday morning, when around 17 puts were trading for every call: 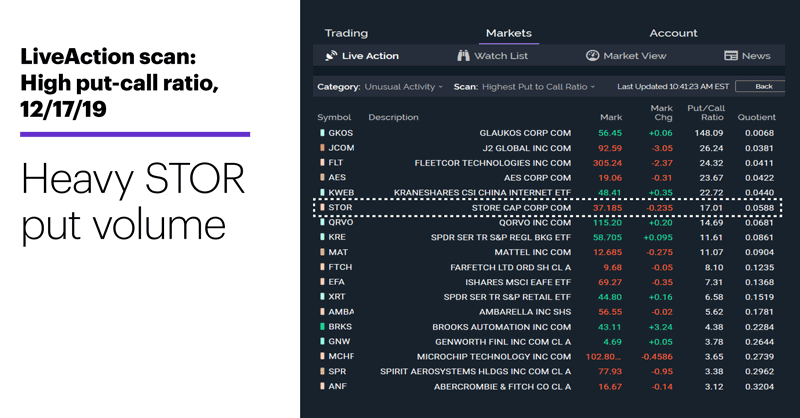 Like any other indicator or piece of market information, the put-call ratio—the number of put options traded relative to call options—has to be placed in context to have any meaning.

While heavy put volume relative to calls may sound bearish (if traders are buying more put options, it stands to reason that at least some of them are doing so to protect against downside risk), very high put-call ratio levels are often used as contrarian buy signals, since they sometimes occur when the market or an individual stock has sold off sharply and investors are really freaking out—the kind of sentiment extreme that can occasionally accompany a price reversal.

That dynamic suggests that if you’re attempting to use high put-call ratios as potential buy signals, you should be looking at markets that have sold off. After all, investors tend not to “freak out” when their stocks are rallying, so high put-call ratios in rising stocks (which includes many of the tickers from yesterday’s scan) shouldn’t necessarily be viewed as signs of a potential bearish sentiment extreme.

But the chart below shows that STOR, in fact, recently pulled back quite sharply, dropping around 10.5% from its November 29 all-time high of $40.96 to Monday’s low of $36.65—the stock’s biggest pullback since December 2018.

The close-up of the most recent price action in the upper left of the chart also shows that on both Friday and Monday the stock rallied off its intraday lows to close toward the top of each day’s range, a possible sign that bulls may have been probing the upside: 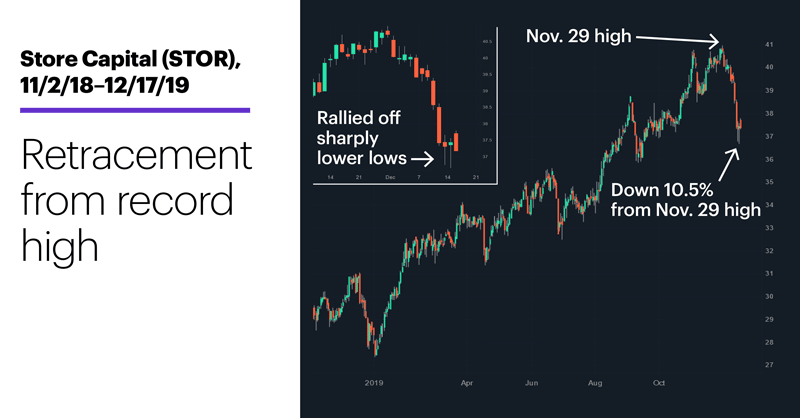 The stock was down again yesterday, but held above the Friday-Monday lows—a line in the sand short-term traders will be watching. If it can hold that level, there may be enough nervous put buyers and short sellers in the market to fuel a near-term snap-back rally if bulls maintain upside pressure.

STOR, which specializes in commercial real estate leasing, is still up around 34% on the year and up 65% from its February 2018 low. With relatively low interest rates seemingly in place for the foreseeable future, STOR could be in a potential business sweet spot, since REITs typically use low interest rates to refinance their debts.1

The company last released earnings on October 31 (topping estimates) and won’t put out numbers again until February—there are no other obvious catalysts on the stock’s near-term calendar. But there has been at least one recent purchase of the stock by a company insider,2 something bulls never mind seeing.

Now we’ll see if the stock has dropped enough to entice other traders.

12/16/19
Stocks back to record highs amid trade optimism and a hands-off Fed.

A dollar for your thoughts