Stocks started out the new year the way they usually do—to the upside—but some were a little more turbo-charged than others, including Aerojet Rocketdyne (AJRD), a lesser-known aerospace and defense name that jumped more than 2% intraday on Thursday.

Yesterday’s gains extended AJRD’s rebound off its December 27 pullback low—a down move that some traders will see as a successful test of the stock’s breakout from its recent trading range—and pushed shares to their highest point since mid-October: 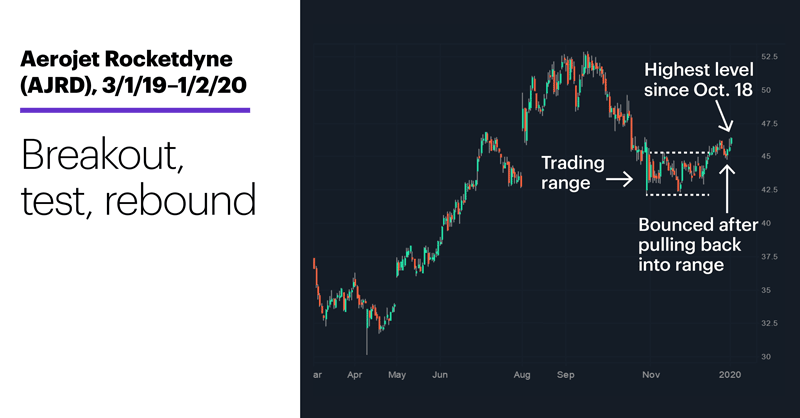 Essentially, after a stock breaks out of a range, many traders will wait for prices to return to the breakout level to avoid buying into in a potential “false breakout” that ends up going nowhere. But if the stock instead turns up after “testing” the breakout point, some traders see it as a signal that bulls are committed to the up move.

Aerojet (known as GenCorp prior to April 2015) hit an all-time high of $52.84 in September. And here’s a fun fact: The April 2019 spike low toward the left edge of the chart marks an 11.5% intraday drop that occurred after a short-selling firm targeted AJRD, arguing the stock should be 40%-60% lower.1 The stock had rallied 75% off that low by the end of August, and was still more than 54% above it as of yesterday. 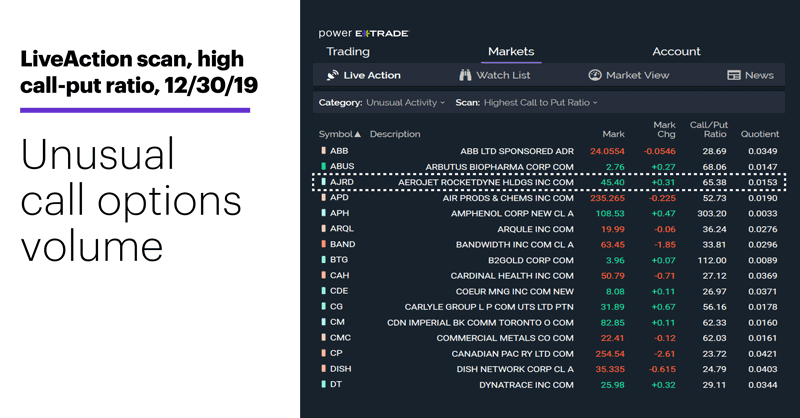 As of yesterday, the biggest hunk of existing options positions (more than 2,000 contracts) was in the January $50 calls, suggesting some option traders were potentially looking for the stock to rally at least to this level over the next two weeks.

That time window may be significant, since many aerospace and defense stocks announce their quarterly numbers in the second big wave of earnings season, after financial stocks report. AJRD hasn’t scheduled its next earnings announcement, but several major aerospace players, including Northrop Grumman (NOC), Lockheed Martin (LMT), Raytheon (RTN), and General Dynamics (GD) are slated for the final days of January. Aerojet bulls may be looking for a move to play out amid a hoped-for New Year’s rally, and before the sector’s earnings-season volatility kicks in.

Some traders may think AJRD’s rally over the past few days means the stock has likely already fired its boosters. They could be right, but others may argue that if prices hold above the recent pullback low, AJRD could continue to try to escape the gravitational pull of its recent range.

12/31/19
January rallies aren’t layups, but the past may hold some clues about how the month tends to unfold.

12/30/19
Don’t forget to keep tabs on how momentum may rotate through different market sectors in the coming year.