Traders and investors have been subjected to seemingly ever-increasing levels of stock-market volatility this year, and over the past couple of weeks they’ve been treated to a steady stream of reminders of how close the S&P 500 (SPX) is to a bear market.

While the S&P 500 (SPX) hasn’t officially closed in a bear market, it dipped into one on an intraday basis last Friday, falling more than 20% below its January 3 record close before rebounding: 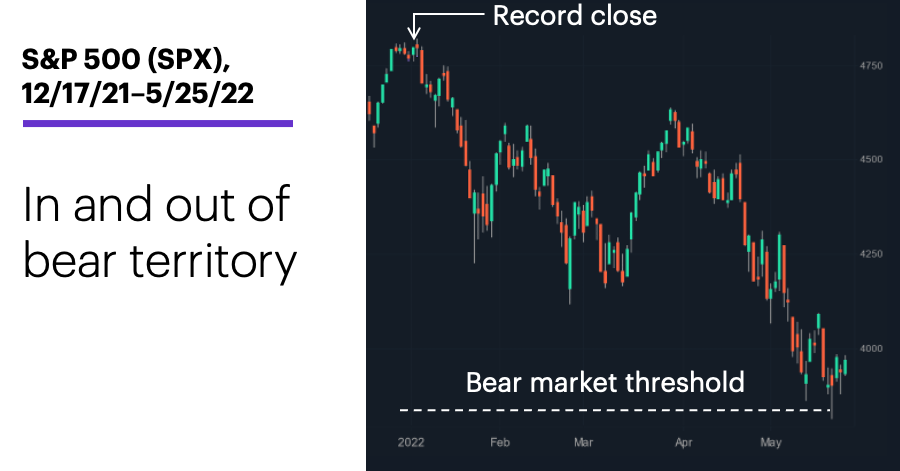 First, it’s important to note that the -20% threshold doesn’t have any particular significance, other than being a handy round number to mark sell-offs that don’t happen very often. After all, a 19% or 21% (or 18% or 22%) decline would feel much the same as a 20% decline to most investors, and what happens after such moves doesn’t vary much if you define a bear market as an 18.7% decline, a 20% decline, or a 21.6% decline. That said, while many investors would argue we’ve been in a bear market for a while, it’s worthwhile to look into what traders can expect if and when the SPX crosses the -20% threshold.

Crossing the bear-market threshold was always followed by additional downside, but more often than not,  the worst of the selling was over at that point. 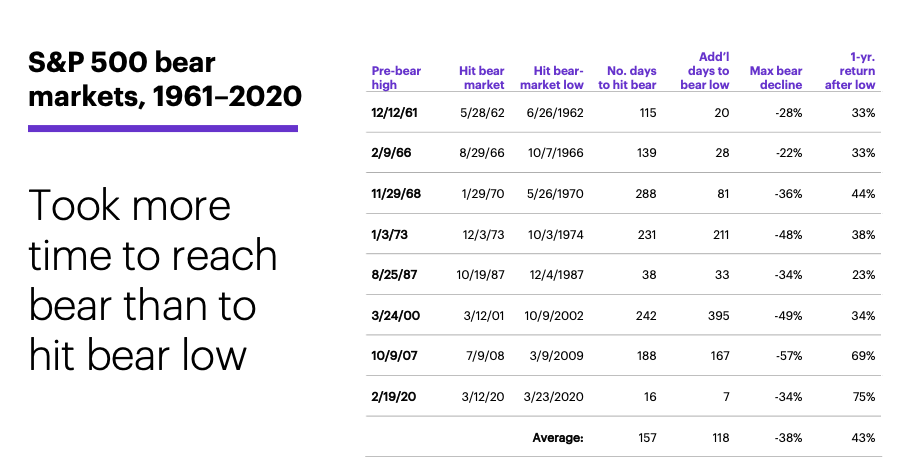 Source (data): Standard & Poor's. (For illustrative purposes. Not a recommendation.)

While it’s possible the current correction could turn out to be deeper and longer lasting than any of the others over the past 65 years, these examples suggest that by the time the SPX fell 20% below a previous high, the market often had less downside ahead of it than behind it. Consider:

In other words, although the market always fell more after “officially” entering a bear market, by the time it crossed that threshold, traders and investors had—more often than not—already experienced the worst of the selling.

That’s especially important for longer-term investors. Even though no one can pinpoint when a downturn will end, exiting the market to avoid further downside can mean missing out on larger-than-average gains on the way back up.

Market Mover Update: PepsiCo (PEP) rallied for a third-straight day, bringing its gain for the week to around 4% (see “Synthesizing a long trade”).

Holiday reminder: Monday is Memorial Day—US markets will be closed. (Also, US bond market will close early (2 p.m. ET) on Friday, May 27.

Keeping tabs on the VIX

05/20/22
When bears appear to be in control, many traders keep their eyes on the volatility index.