For traders who track seasonal patterns, April has probably added to the feeling that the stock market has thrown out the “rulebook” so far this year. While April has historically been one of the more bullish months of the year, this one is running the risk of being the S&P 500’s (SPX) weakest month since March 2020, and its worst April since 1970.1

And with May just two trading days away, traders are likely pondering what effect, if any, the market’s most recent downturn could have on a month with a less-than-bullish reputation. While we’re nearly two generations removed from May consistently being one of the weakest spots on the market calendar, it still hasn’t tended to be a month that has significantly padded the annual returns of stock investors.

The following chart shows most of the bearishness occurred in the years up to 1983, when the SPX lost ground in more than 60% of Mays, and the month’s average return was -1.2%—the worst of any month of the year: 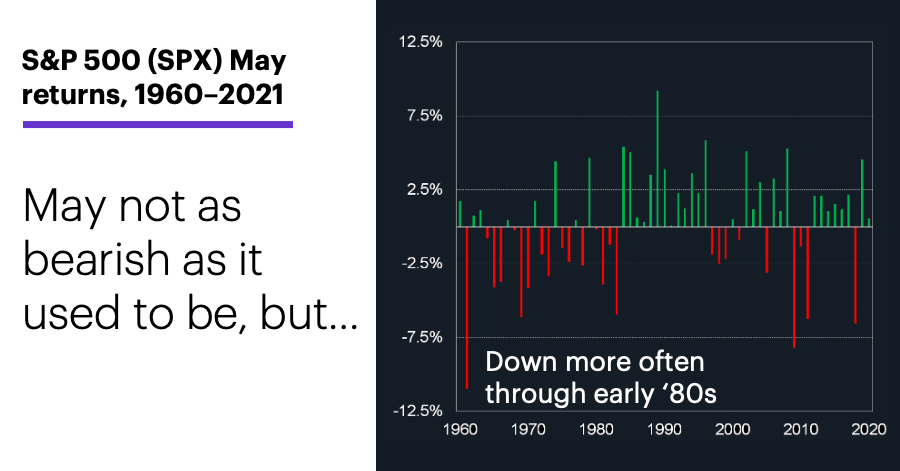 While it may be natural to think the market may snap back after such a negative April—and it certainly could—the numbers suggest bulls should remain vigilant. Overall, up Aprils have often been followed by up Mays, and down Aprils and have tended to be followed by down Mays.

Finally, as of yesterday the SPX was down roughly 7% for the month. While there have been only six previous Aprils with monthly losses of -3% or more, each of them were followed by negative Mays.

04/25/22
Market stumbles into last week of April amid inflation and interest rate concerns.

04/21/22
Legging into spreads carries unique risks, but in certain situations it may also give traders more flexibility.