Charting its own course?

Charting its own course?

After a strong start, US stocks lost some of their mojo yesterday, but some areas were harder hit than others—like airlines, which have (mostly) lost altitude since their huge November–December runup as vaccine enthusiasm played out across the market.

Spirit Airlines (SAVE), Delta (DAL), and United (UAL) all fell 3% or more intraday yesterday, although SAVE has separated itself from its peers so far this year: 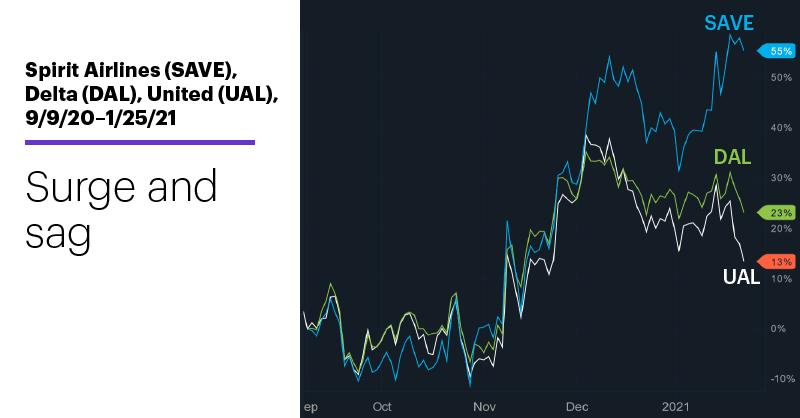 Airlines have been on the front lines of pandemic market action for nearly a year—initially, as the face of the brutal February–March sell-off as travel restrictions decimated the industry, more recently swinging higher or lower depending on the state of “return to normal” sentiment.

Although few market watchers appear to think the airline industry doesn’t still face headwinds, some recent developments, including Delta’s announcement yesterday that it would bring back hundreds of previously furloughed pilots this summer,1 may encourage industry bulls.

Those anticipating the group to at least challenge their December highs may have noticed the relative strength in stocks like SAVE, which has not only outperformed most other airlines since the late-October lows, but has already pushed slightly above last month’s highs: 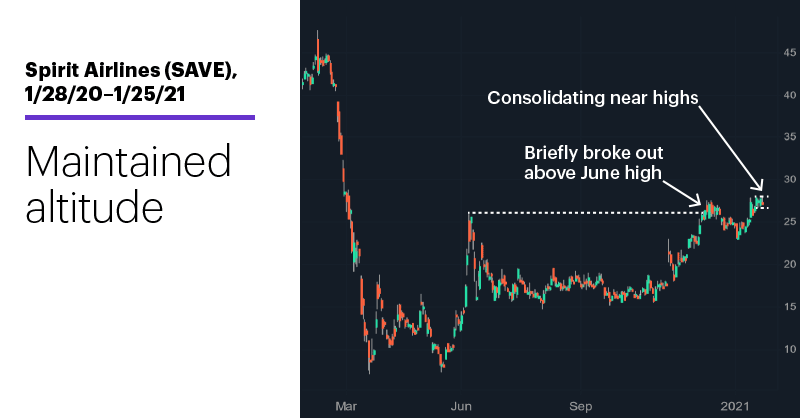 And as luck would have it, we’re getting into the thick of airlines reporting season: DAL and UAL have already reported their numbers, Southwest (LUV) and American (AAL) are scheduled for later this week, and SAVE is on tap a week from tomorrow (February 3).

Both DAL and UAL gained ground in the days leading up to their releases (the former more than the latter), then turned lower. SAVE appears to have a similar tendency: It’s posted a gain in the five days before an earnings release 22 of 37 times since 2011, but declined 25 of 37 times in the five-day period after earnings.2

Just something traders may be considering when deciding if, or when, to hop on board an airline trade.

Market mover update: Sure, it’s only one day, but the Nasdaq 100’s (NDX) ability to close at a new record high yesterday while the Russell 2000 (RUT) and the rest of the market struggled to stay in positive territory was in line with the potential relative strength shift noted in “Rebound week.”

Toyota (TM) started off the week by sliding its lowest level since December 10 (see “Options on wheels”).

01/22/21
Stock’s consolidation sets up potential breakout trade, but some options may offer more of an edge than others.

01/21/21
This automaker’s surging options volume may have caught the eyes of traders, but those who didn’t pay attention may have gotten the wrong impression.