It’s a difficult question to answer, since 2020 was, in many respects, truly a year without precedent.

When the S&P 500 (SPX) closed at a new record high of 3,699.12 on December 4, it marked a 60.5% gain from March 20—the index’s largest-ever gain in a 37-week period. In fact, there have only been a few other 37-week rallies larger than 50% over the past six decades, and as soon as you look for even marginally comparable rallies that were also preceded by eight-week, 30% sell-offs, like this year’s…well, the list doesn’t get any longer. 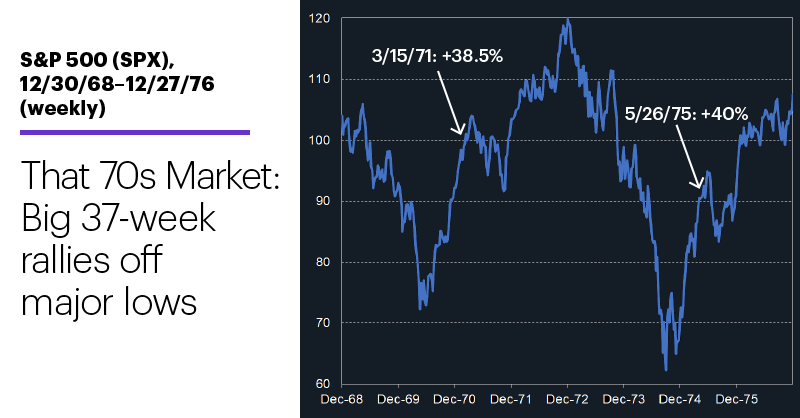 The chart highlights two key characteristics common to many of these moves:

1. Although both rallies kept going a little while longer after hitting the 37-week mark, they were interrupted by fairly significant pullbacks within a couple of months.

2. However, in both cases the market also resumed its uptrend and posted significant gains over the next year or so.

The numbers support this general picture: While the SPX’s median six-month return is around 4.5%, its median gain after the big 37-week rallies was only 0.10%. A full year later, though, its median return was a little above 8%, which is not too far removed from its long-term average.1

As always, there were exceptions. The SPX barely paused after rallying more than 34% in the 37 weeks ending February 18, 1983 (the real beginning of the 1980s bull market), for example, and a year after its 1987 rally the index was still in the red.

But overall, the market’s typical behavior after these events may be, on the whole, relatively encouraging for bulls: Stocks often kept climbing after rallies like the one that unfolded this year, but they rarely did so without experiencing some significant setbacks in the process.

12/24/20
How has the stock market performed in the first years of first-term presidents?

An eye on the futures

12/23/20
You never know where the big moves will come from in the futures market.

12/22/20
The holidays may be here, but over the years, stock market bulls have tended to stay on the clock.