Summary: Cryptocurrency began as a decentralized digital money used to make payments online, although its use has evolved. While it’s still a very nascent asset class, it’s recently made big strides toward maturity in financial markets. We break down the history and types of cryptocurrencies—and some of the investing risks to consider.

The swift and sudden rise of cryptocurrencies is hard to ignore.

This new asset class has ushered in a range of opportunities, piquing many investors’ interest as a way to enhance and diversify portfolios. It’s also presented significant risks that market watchers should take the time to fully understand.

While it can serve other purposes, cryptocurrency, commonly called “crypto”, is decentralized digital money that uses blockchain technology to make peer-to-peer payments. Cryptocurrencies like Bitcoin are created through a process called mining, which uses computer power to solve complicated math problems that ultimately produce a fixed supply of virtual coins. While many cryptocurrencies are created in the same way, some others may be created through different methods.

The first cryptocurrency, Bitcoin, launched in 2009 and it continues to be the most well-known digital currency. While Bitcoin claims about two-thirds of the cryptocurrency market, there are roughly 10,000 alternatives such as Ethereum, Tether, Binance Coin, and Dogecoin, to name a few.

Today, some cryptocurrencies could be classified more as currencies, others more as securities, and still others somewhere in between. 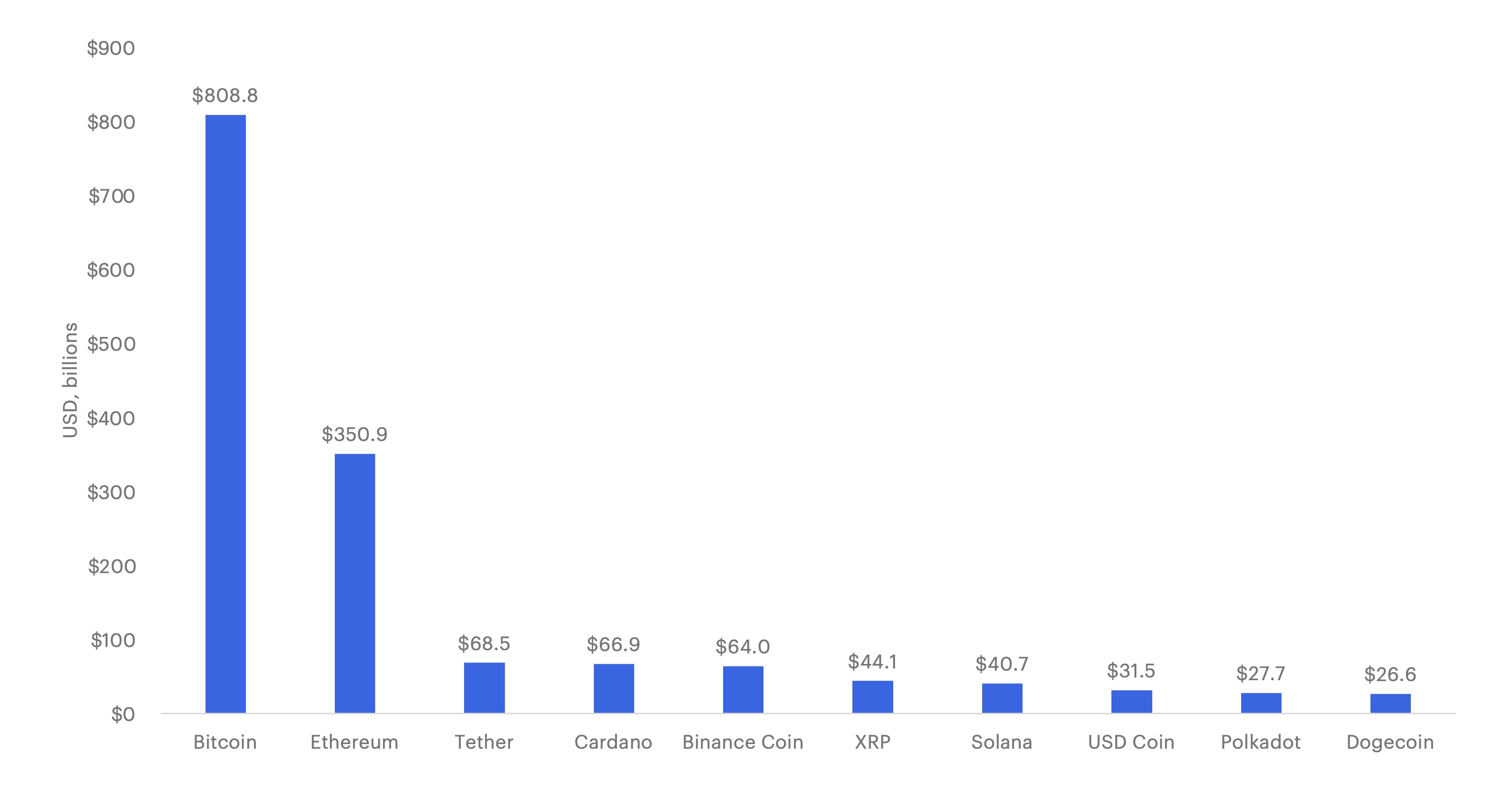 Unlike the US dollar, cryptocurrencies have no physical form, aren’t stored in a central place, and aren’t governed by a central authority such as the Federal Reserve.

The blockchain is vital to crypto’s decentralized nature. Every crypto transaction is recorded in the blockchain—a public ledger available to other users—and a new “block” is added to the chain with the most recent transactions. In Bitcoin, blocks occur every 10 minutes, but it varies from cryptocurrency to cryptocurrency. There are thousands of copies of the blockchain file on computers around the world, making it extremely hard to alter.

While traditional currencies use a trusted third party such as a credit card company or bank to verify that the funds are available to complete a transaction, cryptocurrencies rely on a network of computers to confirm the spender’s coins and the transaction. The method by which a particular cryptocurrency network ensures validity of transactions on that network is known as a consensus mechanism.

Cryptocurrency has evolved significantly since Bitcoin hit the mainstream media in 2013. It has seen several setbacks, from hacks to regulatory challenges, as well as successes such as increased adoption by institutions.

In 2014, Mt. Gox, which was once the largest Bitcoin exchange in the world, was hacked, widely exposing security vulnerabilities in the industry. Over the next two years, however, blockchain became increasingly recognized as an important technology, with startups in the industry drawing major investment from venture capital firms.

In 2017, investors were reminded that cryptocurrency could be affected by government action, when China rattled the market by shutting down Bitcoin exchanges. Meanwhile, in the US, two major exchanges began offering Bitcoin futures.

Cryptocurrency made further strides in gaining mainstream approval in 2020. A leading payments company started allowing users to buy Bitcoin and a mid-cap technology company reported it had added $250 million in Bitcoin to its balance sheet.

Crypto has evolved since hitting the mainstream media in 2013 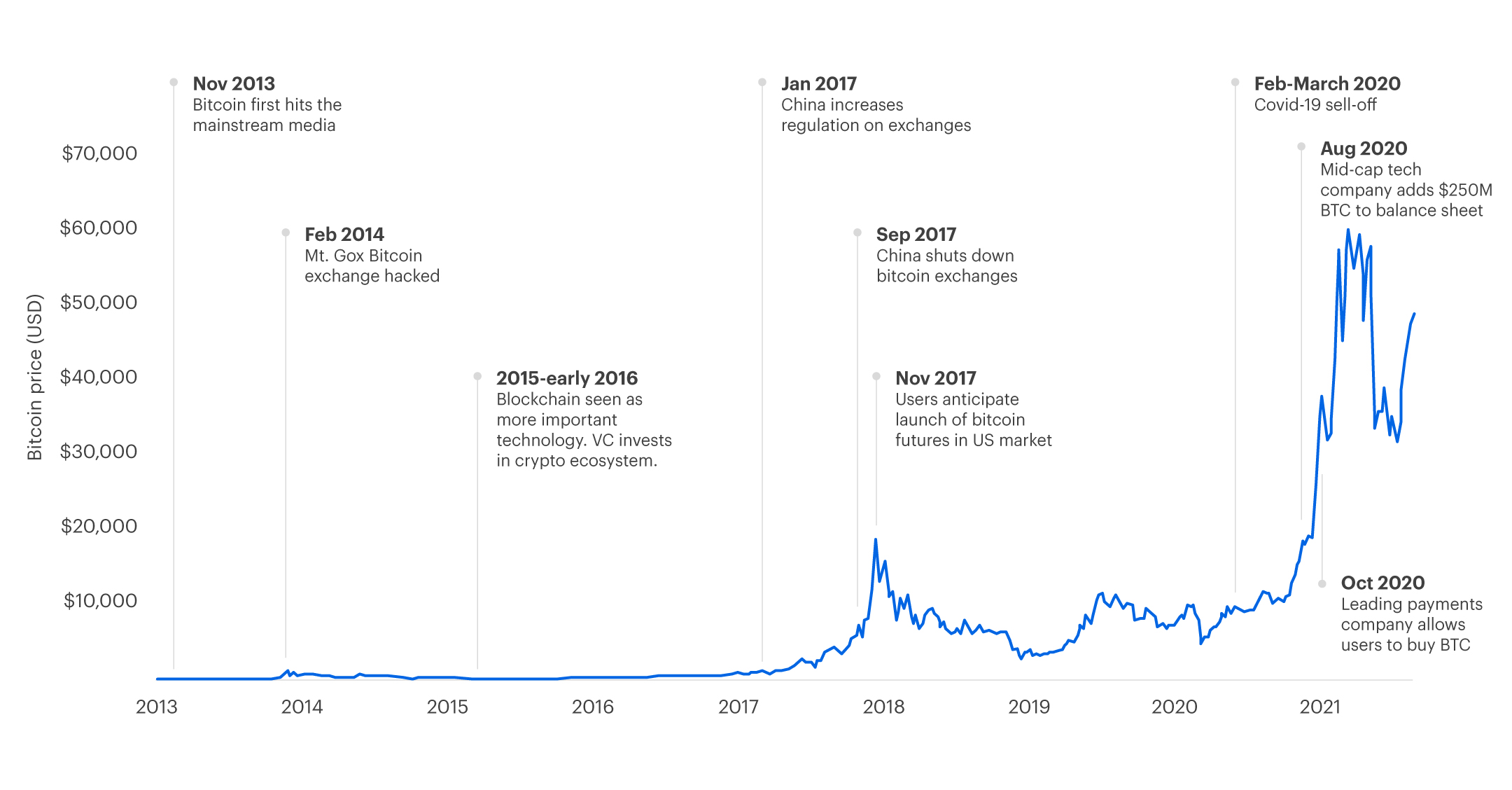 Some risks unique to cryptocurrencies include, but are not limited to:

Additionally, because cryptocurrencies are relatively new, there may be unforeseen risks in the future that are not evident now.

Investors who want to pursue opportunities in cryptocurrencies should proceed with caution. Before getting started, investors should get educated and consider how and whether cryptocurrency exposure may fit into their portfolio in a way that aligns with their risk tolerance and financial goals.

The basics of Bitcoin

Bitcoin is a digital currency that commands the majority of the crypto market. We explore the history and evolution of Bitcoin, along with investing considerations for this volatile asset.

The price of cryptocurrencies is impacted by supply and demand. Below we look at several factors that may affect the price of Bitcoin.

The amount of money a bond issuer agrees to pay the investor at the bond’s maturity date. Also commonly referred to as “face value” or “par value”
This is who is borrowing the money. An issuer could be the United States government, a state or municipality, or a corporation.